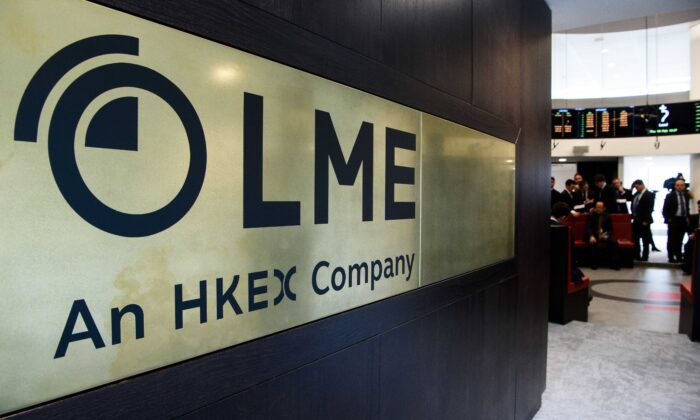 A sign for the London Metal Exchange (LME) on a wall by the new Ring, the open trading floor of the LME following its relocation in central London on Feb. 18, 2016. (Leon Neal/AFP via Getty Images)
Thinking About China

Away from the battlefields of Ukraine, a battle is taking place on a global exchange for what exactly constitutes a market and its rules. China, long known for manipulating its domestic market and cheating on global markets, is taking that to a new level by protecting Chinese firms from trading losses.

The London Metals Exchange (LME) is a futures and forwards commodity market, which traces its origins back to the 16th century and trades primarily basic metals like aluminum, steel, and nickel. Since 2012, the LME has been owned by the Hong Kong Exchanges and Clearing (HKEX).

The HKEX counts as LME’s influential controlling shareholder through near-complete control of the board, the Hong Kong government. Hong Kong is now effectively run by the Chinese Communist Party, and it must protect Chinese firms.

When the nickel price nearly doubled in an hour on March 8, the initial thinking was this was some order matching or technical glitch and not a result of market fundamentals. However, news quickly started emerging that a major Chinese miner, Tsingshan Holding, had made an enormous, short bet that prices would drop. With the contract closing, the company quickly tried to cover its contract and lost billions in the process, rapidly pushing the price.

Now approaching two weeks of minimal trading due to regular market shutdowns, the LME and HKEX are rapidly losing credibility. It appears they are halting trading to protect an effectively bankrupt Chinese firm. Traders worldwide can tolerate a lot of risk and volatility, but they do not trade where they do not feel they are treated fairly. There are too many other venues.

So what are the potential outcomes with the LME shutting trading to protect a bankrupt Chinese miner?

First, this is a significant legal and credit risk to the LME and HKEX. Markets generally have wide latitude contractually to ensure smooth functioning markets. However, canceling trades in the days leading up to the price jump and even appearing to close markets to favor a specific player likely changes historical precedent.

Affected traders are already retaining lawyers and working with other traders to pursue the market, bankers, and Tsingshan Holding. With brokers, banks, and even the market itself supposed to have measures designed to prevent these types of blow-ups, the predominantly Chinese banks, brokerage, and market have not exercised the oversight they are generally considered to maintain, exposing them to legal and credibility risk.

At the very least, this will be a major credibility hit to the LME. In a global market where traders can go to numerous major markets, it will be interesting to watch if trading volumes stay in London.

Second, this seems likely to significantly harm interest in working with Chinese counterparties in global financial market structures. Just as a Chinese firm offered to buy the Chicago Stock Exchange before being rebuffed, this is likely to harm any international interest in Chinese involvement in market activity. The Chongqing Casin Enterprise bid for the Chicago exchange fell apart in February 2018 due to security concerns, but questions about Chinese market manipulation were behind the transaction.

Traders can tolerate risk and volatility, but they will not trade where they think the market is rigged. Even a major Chinese shareholder seems unlikely to go forward in the years ahead for fear that pressure from Beijing will shut down markets to protect a Chinese firm. Traders need standard, transparent, and equitably applied trading rules, but China cannot provide that.

As a coalition of banks has stepped in to provide loans to the bankrupt miner, it refused to close its position and increased its short position with the new funds. While trading was briefly resumed on March 16, before being shut down again, the exchange at best appears negligent in allowing such a high-risk participant to continue trading.

Even though global attention is rightfully focused on Ukraine, the events at the LME will likely resonate for a long time to come. While we have expected Beijing to cheat in global trade and intellectual property markets, China made sure foreign bankers made money.

By simply shutting down a foreign trading market to benefit a Chinese participant, LME and HKEX have permanently damaged their reputation.