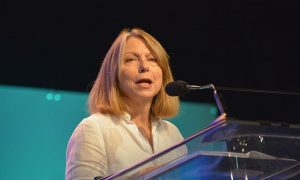 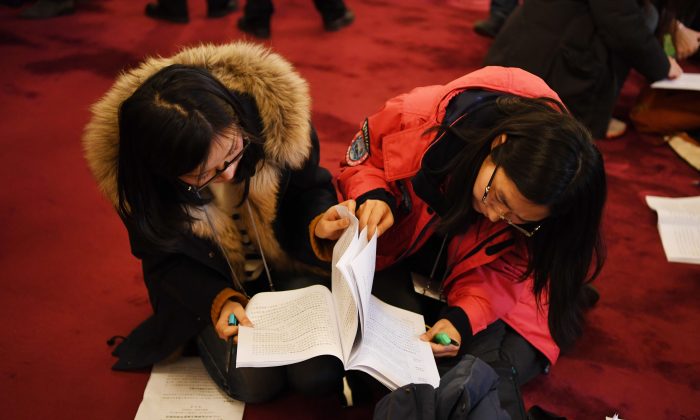 Chinese journalists pore over a copy of the government work report before the opening session of the National People's Congress, the Chinese regime’s rubber-stamp legislature, in Beijing on March 5, 2018. (Greg Baker/AFP/Getty Images)
China Human Rights

China continues to be among the world’s worst abuser of press freedom and jails the largest number of journalists in its prisons, according to Reporters Without Borders (RSF) on April 25. In addition, the press freedom watchdog warned that authoritarian countries across Asia seeking to further consolidate their rule are copying Beijing’s model of media control and censorship.

In its newly released 2018 World Press Freedom Index, Reporters Without Borders evaluated 180 countries in terms of journalistic freedom and the degree to which governments across the world censor their own press. China is ranked 176th, with only Syria, Turkmenistan, Eritrea, and North Korea ranked worse.

“China is the biggest prison in the world for both professional and non-professional journalists,” said Margaux Ewen, North America Executive Director of Reporters Without Borders, during the presentation launching the organization’s 2018 index in Washington D.C.

According to the index, China’s state- and privately owned media are now under the Chinese Communist Party’s tight control. Foreign reporters trying to do reporting in China are encountering more and more difficulties due to the regime’s censorship and suppression.

More than 50 Chinese journalists and bloggers are currently detained in conditions that pose a threat to their lives, the index says, as evidenced by the fact that two imprisoned bloggers died last year due to untreated cancer while in detention.

Ewen also said that a grave concern for press freedom in the Asia-Pacific region is the export of the Chinese regime’s “exploitation of authoritarian model of information.” Cambodia and Vietnam have adopted this model and imposed extensive suppression of the media.

Cambodia, for example, closed more than 30 media outlets in 2017, and Cambodian Prime Minister Hun Sen had been “very outwardly” insulting toward media and media freedom, according to Ewen. Among the Southeast Asian countries, Cambodia is generally seen as having been dragged closest to China’s orbit.

The index also says that under tougher internet regulations by Beijing, Chinese citizens can now be jailed for the comments they make on news items that they post on a social network or messaging service, or even for sharing content the regime doesn’t approve of.

The Reporters Without Borders index echoed another report also published on April 25 by Freedom House in advance of World Press Freedom Day, which says that internet censorship and surveillance reached new heights in China in 2017. Chinese bloggers and social media users continued to be censored and arrested by the Chinese regime for critical online comments or efforts to share information about human rights.

Taiwan, the democratic island nation that Beijing claims as part of its territory, is ranked 42nd in the latest World Press Freedom Index, an improvement of 3 places over 2017 and the highest score for press freedom in Asia. The index says the main threat to media freedom Taiwan faces comes from China, which has been exerting growing economic and political pressure on the Taiwanese media.