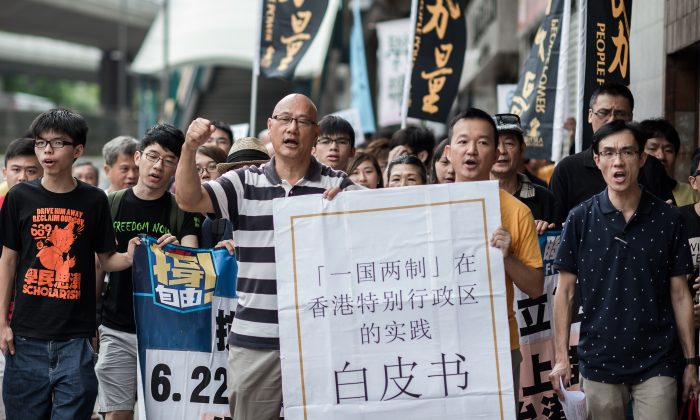 China’s State Council Information Office, also known as the Office for Foreign Propaganda, released an over 23,000-word white paper on Hong Kong Tuesday, setting off the deepest fears of democracy supporters in the region, who now see Beijing as reneging on its promises and tightening its grip.

The white paper represents “a clear change from the past,” said Jiang Shigong, a law professor at Peking University, in an interview with Phoenix, a Hong Kong-based television channel. “It means that central authority will not only be implemented in areas like national defense and foreign affairs, but more importantly will manifest in administrative control over Hong Kong.”

Hong Kong had been promised a high degree of autonomy in the “one country, two systems” model that formed the bedrock of the relationship between the Chinese central government in Beijing and Hong Kong, since Margaret Thatcher and Deng Xiaoping came to an accord over the area in the 1990s. Hong Kong was a British colony before being passed to the People’s Republic of China as a “Special Administrative Region.”

The new white paper now asserts that Hong Kong’s autonomy is dependent on how much autonomy Beijing wants to give it, and that the Chinese regime can change the Basic Law—effectively Hong Kong’s Constitution—any time it likes.

This important shift was placed in the final section of the white paper. The first four parts of it discuss in general terms how Hong Kong “returned to the embrace of the motherland,” and developed in “prosperity and stability” under the leadership of the central government.

But when the paper gets down to business, it does not mince words about the absolute authority the Chinese regime says it has.

“China’s central government has comprehensive jurisdiction over all local administrative regions, including the Hong Kong Special Administrative Region. The high degree of autonomy of HKSAR is not an inherent power, but one that comes solely from authorization by the central leadership,” the white paper said.

“Deng Xiaoping promised that Hong Kong won’t change for 50 years,” said Tsai Yung-mei, executive editor of the Hong Kong-based Open Magazine, which reports on Chinese politics, in an interview with New Tang Dynasty Television. “But after only 10 some years, ‘Hong Kong people ruling Hong Kong,’ and ‘a high degree of autonomy’ don’t exist anymore,” she said, referring to two of the key slogans for Hong Kong’s governance.

“The Communist Party equivocated in the past, but now it makes no bones about it,” she said.

Tsai added, “We Hong Kong people will only have this policy in name in the future. But in fact we will not have a high degree of autonomy.”

The release of the white paper comes just after a massive commemoration in Hong Kong, of close to 200,000 people, marking the 25th anniversary of the June 4 massacre in China.

It also comes a few weeks before protests known as Occupy Central with Love and Peace were planned. There is also an annual march in Hong Kong on July 1.

“I think this is aimed at intimidating Hong Kong people from speaking up in society,” said Tai Yiu-ting, the initiator of the Occupy Central movement, in an interview with local media.

Occupy Central is a pro-democracy movement initiated by Tai Yiu-ting, associate professor of law at the University of Hong Kong, in January 2013. The movement petitions the Hong Kong government and the Chinese communist regime for full implementation of universal suffrage in the 2017 election.

Part of their argument relates to the Basic Law, which says: “The chief executive of the Hong Kong Special Administrative Region shall be selected by election or through consultations held locally and be appointed by the Central People’s Government.”

Protests in Hong Kong have already erupted in response to the white paper, with locals gathering for rallies opposing the regime’s attempt to exert further control over the region.

The white paper did not specifically address the question of suffrage. But the ominous portent in the line “The Hong Kong people who govern Hong Kong should above all be patriotic” was clear enough.