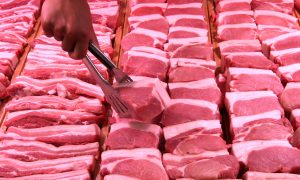 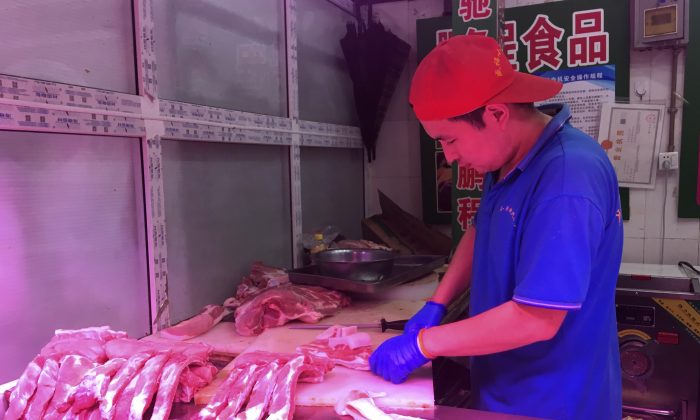 A butcher slices cuts of pork at a meat market in Beijing on Sept. 11, 2019. (Fu Ting/AP)
China Business & Economy

BEIJING—China’s government is releasing pork from stockpiles to help cool surging prices ahead of Oct. 1 celebrations of the Communist Party’s 70th anniversary in power.

The price of pork, China’s staple meat, has soared almost 50 percent from a year ago due to a devastating outbreak of African swine fever that killed or prompted authorities to destroy pigs. That has pushed up global pork prices as importers buy foreign supplies.

A government agency that manages the stockpile of frozen pork said on Sept. 18 it will auction off 10,000 tons.

That is equivalent to less than 0.2 percent of China’s 2018 monthly consumption of 4.7 million tons, which suggests the announcement was a signal to consumers and farmers of Beijing’s determination to cool prices instead of an attempt to change supply levels.

China produces and consumes two-thirds of the world’s pork.

The government keeps reserves of live pigs and frozen pork to guarantee adequate supplies. Details of the frozen pork reserve are secret but industry analysts estimate its size at up to 3 to 5 million metric tons.

Industry analysts say the reserve probably is too small to have an impact on supplies in the market. The last release announced by the government was 9,600 tons in January.

This month, authorities also announced an initiative to revive pork production with support to farmers including subsidies to rebuild pig herds and improve facilities.

The Cabinet planning agency, the National Development and Reform Commission, promised on Wednesday to take “control measures in a timely manner” to keep food prices steady ahead of the Oct. 1 celebrations.

“We will take the lead in formulating plans and measures to ensure a stable supply of pigs,” said an NDRC spokeswoman, Meng Wei.

The price surge is a sour political note for the ruling party, which bases its claim to power in part on improved living standards over three decades of market-style economic reform.

Forecasts of the decline in this year’s Chinese pork production range as high as 35 percent. The U.S. Department of Agriculture says Chinese imports might rise 41 percent.

The shortages have given a boost to American pork exports despite tariff hikes imposed by Beijing in a fight with Washington over trade and technology.

U.S. pork sales to China rose 150 percent in June over a year earlier to 72 million pounds (33 million kilograms), according to the USDA.

Chinese imports rose 26 percent in the first half of 2019 to 819,000 metric tons, according to USDA. The European Union supplied 62 percent, Canada 16 percent and American farmers 8 percent.