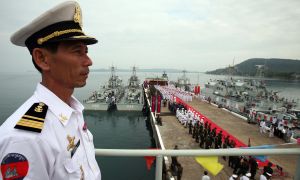 China Signed Pact with Cambodia to Use Naval Base for Its Military: Media Report
0
Share Now
TelegramFacebookTweetEmailTellMeWeReddit
Copy Link 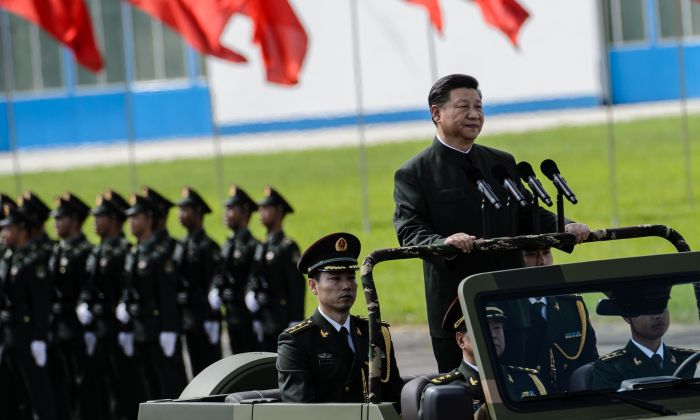 China released a national defense white paper on July 24, in which it criticized the United States for its military prowess and involvement in the Asia-Pacific region.

It also threatened to use force in Taiwan and Hong Kong, drawing widespread criticism.

Since 2000, the Chinese regime has periodically released the white paper, with the previous one released in May 2015. All are released by the State Council, a cabinet-like agency.

The latest white paper described the mission of the Chinese military as “consolidating the leadership of the Chinese Communist Party (CCP) with the socialist system.”

“This means the military is an SS-like army that only serves the CCP rather than the country or the people.” U.S.-based commentator Tang Jingyuan told The Epoch Times on July 24.

The paper also said the Chinese military will work to “fulfill international responsibilities” and “contributes actively to building a ‘community of common destiny,’” a phrase referring to a foreign policy concept developed by former Party leader Hu Jintao.

“This means Beijing is trying to expand its impact on the world with its armed forces,” Tang analyzed.

Most recently, Beijing reportedly signed a secret agreement with Cambodia to use a naval base for its military, according to a Wall Street Journal report. The base strategically faces the Gulf of Thailand.

Major general Shih Shun-Wen, spokesman of Taiwan’s Ministry of National Defense, commented that the white paper demonstrated the Chinese regime’s attempts to downplay its global aggression by emphasizing that the purpose of its military was for its own defense.

The United States was mentioned 12 times in the white paper.

Most of the mentions are devoted to criticizing the United States for its massive military spending, “seeking an absolute superiority in military by technological and systematic innovations,” which is “damaging the world’s strategic stability.”

China reported that its military spending in 2017 was $152 billion, compared to $649 billion by the United States in fiscal year 2018. However, China observers noted that the Chinese regime often do not report budget figures accurately, as they do not account for military research projects by state-owned firms.

The Chinese regime also expressed its displeasure at the United States deploying the Terminal High Altitude Area Defense (THAAD) system in South Korea back in 2017. The U.S. military had deployed the missile system in order to fend off potential attacks from North Korea, which was actively testing ballistic missiles at the time. The paper also criticized the United States’ military cooperation with its Pacific allies, Japan and Australia.

Tang pointed out that the Chinese regime is in fact often the aggressor, which then prompts U.S. action to defend its and its allies’ interests.

“The U.S. and Russia couldn’t maintain medium-range ballistic missiles (MRBM) because of the Intermediate-Range Nuclear Forces Treaty from 1988 to 2019. Meanwhile, the Chinese military used this opportunity to develop and manufacture about 2,000 conventional missiles,” Tang said.

The white paper reiterated Beijing’s typical stance of being opposed to the United States’ arms sales to Taiwan for its self-defense.

Although Taiwan has its own democratically-elected government and a separate judicial system, military, and currency—making it a de-facto sovereign state—Beijing has continually claimed that Taiwan is a province of mainland China, to be united with military force if necessary.

The United States has been Taiwan’s main arms supplier.

The white paper once again emphasized Beijing’s determination to unify Taiwan, while saying that selling arms to Taiwan was equivalent to supporting the island’s formal independence.

“If anyone wants to split Taiwan from China, the Chinese army will resolutely defeat it at all costs to defend our national unity,” the paper said.

The paper doubled down on Beijing’s position on unifying Taiwan.

“We do not promise to renounce the use of force, and reserve the option to take all necessary measures [to unify Taiwan],” the paper said.

“The provocation of Chinese regime not only impacts the cross-strait peace, but also seriously violates the principle of peace in international law and international relations, and challenges the regional security order, causing anxiety in neighboring countries,” the government-run Central News Agency quoted the Taiwanese Mainland Affairs Council as saying. The Council is Taiwan’s chief government agency for mainland China affairs.

Although the white paper did not mention Hong Kong, reporters at a press conference asked Wu Qian, spokesman of China’s Ministry of National Defense, about his views on the recent mass protests against a controversial extradition bill.

“The Pearl of the Orient [Hong Kong] cannot be stained,” Wu said.

Wu added that item 14, act 3 of the Hong Kong Garrison Law described what Chinese military are allowed to do in the territory, which was handed over from British to Chinese rule in 1997. The city was guaranteed a higher degree of autonomy, though recent protests against a bill that would allow criminal suspects to be extradited to China has drawn widespread opposition from Hongkongers, who view it as the latest evidence of Beijing’s encroachment.

The Garrison Law states that: “the Hong Kong garrison can send troops to perform tasks of maintaining society’s public safety…according to commands from [the CCP’s] Central Military Commission.” His comment was widely interpreted as a threat that Chinese military could be deployed to quell future protests in Hong Kong.

“The Trump Administration should strongly and publicly condemn any threats to Hong Kong citizens and U.S. residents of Hong Kong. We also ask the Hong Kong government to condemn the Chinese government’s threats as unwelcome interference in Hong Kong’s affairs,” it said.