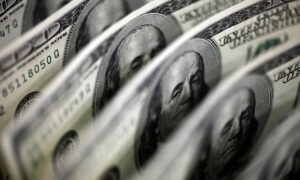 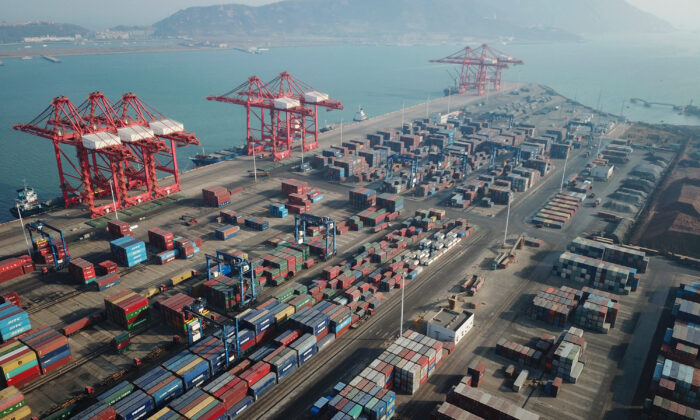 This aerial photo shows shipping containers stacked at a port in Lianyungang, in China's Jiangsu Province, on Jan. 14, 2021. (STR/AFP via Getty Images)
Viewpoints

One of the key pillars of the consensus bullish view about 2021 is the Chinese recovery, supported by optimistic estimates of growth in services and exports.

The details in the official February Purchasing Managers’ Index (PMI) show a different picture. It seems that the data for the Chinese economy, especially in services and exports, is inconsistent with 6 percent GDP growth, as most analysts expect for 2021.

February’s figures were surprisingly weak, especially because the majority of economists already expected a slowdown due to the holidays. The consensus message is that we shouldn’t worry about this, because the PMIs reflect an expected seasonal weakness and the effects of the increase in cases before the Lunar New Year. However, those two factors were already embedded in consensus estimates.

The official manufacturing PMI fell in February from 51.3 to 50.6 in January. A figure above 50 means expansion, and below that, contraction. To see the manufacturing sector, the key driver of the recovery in 2020, close to contraction even in the official figure, is a concern. This is a very large drop, significantly worse than the consensus average forecast of 51.0, at the lower end of economists’ forecasts.

The non-manufacturing PMI, which includes construction and services, dropped to 51.4, below the consensus forecast of 52.0 and the lowest since March 2020 after the economy reopened from the lockdown.

What caused this slump? A drop in construction and a very poor reading of new export orders. The weak manufacturing and construction figures show that the “virtual” celebration of this year’s Lunar New Year holiday had a more negative effect than estimated.

Something is wrong when an export-led economy shows a massive slump in orders in the middle of a global recovery. The new export orders index fell into contraction territory for the first time since September 2020.

Two factors have affected the export orders’ weakness. The relative strength of the yuan, which has reduced orders for the lower added-value products, and the rise in the input and output price PMIs, show that inflationary pressures remain elevated. We could also conclude that the European economy double-dip recession risk has affected orders.

Even if we assume that some of these factors are temporary, one data point should cause alarm. Both the manufacturing and non-manufacturing employment components are in contraction, indicating job losses. An economy that sees a temporary and allegedly irrelevant slump in PMIs shouldn’t reflect employment destruction.

The jobless recovery is an important risk all over the world. We’re seeing a significant bounce in gross domestic product (GDP) in many economies, but the figures of job creation and real wage growth aren’t just disappointing but concerning. Why? Because if jobs and disposable income don’t recover faster, it will be difficult to see the big boom in consumption that so many economists rely on to justify the solid rise in economic growth for 2021.

China’s weakness is much more than a Lunar New Year celebration slump. It’s evidence that the 2020 recovery was more fragile than most commentators suggested.