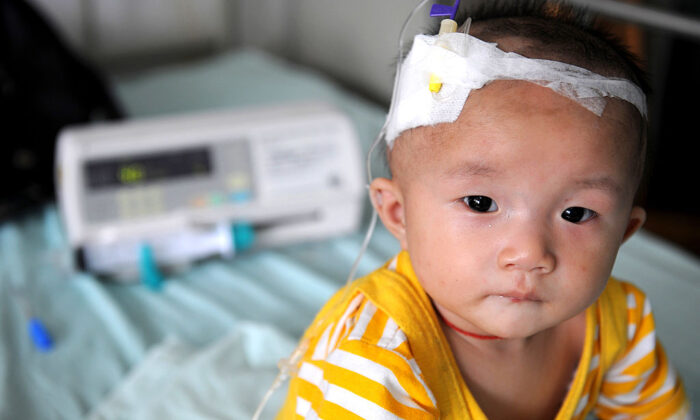 A baby at the Chengdu Children's Hospital in Chengdu in Sichuan Province, China, on Sept. 22, 2008. (China Photos/Getty Images)
China Society

Chinese health authorities have recalled 1,200 bottles of skin cream that are believed to cause growth defects in babies.

The antibacterial skin cream products for infants developed by a company in China’s Fujian Province were suspected of containing hormones that cause swelling, weight gain, stunted growth, and excessive body hair.

The recall came after revelations made by a popular Chinese consumer rights advocate, known for breaking tainted product scandals, in a Jan. 7 video. Wei Wenfeng, in a short video posted on a Chinese social media, shared pictures of an unnamed 5-month-old girl with a swollen face.

According to the video, the girl’s mother applied an antibacterial skin cream called “YiFuLing” onto the baby’s body two months ago, after which she began exhibiting growth abnormalities.

“She didn’t grow in height for two months, and every month, she became fatter, gaining about three jin [roughly four pounds] each month,” the mother, holding the baby on her lap, said in the video that Wei shared.

“Then she began to grow black, thick, and long hair on her forehead. Soon we found that hair was growing all over her body.”

The worried family went to see the doctor. However, upon full examination, they couldn’t find anything wrong. Still concerned, they transferred to Nanjing Children’s Hospital at the end of October 2020.

“As soon as they walked in,” the nurse asked whether they had applied anything on the baby’s body, the father said. The family soon learned that the hospital had received four babies with similar symptoms connected with a hormone-tainted ointment.

Test results on the cream and a similar product from the company showed it contained hormones of up to 31.1 mg/kg, which should have been zero as required by China’s regulator, according to Wei.

Workers from the local market regulation bureau said they are waiting for official testing results, and asked consumers to preserve the “questionable” products, according to Chinese media.

On Jan. 8, the manufacturer, Fujian Ou’ai Infant and Child Healthcare Products, in a statement denied that its products are defective. Rather, they accused the baby’s parents of “creating hype through the short video platform.”

The manufacturer in May 2019 released on its official WeChat social media account test results for its products which found that they contained no hormones or antibiotics, local media reported. The tests were conducted in March 2019 by an official quarantine center in eastern China’s Ningbo City.

Infants have been regular victims of the long line of product safety abuses in China, the most infamous being the tainted milk scandal more than a decade ago. In 2008, then-Chinese milk powder giant Salu Group announced a recall of its milk and infant powder products because they were found to have been contaminated with melamine, a poisonous chemical compound.

The tainted powder sickened at least 300,000 infants and caused at least six deaths.

Sanlu added melamine to inflate the protein content of its milk powder, as the synthetic compound is rich in nitrogen, to pass quality-control testing.

Former Chinese Premier Wen Jiabao said in a 2010 state media interview that at least 30 million children were affected by the tainted milk powder.

Children who consumed the milk product as infants continue to exhibit health problems.

The 5-month-old girl in this case may also continue to experience health problems as she grows, her father said in the video. A doctor advised the family that the tainted cream may cause the girl to have early puberty, and it might take years before the facial hair comes off.