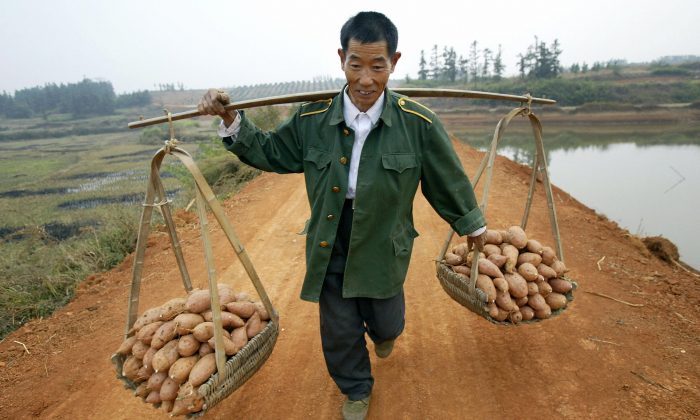 A farmer carries baskets of yams balanced on a pole across his back, on 30 October, 2004. (FREDERIC BROWN/AFP/Getty Images)
Business & Economy

Exports, manufacturing, and investment in China are slowing down. So everyone who still believes the Chinese growth story must believe in the regime’s rebalancing story:

Move from an investment and export model to a consumption-driven economy.

This means China will manufacture and export less, and build less infrastructure and houses. Both of which the world and China arguably have too much of.

Peking University professor and expert on the Chinese economy, Michael Pettis thinks this process will take too long—too long to complete before the Chinese debt bubble blows up.

“Unless it sharply speeds up the process of transferring wealth to the household sector so that consumption can grow much more quickly, China simply does not have ten years in which to manage a non-disruptive adjustment,” he writes in his blog.

According to Pettis, the gap between GDP and household income is most important to rebalance the economy.

According to official data, GDP is growing at 6.9 percent and household disposable income is growing at 7.7 percent. This means consumers (households) are catching up compared to producers (GDP).

Even if this rate, which Pettis thinks is overstated, holds, it would still take 25 years for household income to make up 60 percent of GDP.

“I would argue [this] is the absolute minimum consistent with real rebalancing,” he writes.

But why doesn’t China have even 10 years, as he writes above? Because total debt will grow so much, making a financial crisis all but inevitable.

China could avoid this problem by making debt and investment more productive, but this only works if it completely reforms its financial system. However, this is unlikely to happen without financial crisis either.

“I cannot think of any country in history that has achieved such a turnaround in its financial sector without having first experienced a brutal financial crisis,” Pettis writes.

Another method: The regime starts transferring 2–4 percent of GDP to households every year for a prolonged period of time. This could stabilize debt at sustainable levels and growth could remain relatively high.

However, this would hurt the corrupt economy that the Chinese Communist Party’s power apparatus depends on.

So Michael Pettis leaves the regime with three choices it doesn’t want to make:

“Beijing must ultimately choose between higher debt, higher unemployment, or higher transfers of wealth from the state sector to the household sector.”

Which one is it going to be?