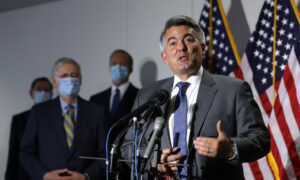 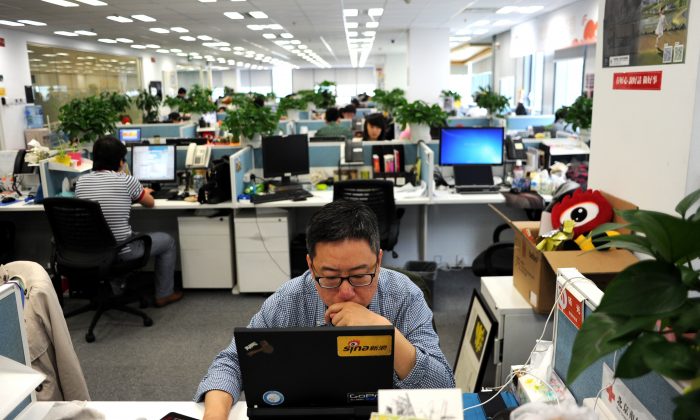 A man using a laptop at an office of Sina Weibo, widely known as China's version of Twitter, in Beijing, on April 16, 2014. (Wang Zhao/AFP/Getty Images)
China Human Rights

U.S.-based human rights organization Freedom House released its annual internet freedom ranking report on Tuesday. For the seventh consecutive year, communist China was listed as the worst Internet freedom abuser among more than 70 countries. Taiwan is included in the list for the first time, ranking among the top five countries with the highest degree of online freedom.

The report called out the Chinese regime’s ongoing digital authoritarianism, and named a few high profile cases in the past year; new legislation that criminalizes expression insulting members of the regime’s military “heroes” and “martyrs”; imposing draconian prison terms for online dissent, including for an 18-year-old; the sentencing of real-estate mogul Ren Zhiqiang, who criticized the ruling Chinese Communist Party (CCP)’s leader Xi Jinping.

The report also mentioned the regime’s censorship of netizens’ discussion of the COVID-19 whistleblower Dr. Li Wenliang since his death in February 2020.

The report said that in 2021, content related to the COVID-19 outbreak is still one of the most censored topics by the regime. Meanwhile, China’s state-run media, official social media accounts, and other government-linked accounts are flooding cyberspace with false claims of the dangers of western vaccines and the source of the CCP virus that caused the COVID-19 pandemic.

In addition, the report pointed out that ordinary internet users in China continue to face legal consequences in daily activities such as sharing news, talking about religion, or communicating with relatives and friends overseas. The regime’s internet regulators have imposed new rules to restrict the posting of current affairs information on social media, leading to the cancellation of many accounts.

The scandals of violating internet users’ personal data and privacy appeared frequently in China, as noted by the report. The Chinese regime put out regulations on tech companies to limit the use of internet users’ information.

One of the authors of the report, Allie Funk, a senior research analyst for technology and democracy affairs at Freedom House, said in an online press conference on Monday that the Chinese authorities had this year introduced a comprehensive law on data privacy that restricts how companies use personal data, but she said the law lacks any safeguards to prevent data privacy abuse by the regime itself.

The report also pointed out that China is the world’s largest surveillance state. “Under its Cybersecurity Law, implemented in 2017, companies must store users’ data on local servers and decrypt the data on request from the authorities,” said the report.

However, the Chinese regime has severely suppressed domestic technology giants, such as Alibaba and Tencent, “for lax data security and monopolistic practices,” while tightening the control over the tech companies, the communist regime has further concentrated power in its hands, the report pointed out.

Adrian Shahbaz, director of Technology and Democracy Affairs at Freedom House, told VOA that the CCP is monitoring large technology companies to transform them into state-owned enterprises. For example, the Chinese government has acquired TikTok’s parent company Bytedance’s equity and board seats. He explained that it’s because it’s easier to control a state-owned entity than a private one, and what the CCP is interested in is its access to users’ data instead of their privacy.

In a contrast, Taiwan is included in the evaluation by Freedom House for the first time, ranking 5th out of 70 countries, and topping the rankings in the Asia-Pacific region.

Funk explained the reason for Taiwan’s high ranking is that the Taiwanese government does not censor the content on the Internet or block any website.