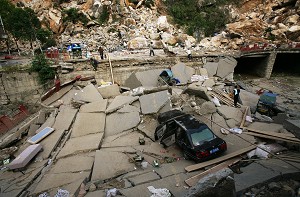 The devastation created by a collapsed road in Beichuan County, one of the hardest-hit areas, of Sichuan province, China. (China Photos/Getty Images)
China

XINSHI, China—Desperate and destitute, the people of the quake-hit village of Xinshi in the mountains of southwest China camp under tatty bivouacs in front of ruined homes, grumbling that their government has forsaken them.

Three days after the 7.9 magnitude quake rocked Sichuan province on Monday, killing at least 15,000 people, China has pushed 130,000 troops and paramilitary police into stricken areas to distribute aid and search for survivors amid countless shattered communities.

The massive relief operation, however, has hardly touched Xinshi, though it lies only 30 minutes down a rutted track from a highway on which military convoys carrying supplies thunder towards more hopeless areas.

“We have no money to survive, we couldn't buy anything anyway. What will we do about our children?” complained Zhang Fuyang, standing outside her makeshift shelter cobbled together from plastic sheeting and a basic wooden frame.

“Nobody has told us anything.”

Xinshi, a small farming community ringed by sheer, mist-covered mountains, is just one of hundreds of villages reduced to ruin in the valleys of northern Sichuan.

Many remain cut off by landslides and broken roads, delaying the arrival of aid and leaving bereft residents feeling abandoned.

“Some soldiers went through here yesterday. We've not seen anybody since,” said Zhang Gongchuang, as his wife slept under a tent and children played cards.

In the same building as Zhang's damaged home was an empty medical clinic. No-one was sure how many people had died.

“We've had no medical staff here since my father died,” Zhang said. “We have no power, and we don't know when we will get it back.”

As the hopes of survival dimmed for an estimated 25,000 people still buried under toppled buildings across the region on Thursday, China's Communist Party leadership has ordered officials to “ensure social stability” amid growing frustration from tens of thousands of homeless survivors.

Lining the highway to Beichuan county, where more than 7,000 have died, desperate villagers were holding up signs made from ripped cardboard at military trucks driving past, saying: “We've nowhere to live. We want to survive.”

Volunteers who pulled over to hand out bottles of water and basic food were mobbed.

Further down the road in Anchang, however, food was being sold on the streets.

State radio has appealed to quake refugees not to drink unsafe water and not to steal relief supplies.

Zhang Gongchuang, surveying the wreckage of his home, had other concerns.

“Even if we have food, how could we prepare it? We have no knives. How can we eat?” he asked.