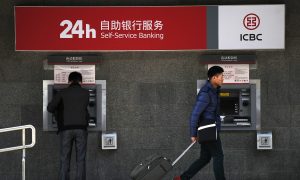 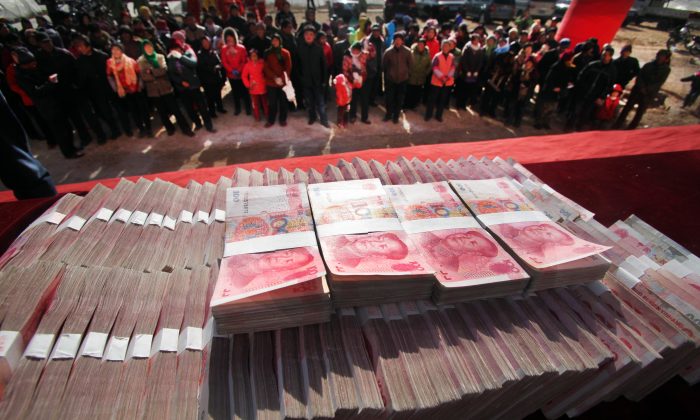 A stash of yuans in Jinan, China, on Jan. 20, 2014. The central regime wants to use money to exert control over local governments. (STR/AFP/Getty Images)
Business

James Nolt knows China intimately well from the time he was the dean of the Nanjing campus of the New York Institute of Technology. During his seven years in China he developed a keen sense of the interplay between economics and politics in the centrally planned economy.

Right now, his sense tells him that the likely form of quantitative easing in China is about more than economics, but rather a struggle of power and control.

James Nolt: There is a struggle here between the local and central government. Local governments have relied on the real estate bubble for finance. They got revenue from development of real estate.

In China, they have a transaction tax on real estate, not a property tax. They rely on transactions happening to get money. So since the slowdown, they have been crunched for cash. But they want to keep development going and have racked up massive debts.

Epoch Times: What kind of development are the local governments doing?

Mr. Nolt: They do part of the projects, usually together with private developers. They may finance the sewers and the electricity; clearing the land and compensating existing dwellers.

Epoch Times: Why is this a problem for the central government?

Mr. Nolt: It’s been out of control from the central government standpoint. It has been trying to reign in the credit bubble that has occurred. There is overbuilding because it’s in the local governments’ interest to keep developing because of the transaction tax.

They can benefit their local cronies by propping up prices and giving contracts to them too. Because the projects are all local and the financing is by local branches, it gives them too much autonomy. Local branches of national banks are more under local party influence than central government influence.

Are the local officials aligned with the leadership and are the following the rules of Beijing?
— James Nolt

They cultivate their friendships and their networks with the people they worked with for decades. The central government wants to get a handle on the expansion of credit. QE gives it a lever to selectively reward or approve of policies of specific local governments. As more of this credit is being bought by the central government [within the QE program], that gives them a lot more leverage. That’s one of the things at stake now.

Epoch Times: What will be the consequences?

Mr. Nolt: There might a tendency to further ease credit and therefore further pump up the asset bubble. It could revive the property market if enough new credit is created. I don’t think it’s as bullish as it might sound.

Epoch Times: Who gains and who loses?

Mr. Nolt: It’s not about changing the amount of debt but rather than getting control over issuance. Are the local officials aligned with the leadership and are the following the rules of Beijing? In some localities credit will expand, in some it will contract. Some people will use credit to finance stock speculation.

The central government doesn’t control the details of implementations, that’s up to local officials and bankers. The funds can end up in the hands of bankers, developers. They can do all kinds of things.

James Nolt is a senior fellow at the World Policy Institute and author of International Political Economy. Previously, Mr. Nolt was the dean of the New York Institute of Technology’s Nanjing campus.