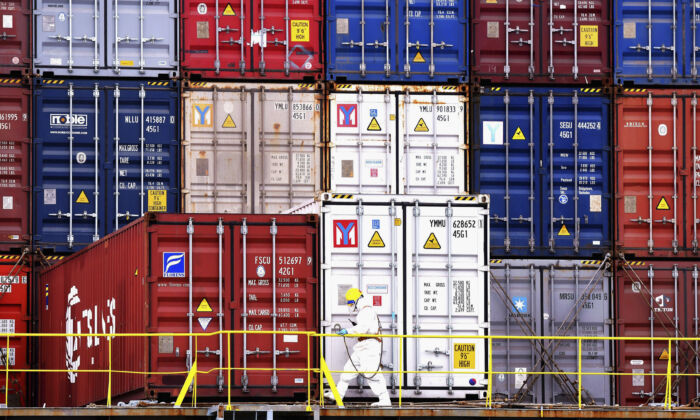 A worker in protective overalls works near containers on a ship in Qingdao city in east China's Shandong Province on Nov. 7, 2021. (Chinatopix via AP)
China Business & Economy

China’s economy saw the weakest expansion in a year and a half during the fourth quarter, official data show.

Gross domestic product (GDP) grew 4 percent in the final quarter of 2021 from a year earlier, China’s National Bureau of Statistics (NBS) announced on Jan. 17. That’s less than the 4.9 percent gain in the third quarter and a further deceleration from the 7.9 percent growth in the second quarter and 18.3 percent expansion in the first quarter.

China reported a strong economy at the start of 2021 as activity recovered from the previous year’s pandemic-induced slump. However, the trend eased as the country suffered a few setbacks, including an energy crunch, regulator curbs, declining property market, and sporadic COVID-19 outbreaks.

GDP grew 8.1 percent throughout 2021, a better result than the above-6-percent growth target China set earlier last year. The revised growth of 2020 was 2.2 percent.

On a quarter-on-quarter basis, GDP rose 1.6 percent from October to December.

John Mac Ghlionn, a researcher, essayist, and Epoch Times contributor, questioned China’s GDP data in his analysis for the newspaper in October last year, calling it “a very poor tool” for measuring the country’s health.

“China’s growth appears to be built on a faulty foundation,” he said, noting an excess supply of housing units that boosted the country’s economy under the shadow of developers’ unsustainable debt problems.

He cited Michael Pettis, an expert on China’s economy, noting that “China’s official debt-to-GDP ratio has soared by nearly 45 percentage points” over the past five years. Compared to other developing countries, this happens to be one of the highest debt ratios in the world.

The world’s most debt-saddled developer, Evergrande, saw its 2021 sales fall by nearly 40 percent, and the crisis is still growing. The Chinese company faces huge debt maturities in 2022, including a total of $3.5 billion in bonds due in March and April. Earlier this month, Evergrande withdrew its lease and moved out of its Shenzhen headquarters.

Chinese regulators have been trying to steer the economy in the face of headwinds.

China’s central bank on Jan. 17 cut the borrowing costs of its medium-term loans for the first time since April 2020, leading some analysts to expect more policy easing this year to cushion an economic slowdown.

The People’s Bank of China said it was lowering the interest rate on 700 billion yuan ($110.2 billion) of one-year medium-term lending facility loans to some financial institutions by 10 basis points to 2.85 percent from 2.95 percent in previous operations.

It also announced in December that it was reducing the amount of cash that banks must hold in reserve for the second time last year, unlocking $188 billion in long-term liquidity to shore up slowing economic growth.

A bright spot was industrial output, up an annual 4.3 percent in December, accelerating from a 3.8 percent increase in November, the NBS said in a separate statement.