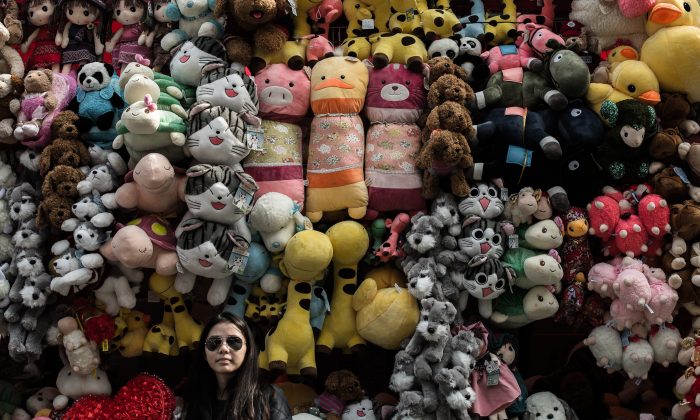 A woman stands in front of a toy display in Hong Kong, Feb. 13, 2015. Chinese companies have been churning out too much merchandise, leading to falling prices—and a worried central bank. (PHILIPPE LOPEZ/AFP/Getty Images)
Business & Economy

Another week, another effort by the Chinese authorities to boost the economy. This time the People’s Bank of China (PBOC) lowered its benchmark interest rate by 0.25 percent to 5.10 percent.

This is different from the cut in the Required Reserve Ratio (RRR) from a few weeks ago, but it’s for the same reason.

What Is the RRR and Why Does It Make Chinese Stocks Go Up?

The economy is slowing, banks aren’t lending to companies and local governments, and prices are dropping. The PBOC fears this phenomenon called deflation and is trying what it can to counteract it.

Because of extreme excess capacity, producer prices have been falling for several years now, dropping 4.6 percent in April compared to April, 2014. This means producers of good received almost 5 percent less on average for the products they sold compared to a year ago.

However, the rate they pay on the debt they borrowed to invest in the equipment to make the products stays the same. So companies need to pay the same, but make less; no wonder we have seen the first defaults of Chinese companies this year.

Adjusted for the falling prices, the real interest rate for firms in China is around 10 percent! To add insult to injury, consumer prices have also been stalling, up 1.5 percent in March over the year.

Since the PBOC can’t do anything to counter falling prices and make people pay more for produced goods, it can only lower the lending rate to lessen the burden for manufacturers.

However, despite the good intentions, the effort will likely be in vain. Because of excess capacity, economically feasible projects are few and far between and companies won’t borrow no matter how low the rate to invest in even more productive capacity.

So as usual, the money will end up in the stock market again, which dropped 5.3 percent last week before the announcement. Today, after a little boost, it was up 3 percent again.