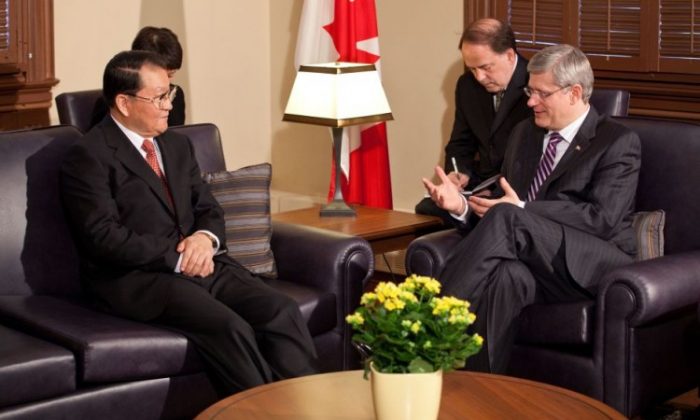 OTTAWA—Normally when the prime minister of Canada receives a high-ranking foreign official, the visit follows a predictable protocol. There are press releases, advanced agendas, and photo ops.

When Li Changchun, the fifth-ranked member of the Chinese regime’s ruling Standing Committee, came to Ottawa last week, there was none of that. Instead, the entire visit was kept under wraps. Details of the meeting emerged only via Chinese press likely in Li’s entourage.

Even after the visit, few details were released by the Prime Minister’s Office save for a photo of Stephen Harper and his guest facing each other in armchairs.

Li is the head of the Chinese regime’s notorious propaganda and censorship system.

The Canadian prime minister appears to be getting some bad advice.

Those were former member of Parliament David Kilgour’s first words when he heard Stephen Harper had met with another senior Chinese cadre who is among the most notorious rights abusers in China today.

“I am very sad to hear that. It simply has got to stop or Canada is going to be a laughing stock among the people that believe in human dignity and rule of law,” said Kilgour, a former secretary of state for Asia-Pacific.

Kilgour said the fact that Li was making the rounds in Ottawa while trying to keep his presence unknown to the Western press should have tipped off Harper’s staff that Li had something to hide.

Meetings With Top-Level Targets for Ousting

Li comes to Canada amid factional infighting in the highest ranks of the Chinese Communist Party (CCP), which is claiming some of Li’s most powerful allies.

Li has long been counted among the core members of the faction loyal to former chairman Jiang Zemin, as opposed to the faction headed by current leader Hu Jintao and his premier, Wen Jianbao.

Several top members of Jiang’s faction are now targets for ousting. It’s a messy process that has caught the attention of the international press as former Chongqing Party Secretary Bo Xilai, another Jiang ally, comes under investigation.

Harper met with Bo on Feb. 11, just weeks before Bo was purged from his position, a move The Epoch Times predicted before Harper’s meeting. Once considered a rising star, Bo is now under investigation for “serious discipline violations.”

“[Harper] should never have gone to see Bo in Chongqing, that was colossally bad advice. It was abundantly clear to everybody that follows China closely that Bo was on his way out,” said Kilgour.

Kilgour also noted Bo’s leading role in the organ harvesting crimes against Falun Gong practitioners, arguing he is not someone Canada should have been looking to build ties with.

“Our PM is supposed to get better advice than that. He’s got a lot of stuff to keep track of and he’s not supposed to be an expert on all these nuances that are happening in China at breakneck speed,” said the former parliamentarian.