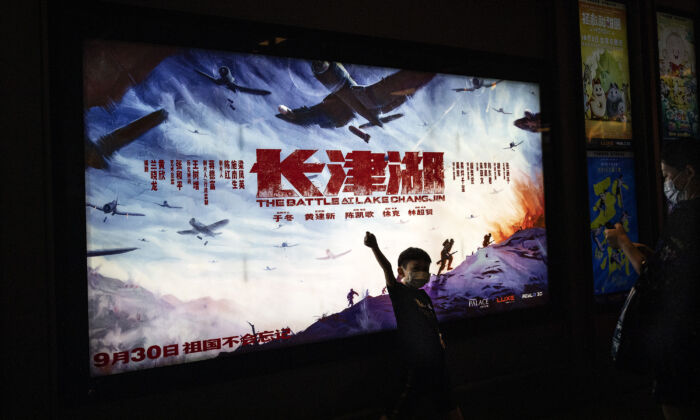 A boy poses in front of the movie poster of “The Battle At Lake Changjin" in a cinema in Wuhan, Hubei Province, China, on Oct. 2, 2021. (Getty Images)
Social Control

The Chinese Communist Party (CCP) promoted a film during the past national holiday break with anti-U.S. sentiment and praise for its one-party rule.

The CCP marked the anniversary of the start of its rule in China on Oct. 1, with the holiday lasting until Oct. 7. The seven-day holiday, known as Golden Week, saw tightened control over film releases and the implementation of an unofficial ban on foreign productions, including Hollywood blockbusters, as the Party works to keep control over the public sentiment needed to protect its rule.

Under the title “The Battle at Lake Changjin,” the three-hour war film praised the victory of Chinese troops battling U.S.-led U.N. forces during the Korean War (1950–1953), better known in the United States as the Battle of Chosin Reservoir.

The multinational troop battled an armed attack by North Korean forces against the Republic of Korea—deemed “a breach of peace,” according to U.N. Security Council Resolution 84.

In the winter of 1950, then-Chinese communist leader Mao Zedong sent millions of soldiers to fight alongside the North Korean military, against U.S., British, and South Korean troops.

The North Korean troops were eventually pushed back to the 38th parallel, which has divided North and South Korea since 1945. The war unofficially ended three years later in a cease-fire, without a signed peace treaty. Pyongyang has rejected South Korea’s call to declare a formal end to the Korean War.

Despite the failure of North Korea to take over the entire Korean peninsula by military force, China has boasted about the national struggle as a successful “war to resist U.S. aggression and aid Korea,” as experts estimate that the warfare cost as many as 1 million lives.

“The motherland will not forget,” a cinema slogan of the film reads.

Luo Changping, a former Chinese journalist, said on social media on Oct. 6 that Chinese people “rarely reflect on the justice” of the war. He then used a pun to suggest that the soldiers were foolish, according to screenshots of a social media post that can no longer be accessed.

Due to the comments, police detained Luo two days later on suspicion of insulting the “heroes and martyrs” of the Korean War, state media reported.

Another film with patriotic themes approved for release during the holiday, “My Country, My Parents,” was co-directed by several Chinese celebrities, including Zhang Ziyi, the actress who once criticized Dolce & Gabbana in 2018 for “disgracing itself” amid accusations that it had defamed China.

Yet, Chinese netizens saw it as a mocking of Chinese culture, which soon sparked an outcry nationwide, including calls for a boycott and the cancelation of one of its biggest shows in Shanghai.

Alex Wu and The Associated Press contributed to this report.