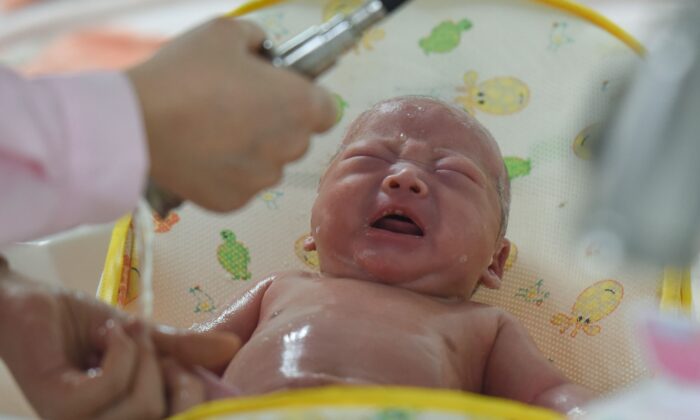 A medical staff taking care of a new born baby at a hospital in Fuyang in China's eastern Anhui province on Jan. 19, 2019. China's population shrank last year for the first time in 70 years, experts said, warning of a 'demographic crisis' that puts pressure on the country's slowing economy. (STR/AFP via Getty Images)
Social Issues

After the Chinese Communist Party (CCP) introduced the “three-child policy” in May, local governments started various incentives to encourage people to have more children, including the use of in vitro fertilization (IVF). Analysts believe that the CCP would go as far as using technological means to increase China’s birthrate in an aging population.

On Sept. 14,  Chinese state-controlled media CCTV said that, in recent years, more families are choosing assisted reproductive technology with infertility on the rise.

In the CCTV program, some experts recommended IVF as the most common method among the various  techniques, commonly referred to as test-tube babies. According to the report, about 300,000 test-tube babies are born in China every year.

However, assisted reproduction is costly. Including examination and treatment, an IVF procedure costs between $5,873 and $7,728, and more than half of the couples require the procedure more than once before it succeeds.

Meanwhile, China has limited medical institutions that offer assisted reproduction procedures, most of which are in its first-tier or second-tier cities. Patients in certain regions would need to travel to other provinces for each treatment, incurring considerable expenses.

Jinxin Fertility, a Chinese assisted reproductive medical company, said in its 2019 prospectus that the prevalence of infertility in China is expected to rise from 16 percent in 2018 to 18.2 percent in 2023. According to its estimation, China’s infertility rate has long been higher than the global average, and it is projected to be even higher in the future.

“Childbirth is one of the most important natural processes of human life. What caused such a big change in 30 years?” Dr. Cui Hong said to the Epoch Times reporter. Dr. Cui is a former Chinese obstetrician and gynecologist who has practiced medicine for nearly 30 years.

“There are many reasons [for the rising infertility rate]: increased pollution of the living environment, chemicals in food, fast paced work and life, increased stress and so on, coupled with people marrying late and giving birth later in the modern age, missing their best childbearing age. In addition, various modern diseases cause the quality of sperm or eggs to decline,” Dr. Cui said.

She said that the rate of congenital infertility is extremely low, so it is primarily due to acquired causes. If a person’s body has undergone surgery and is substantially damaged, it may also lead to infertility.

“In the past, people focused more on self-cultivation and vitality. At that time, the fertility rate was very high. Whereas, in the modern age, people are more prone to nervousness and anxiety,” Dr. Cui said while emphasizing that the human mind plays a critical role in fertility.

Dr. Cui said that as a doctor, she is not opposed to IVF, “If you are still infertile after common fertility treatments, you can try assisted reproduction procedures, but the success rate is at most half.” She suggests that the majority of unsuccessful IVF cases are related to the mother’s health. During IVF, an egg is removed from the woman’s ovaries and fertilized with sperm in a laboratory. The fertilized egg, called an embryo, is then returned to the woman’s womb to grow and develop. However, some women have weaker bodies, and are unable to bear the process.

Although most parents want their own children, sometimes, if one of the couples cannot provide qualified sperm or ova and still want to use IVF, they can have the hospital provide donor sperm or the egg. In this case, the child born will have no blood relations with one of the parents, adding complexity to their relationship.

“At this time, the CCP is propagating test-tube babies and is eager to increase the fertility rate through technical means to curb the trend of population decline. However, distant water won’t quench [their] immediate thirst; the technology may not be mature enough,” Zhuge Mingyang, an independent journalist, told The Epoch Times.

The ethical and moral controversies of test-tube babies have existed since its inception.