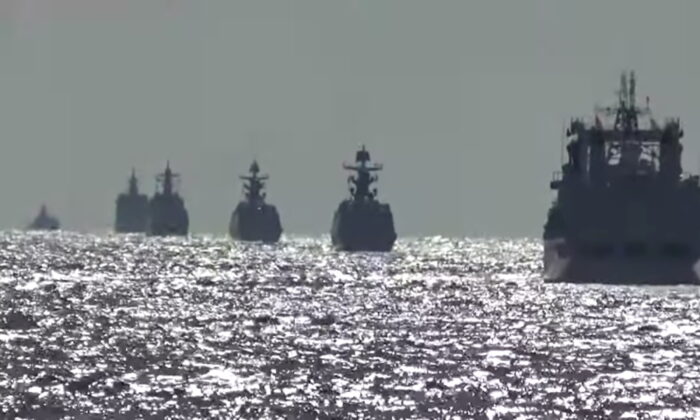 A group of naval vessels from Russia and China conduct a joint maritime military patrol in the waters of the Pacific Ocean, in this still image taken from video released on Oct. 23, 2021. (Russian Defence Ministry/Handout via Reuters)
Thinking About China

The Chinese regime has escalated its effort to achieve military and political dominance in the Pacific by demonstrating its potential to deploy dominant force to the South Pacific, intimidate Australia and New Zealand, exploit its position in Antarctica to better control low Earth orbit, and support new hypersonic weapons.

After years of the regime’s outright economic and political bullying of U.S. ally Australia, expanding its penetration of some of the weaker island states like Tonga, Fiji, and Vanuatu, and using its economic power to build influence in New Zealand, there was a reaction. On Sept. 15, 2021, Australia, the United Kingdom, and the United States signed the AUKUS defense arrangement to equip Australia with nuclear-powered attack submarines.

On one level, AUKUS was a political master stroke, at once highlighting and threatening Chinese Communist Party (CCP) ambitions for Asian hegemony. On another level, it can be seen as a rather lagging deterrent because the Royal Australian Navy may not get its nuclear submarines for a decade or more.

The problem is that China’s People’s Liberation Army (PLA) is already a major threat in the South Pacific, with the current capability to conduct punitive invasions, blockades, or to even invade and conquer New Zealand. These capabilities will increase rapidly over the coming decade.

China is right now exposing the lagging deterrent aspect of AUKUS by exploiting the Jan. 15 massive underwater volcanic explosion that damaged the island nation of Tonga. China is using a humanitarian supply mission to preview the PLA’s current and future invasion capabilities.

But on Jan. 27, the PLA Air Force (PLAAF) dispatched two of its Xian Aircraft Corporation Y-20 heavy transports, delivering 33 tons of supplies to Tonga. The Y-20 can transport about 100 troops or up to 50 tons of armored vehicles and weapons. In 2014, a PLA National Defense University report suggested the PLA acquire 400 Y-20 transports—so far, Xian has produced over 40.

The new Y-20B, powered by new indigenous WS-20 high-bypass turbofan engines, may have a cargo capacity of over 60 tons.

For the Jan. 27 mission, the PLAAF Y-20s had to make multiple refueling stops. But in the future, Y-20 tanker aircraft will enable near full-load non-stop missions to the South Pacific.

But that’s not all. Now sailing to Tonga is one of the PLA Navy’s (PLAN) 25,000-ton Type 071 landing platform dock (LPD) amphibious assault ships that will deliver about 1,400 tons of supplies.

The PLAN now has eight Type 071 LPDs, and three of an estimated six to eight 40,000-ton Type 075 landing helicopter dock (LHD) amphibious assault ships. With an overload, the Type 071 and the Type 075 can each carry about 1,000 troops and scores of light- or medium-weight armored vehicles.

Should the CCP decide to invade New Zealand, its 11 LPDs and LHDs could transport 10,000 troops and hundreds of light- and medium-weight armored vehicles, or enough for two medium-weight PLA Ground Force or PLA Marine brigades.

With its two, soon to be three, aircraft carriers, the PLAN could send about 75 combat aircraft to attack all targets of consequence in New Zealand. The PLA could then deploy a brigade each on New Zealand’s North Island and South Island.

Thanks to decades of “woke” governments, New Zealand lacks the military forces to offer much resistance. The Royal New Zealand Army could mobilize about 4,600 troops, but only has 25 lightly-armed infantry fighting vehicles.

In an earlier role as Member of Parliament, Clark was instrumental in causing the United States in 1986 to end its alliance obligations to New Zealand under the 1951 Australia-New Zealand-United States (ANZUS) alliance.

The then-Labour government of Prime Minister David Lange had been manipulated by labor unions beholden to the Soviet Union into adopting anti-nuclear weapons policies, which had the effect of barring U.S. Navy ships from its ports, thus forcing President Ronald Reagan to end U.S. alliance obligations to New Zealand.

While New Zealand does maintain close military relations with Australia, and nearly 40 years post-ANZUS also has cordial relations with Washington, both Australia and the United States would be hard-pressed to devote sufficient naval and air forces to defend New Zealand from a large PLA invasion force.

And why bother? The day that AUKUS and the plan to help Australia acquire nuclear-powered submarines was announced, current New Zealand Labour Prime Minister Jacinda Ardern publicly forbade Australian nuclear submarines from entering New Zealand waters, as that would violate its anti-nuclear laws.

This is a victory for China. New Zealand’s insane anti-nuclear laws, spurning of allies, refusal to build a credible defense capability, and increasing reliance on commerce with China mean that Wellington can be pressured to ignore Beijing’s predations, especially any placement of military capabilities in Antarctica, an express violation of treaties governing that continent.

China already has laser systems at some of its Antarctic bases, allegedly to conduct “atmospheric research,” but these could be stealthily upgraded to perform anti-satellite interception missions.

Securing south polar routes over Antarctica would be valuable to the PLA as attack routes for its new Fractional Orbital Bombardment System (FOBS) armed with hypersonic glide vehicle (HGV) weapons.

Despite some gormless rulers, New Zealanders do not deserve abandonment to Chinese communist predations. The larger democracies are justified in expecting that New Zealand should do its part to defend against Chinese advances and invasion. This includes helping to prevent Antarctica from becoming a free-passage zone for Chinese FOBS/HGV weapons—some of which might well violate New Zealand’s precious nuclear sensibilities.

For all these reasons, AUKUS must quickly be given real teeth. One option is to offer Australia a lease of U.S. B-1B bombers and B-21 stealth bombers, which could be stationed to deter Chinese invasion forces for many years before delivery of the first AUKUS nuclear submarines.

In addition, New Zealand should be offered low-cost used F-15E strike fighters and the sale of about 100 potentially 1,100-mile range AGM-158D JASSM-XR anti-ship missiles to help ensure the PLA keeps its distance.