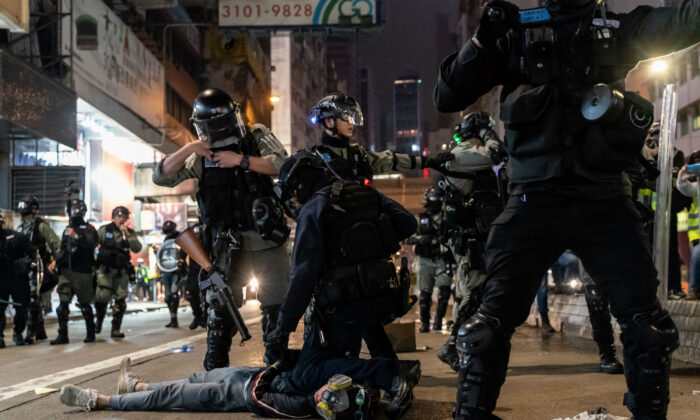 Riot police detain a protesters during a rally in Causeway Bay district on New Years Day on Jan. 1, 2020 in Hong Kong, China. (Anthony Kwan/Getty Images)
By Cathy He

The Chinese regime’s intensifying efforts to thwart global scrutiny of its human rights abuses pose an “existential threat” to the international system, a rights group said on Jan. 14.

Human Rights Watch (HRW), a U.S.-based nonprofit, in an annual report documenting human rights conditions around the world, said the Chinese regime is carrying out the “most pervasive and brutal oppression in decades.” Meanwhile, outside its borders, Beijing is using its economic clout to silence its critics and extend its censorship to the rest of the world.

“No other government flexes its political muscles with such vigor and determination to undermine the international human rights standards and institutions that could hold it to account,” Kenneth Roth, HRW’s executive director, wrote in the report, released on Jan. 14.

Roth experienced this firsthand when he was denied entry to Hong Kong on Jan. 12, where he was due to hold a press conference about the report. The city has been roiled by ongoing pro-democracy protests against the Chinese regime’s increasing encroachment into the city’s freedoms and autonomy.

“I had hoped to spotlight Beijing’s deepening assault on international efforts to uphold human rights,” Roth said in a statement on Jan. 12. “The refusal to let me enter Hong Kong vividly illustrates the problem.”

Hong Kong’s leader Carrie Lam on Jan. 14 declined to comment on Roth’s case. Earlier, however, China’s foreign ministry spokesperson indicated that the Chinese regime had been involved in the decision to bar entry.

“It is China’s sovereign right to decide who shall be granted entry and who shall be denied it,” Geng Shuang said at a regular briefing on Jan. 13.

Geng also suggested the refusal was linked to the nonprofit’s advocacy regarding the Hong Kong protests. He accused the group of “inciting violence” and “separatist activities” in the city.

Roth, at a Jan. 14 press conference at the United Nations in New York City, dismissed the explanation as “preposterous,” saying that it’s “frankly ludicrous [to suggest] that my colleagues and I have the capacity to mobilize a million people or more on the streets repeatedly over the last six months.”

The Chinese regime has consistently framed the demonstrations as the work of foreign forces inciting protesters from behind the scenes.

“The Chinese government is terrified of admitting this genuine desire for democracy on territory that they rule,” Roth said. “Because if they admit that this is an indigenous, natural, and spontaneous desire, rather than what they claim is a foreign imposition … then what’s happening in Hong Kong might spread to the mainland—and that’s really the big fear.”

In December, Beijing announced sanctions on HRW and other U.S.-based nonprofits in retaliation to the United States enacting the Hong Kong Human Rights and Democracy Act, which supports the city’s protest movement and threatens to impose sanctions on Chinese and Hong Kong officials involved in rights abuses in the city.

In a section on Hong Kong, the HRW report said Hong Kong police used “excessive force” to disperse protesters, including by “beating those subdued on the ground.” It added that police have “increasingly restricted freedom of assembly” in the city.

In the mainland, the regime has continued to repress religious and ethnic minorities, independent journalists, judges, and activists, the report said.

The communist regime, the report noted, has undermined international institutions designed to protect human rights, such as the United Nations, where it uses its veto power to block measures that support persecuted groups worldwide. It has also worked to block international groups from independently examining human rights conditions in the country.

The report also said Beijing uses access to the Chinese market as leverage to threaten companies for criticizing the regime. For example, a comment on Twitter by the general manager of the Houston Rockets in support of Hong Kong protesters last October prompted all Chinese sponsors of the National Basketball Association to pull their partnerships in China.