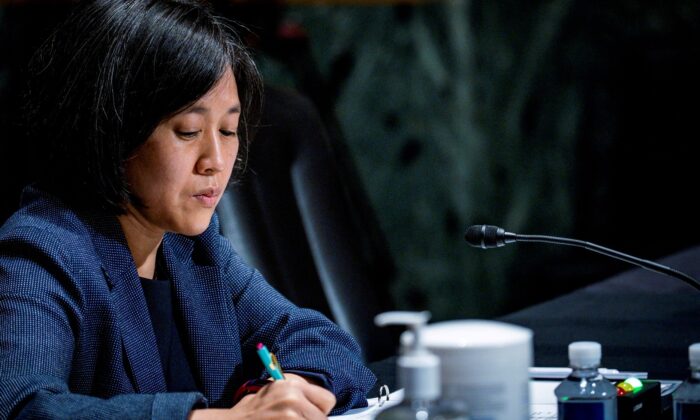 China Presses US to Cancel Tariffs in Virtual Meeting

During the virtual talk, the Chinese side “negotiated over the cancellation of tariffs and sanctions, and clarified position on China’s economic development model and industrial policies,” a readout from China’s state agency Xinhua said. It described the exchange as “pragmatic, candid, and constructive.”

The talk on Friday, the second between the two, came days after Tai outlined her strategy to follow through on the Trump-era phase one trade deal, which committed China to buy $200 billion worth of U.S. goods over the period between 2020 and 2021.

The U.S. account of the meeting said the two sides “reviewed implementation of the U.S.-China Economic and Trade Agreement and agreed that the two sides would consult on certain outstanding issues.”

Tai “emphasized U.S. concerns relating to China’s state-led, non-market policies and practices that harm American workers, farmers, and businesses,” according to a statement from the United States Trade Representative (USTR).

The U.S. trade ambassador “looks forward to following up with Vice Premier Liu in the near future,” the statement added.

In a briefing ahead of the call, a senior USTR official said Tai considers the call “a test of whether or not this type of engagement will help to secure the outcomes that we’re looking for, and we’re going in with the hopes that China will respond positively.”

Future engagement with China will depend upon “how China responds,” the official said, declining to elaborate on possible next steps. The official added that Tai will not seek Phase 2 trade negotiations with Beijing over state subsidies and other structural issues.

“We recognize that Beijing is increasingly explicit that it is doubling down on its authoritarian state-centric approach and is resistant to addressing our structural concerns,” the official said. “Therefore our primary focus will continue to be on building resilience and competitiveness, diversifying markets, and limiting the impact of Beijing’s harmful practices.”

Tai, whose office has completed a six-month review of the U.S. trade policy on China, said on Monday she will begin a “targeted tariff exclusion process” to allow U.S. companies to apply for a tariff break on products they import from China.

The USTR granted 2,2000 exclusions between 2019 and 2020, the department website shows. Most of these exclusions expired last December.