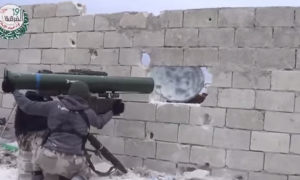 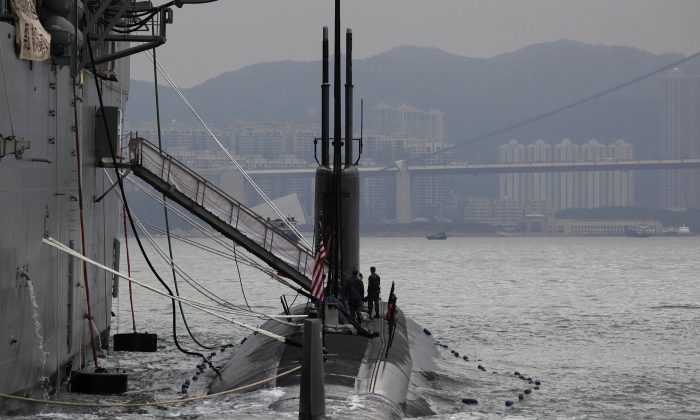 China has a glaring hole in its military strategy against the United States. Military analysts have pointed out that while China is investing in ballistic and cruise missiles to keep foreign ships away, it has little to counter U.S. submarines which would play a pivotal role in a conflict with China.

The Chinese regime seems to have become privy to this gap. It has been building and deploying systems designed to detect and attack U.S. submarines. Recent photos show China has also begun fitting warships with sonar systems designed for anti-submarine warfare.

Two types of ships in China’s People’s Liberation Army Navy (PLAN) are being fitted with what appear to be variable depth sonars (VDSs). Images of the additional systems were posted on cjdby.net (which appears to be offline at the time of writing), and were picked up by IHS Janes, a leading security intelligence company.

The two ship models are China’s Type 054A frigates and the Type 056 corvettes. The photos were taken at Huangpu shipyard in Guangzhou province, China.

Both models of the Chinese ships are already equipped with bow-mounted sonars. The new sonar systems are tow arrays. An analysis from IHS Janes says the location of the new sonar systems, “suggest that some platforms will be primarily anti-submarine warfare.”

The Chinese regime has been trying to build an arsental of weapons and systems capable of detecting and destroying submarines.

A recent report from the U.S. Naval War College says China’s navy has “limitations or weaknesses in several areas,” which include anti-air warfare and anti-submarine warfare. It notes, however, that China is trying to change this.

Currently, mine warfare is the Chinese navy’s key strategy for countering submarines. The report states that China’s mine warfare school is in Dalian, near one of China’s major surface warfare schools for military officers. It states that close to 55 PLAN submarines can sow mines, and that China has been “increasingly emphasizing training for aircrews in mining tactics, techniques, and procedures.”

The U.S. Naval Institute found in April that China is also deploying a network of sensors on the ocean floor to “strengthen its antisubmarine-warfare capability.”

The network of sensors is similar to the U.S. Sound Surveillance System (SOSUS), which the U.S. Navy started in 1949 for anti-submarine warfare. SOSUS listening posts are deployed in the Atlantic Ocean and Pacific Ocean, typically at geographic chokepoints that submarines will likely pass through. The system was used to keep track of Soviet submarines during the Cold War.

The Naval Institute states that analysts inside and outside China “have rightly pointed to the [PLAN’s] quite obvious weaknesses in antisubmarine warfare (ASW) as a persistent Achilles’ heel of the evolving force.” It notes that despite China’s focus on fighting submarines, it still has a “long road ahead…”

According to The Diplomat, however, if the Chinese regime were to perfect such technology, “it could largely negate the military capabilities of America’s submarine forces…”

“If China were able to field such a network–which according to the piece is setting up undersea-sensor test sites in the Yellow, East and South China Seas–then American subs could be pushed back beyond the range of such networks,” it states.

The goal of the Chinese regime appears to be just that—to push the United States far from China’s shores. The U.S. military refers to China’s approach as an anti-access/area-denial (A2/AD) strategy.

The strategy is meant to “deter U.S. intervention in a conflict in China’s near-seas region over Taiwan or some other issue, or failing that, delay the arrival or reduce the effectiveness of intervening U.S. forces,” according to an August report from the Congressional Research Service on China’s naval modernization.

The Soviets had used a similar strategy during the Cold War. According to the report, the Soviets used the strategy to block the United States from intervening in a NATO-Warsaw Pact conflict.

The Chinese regime has a few weapons the Soviets did not, particularly anti-ship ballistic missiles. Yet, it still lags behind the the area of submarine and anti-submarine warfare.