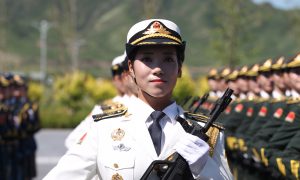 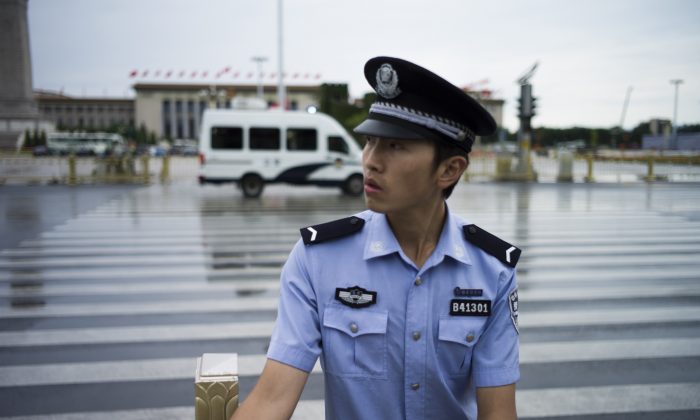 A Chinese policeman checks an entrance to Tiananmen Square in Beijing on September 1, 2015, prior to a military parade to be held on September 3 to mark the victory over Japan and the end of World War II. (Fred Dufour/AFP/Getty Images)
China

Police in the southwestern Chinese city of Chongqing have detained a retiree for his politically undesirable public talks, as the regime prepares to hold a massive celebration of China’s victory over Japan in the second world war.

Han Liang, the son of a Nationalist Chinese officer that fought the Japanese, was promoting a narrative of the war that more closely corresponds with the established history—but which is effectively banned by the Party.

The 65-year-old disappeared on Aug. 26, and public security officers later told human rights advocates that Han was serving a 15-day detention for “picking quarrels and provoking disputes,” according to Radio Free Asia.

Han’s arrest comes just days before the upcoming military parade in Beijing to celebrate the 70th anniversary of China’s victory against Japanese invaders in 1945. Regime authorities have taken great pains to crack down on unwanted blemishes such as smog, traffic, and independent online commentators in the run-up to the 12,000-man event, to be held on Sept 3.

It’s not Han Liang’s first altercation with public security. He has been relating tales from the war on the streets of Chongqing for years. In 2013, Han was wounded by police when he tried to publicly commemorate the 68th anniversary of the war.

Photos published on Boxun, a Chinese-language website based in North Carolina, show the retiree holding up placards depicting war heroes as well as Nationalist flags and leaders.

The history Han Liang expounds in his talks is a politically sensitive topic for the Communist Party, which rendered dubious contribution to the overall Chinese war effort. He is the son of a military officer serving with the Nationalist Chinese forces, which shouldered most of the fighting against the Japanese army.

Nationalist Chinese forces lost millions of men in epic battles attempting to defend major cities like Shanghai and Wuhan. Communist forces, meanwhile, carried out a policy of non-engagement in order to build up strength. During the eight-year war, the Communist Party launched only one significant operation against the Japanese, which was swiftly criticized by Chairman Mao Zedong, who worried that it revealed the true ability of his forces.

Rather than allow open discussion about wartime events, which could tarnish its reputation, the Chinese Communist Party has traditionally appealed to mass sentiment and a victim narrative that plays up Japanese atrocities.

And the Chinese regime has brought the stick down upon those who don’t accept its narrative, be it on World War II or economic turbulence or the deadly Tianjin port explosions. As of Aug. 31, hundreds of bloggers had been arrested for “bewitching the people,” according to a state-run China Central Television report.

In Beijing, authorities have closed off many of the capital’s main avenues in anticipation of the Sept. 3 Victory Day parade. Those living near the parade grounds have been instructed not to open their windows during the event, and even birds have been subject to removal—the New York Times reported that teams of trained monkeys were being deployed to destroy nests.

Describing Han Liang in an interview with a Radio Free Asia reporter, Zhang Qi, an acquaintance of Han’s and a member of the Union of Chinese Nationalists in Chongqing, said that he was a “passionate elder who professed the history of the Anti-Japanese War and early Republican Chinese history.” Zhang also said that Han was an active supporter of democracy who admires the Taiwan’s experiences with constitutionalism.

Zhang said that Han’s disappearance and detention at the time of the victory celebrations “speaks to how timid and cowardly the Communist Party is when it comes to the Anti-Japanese War.”