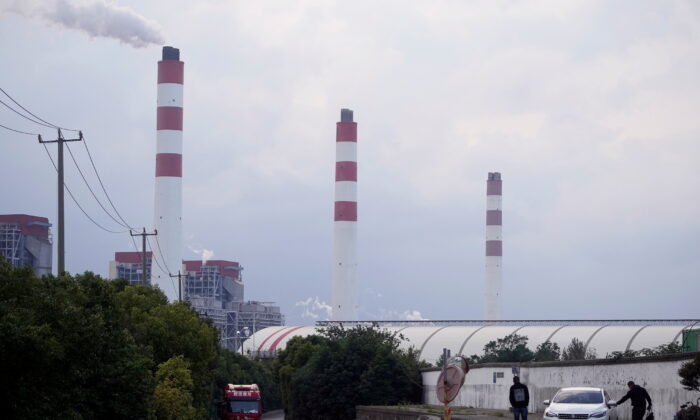 BEIJING—Earnings for China’s power utilities during the first three quarters of 2021 have plunged as the companies were squeezed by surging coal costs that they could not pass on to consumers.

Huadian Power International, a subsidiary of China Huadian Corp., on Tuesday reported profits for the January-September period dropped 58 percent from a year earlier to 1.6 billion yuan ($251 million) with a third-quarter loss of 1.8 billion yuan.

Huaneng Power International, a listed arm of China Huaneng Group, also said their earnings in the first nine months of the year dropped 91 percent year-on-year to 783.9 million yuan, with a third quarter loss of 3.5 billion yuan.

Both companies blamed the losses on cost increases from a surge in power demand, while at the same time coal prices jumped with Huadian saying in its statement, “The decrease in net profit was mainly due to the surge in the price of thermal coal.”

Other power generators are also preparing investors for losses.

Huadian Energy, also part of Huadian Group, forecast on Oct. 16 a net loss in the January-September period of 522.9 million yuan, versus a loss of 173.1 million yuan a year earlier. The company will report earnings on Oct. 29.

That same day, Datang International Power Generation, part of China Datang Corp., said profits over the first nine months of the year may fall by up to 100 percent from a year earlier to 2.67 billion yuan. Earnings will be released on Oct. 28.

Chinese power generation firms remain reliant on coal for more than 50 percent of their electricity generation despite a years-long effort to boost renewable power projects to meet amid Beijing’s climate change goals.

Chinese coal prices have gained nearly 190 percent this year on tight supplies as a result of stringent safety inspections and anti-corruption probes at major mining regions, and heavy rains submerging dozens of coal mines in the northern part of the country.

However, the firms said that their power tariffs only increased by less than 5 percent in the first nine months of 2021 from a year ago, despite a surge of electricity sales.

Analysts have estimated that a majority of coal-fired power plants in China are loss-making, while the National Energy Administration since July has been warning that a number of power firms in northwestern and northeastern China were facing operational difficulties because of coal shortages.

Earlier this month, the Chinese regime said it will price all electricity generated by coal-fired plants through market trading mechanisms and allow firms to pass more costs to some customers.

But, analysts from CITIC estimated that the power tariff increases would be inadequate to make most coal power plants profitable based on current coal prices, even though they have fallen by 15 percent in the past week after the authorities vowed to control them.

The power tariff rise could offset coal costs by up to 179 yuan per ton but spot prices at the port of Qinhuangdao, a major coal transportation hub, have risen by 437 yuan per ton this year, CITIC said.