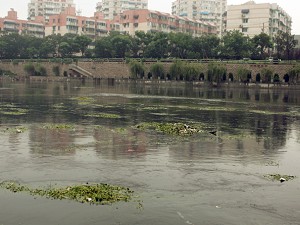 Polluted water and aquatic plants are seen in the Qinhuai River on July 4, 2007 in Nanjing, China. The local government said water supplies to 200,000 people in Shuyang County in Jiangsu Province had been halted for more than 40 hours after ammonia and azote polluted a local river. Mass water pollution incidents are on the rise as China's environment deteriorates. (China Photos/Getty Images)
China Business & Economy

According to a BBC report, a Chinese official disclosed that the publication of the green GDP report had been postponed indefinitely. This is the direct result of a disagreement between the State Environmental Protection Administration (SEPAC) and National Bureau of Statistics (NBSC) and the local government’s pressuring the two departments. Official Wang Jinnan from SEPAC has told media in Beijing that the green GDP project report has only been published in 2004. The reports for the following years are going to be delayed endlessly. The report was delayed because of an ongoing disagreement that exists in the report’s content and the methods used in publication.

Previously, the director of NBSC Xie Fuzhan said, “Because there’s no international standard for green GDP criteria, and no other country uses such accounting measures, the numbers cannot be published or tallied.” But Wang Jinnan countered that statement by saying, “Green GDP is a short term used by media and society. But green GDP is not different in nature from general environmental and economic accountability generally accepted.” He thinks there should not be any issue with the terms used in the report. Wang’s comment is the first time a SEPAC official has replied to NBSC criticism.

Wang pointed out that another reason the report is stalled is that some government officials at local levels have pressured the two departments. He said, “Some local officials are sensitive to the numbers. Early in 2005, about 10 provinces started preliminary green GDP calculations. Some provinces even asked the SEPAC and NBSC not to disclose the results. They are pressuring us.”

Wang said that there are a lot of local governments still placing a greater emphasis on the GDP. If environmental costs were deducted, the economic increase in some places would decrease dramatically. And thus they strongly resist the green GDP.

The official Chinese communist media Xinhua News Agency disclosed that the green GDP numbers for 2005 were finished and had been handed in at the end of 2006. The cost of pollution was higher than 2004. The report also includes statistics on pollution losses from different provinces and autonomous regions.

Xinhua agency disclosed that NBSC thought the report, especially the specific numbers from different areas should only be provided to the State Council for their reference. However, SEPAC believes the report should be published publicly as was the 2004 report.