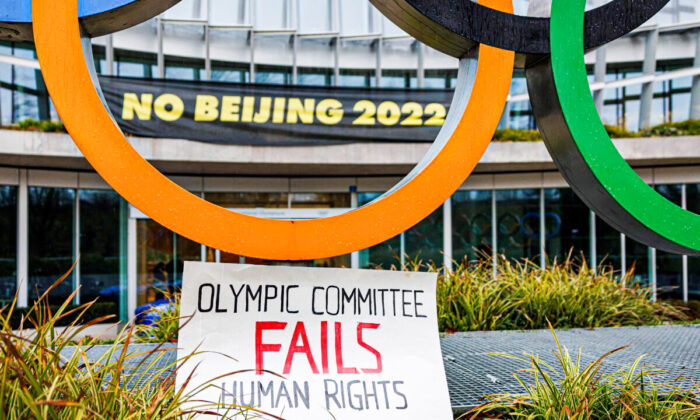 A placard at the entrance of the International Olympic Committee (IOC) headquarters in Lausanne, Switzerland, on Dec. 11, 2021, during a demonstration of Tibetan activists from the Students for a Free Tibet association. (Valentin Flauraud/AFP via Getty Images)
Chinese Regime

Frank Fang
journalist
Frank Fang is a Taiwan-based journalist. He covers news in China and Taiwan. He holds a master's degree in materials science from Tsinghua University in Taiwan.
View profile
Follow
and Joshua Philipp

The communist regime in China is going to be a bigger threat to the international rules-based order after the Beijing 2022 Winter Olympics, a China expert warned.

“The regime is going to become, I would expect, even more hostile to the established order than it has been before,” said Bradly Thayer, adding the Games would embolden Beijing to increase its push against some democracies, particularly India and Taiwan.

Thayer is one of the founding members of the U.S.-based group Committee on the Present Danger: China (CPDC), and coauthor of the book “How China Sees the World.” He sounded the alarm on Dec. 15 during an EpochTV webinar titled “China’s Genocide Games.”

China also hosted the 2008 Summer Olympics and Thayer explained that the Chinese Communist Party (CCP) sees the Games as an opportunity to boost its “prestige,” as well as “forcing the world to recognize what [the] CCP has accomplished.”

“It also allows Beijing to project the message that the future belongs to China,” he added.

Inside China, Thayer said that China’s current human rights abuses are “going to remain and certainly will tighten” next year after the Games.

The 2022 Winter Olympics are scheduled to start in China’s capital of Beijing on Feb. 4 next year and end on Feb. 20.

More than half a dozen countries have announced a diplomatic boycott of the 2022 Games, including Australia, Belgium, Canada, Lithuania, the United Kingdom, and the United States. The Biden administration announced the boycott on Dec. 6, saying Washington “cannot proceed with business as usual” in the face of the communist regime’s “ongoing genocide and crimes against humanity.”

In response to the U.S. boycott, China’s foreign ministry said that it will take “absolute countermeasures” and the United States will “pay a price” for its decision.

On Dec. 13, a coalition of more than 250 campaign groups—representing Tibetans, Uyghurs, Hongkongers, Chinese, Southern Mongolians, Taiwanese, and others—issued a joint letter, calling on European Union leaders to boycott the Games.

It was a “moral failure of the West,” Thayer said, that the Chinese regime was allowed to host the event. As for the U.S. diplomatic boycott, he said it was “the least” of what the United States should do.

“So much more should have been done by the Biden administration. They should have worked far earlier, to bring about a coalition of nations to send very important signals to the Chinese regime,” he said.

Some U.S. lawmakers have called on the Biden administration to impose a total boycott of the Games, meaning that U.S. athletes would not compete in the event.

The safety of U.S. athletes was also discussed during the webinar, particularly over whether the Chinese regime would kidnap U.S. athletes as retaliation against the United States.

On the kidnapping concern, Laura Harth, campaign director and human rights activist at Madrid-based Safeguard Defenders, said, “I would say it’s too far-fetched … imagine the backlash.”

However, she explained that the concern is still there considering the regime’s past record on hostage diplomacy and exit bans.

Currently, the State Department’s travel advisory on China warns U.S. citizens that Beijing “arbitrarily enforces local laws” and that they could be wrongfully detained or subject to an exit ban “without due process of law.” What’s more, it also says the Chinese regime uses arbitrary detention to “gain bargaining leverage over foreign governments.”

Harth pointed to a case involving Jeff Harper, a former Iowa Wesleyan University basketball player. Harper was held in isolation at an apartment complex in the southern Chinese city of Shenzhen for eight months before he was released in September 2020. He was detained and accused of causing a man’s death following an altercation.

In a recent report by Safeguard Defenders, Harper stated he lost 40 pounds during his solitary confinement. He was quoted as saying: “I would just sit around all day and do push-ups and work out. Stare out the window and look at the airplanes go by and hoping that this day would pass.”

“So I mean, this has happened. Why not again?” Harth said.