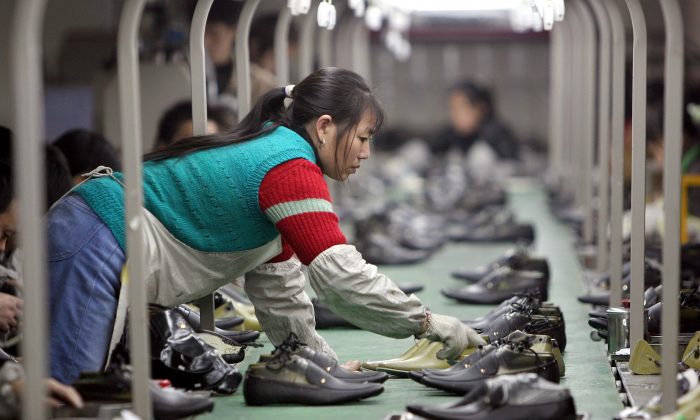 A worker pulls a pair of shoes from a production line in a factory located in Chengdu, China. (China Photos/Getty Images)
China

Last week’s official China purchasing managers index (PMI) figures appeared to confirm the optimism, with September PMI rising modestly to 49.8, up from August’s reading of 49.7. While any reading below 50 indicates month-over-month contraction, the official government data suggested that manufacturing weakness was stabilizing.

Then came the private Caixin/Markit PMI (formerly HSBC PMI) reading of 47.2 on Thursday, Oct. 1, as companies cut output at the fastest rate in six and a half years. Those figures were down from 47.3 in August.

The report cited a sharper contraction of manufacturing output in September driven by worsening business conditions and lowered client demand leading Chinese firms to cut production. This led to lower purchases of raw materials and inputs for the third consecutive month, and Caixin said September’s reduction in employment was the fastest seen in 80 months.

“Tepid demand is a main factor behind the oversupply of manufacturing and why it has not recovered,” said Dr. He Fan, chief economist at Caixin Insight Group.

“The weak PMI data indicates that the slowdown is worsening in the world’s second largest economy,” Zhang Yiping, analyst at China Merchants Securities, told the Wall Street Journal Sept. 23 after the September flash PMI. “The data reflects difficulties faced by the nation’s manufacturing sector that was weighed down by sluggish external and internal demand.”

The Caixin/Markit PMI has generally trailed the official reading as it tends to track small- to medium-sized businesses and private enterprises. The official PMI focuses on large companies and state-owned enterprises (SOEs).

Balancing the expectations of a state-mandated growth figure and the realities of an economy in turmoil has become an increasingly precarious task for Beijing.

Large firms and SOEs have received the most benefit from recent state-mandated stimulus measures such as devaluation of the yuan and other infrastructure investments. Large Chinese firms are aggressively expanding abroad, especially in North America, to take advantage of consumer demand.

On Thursday, Oct. 1, after the Caixin/Markit PMI figure was released, the Brent crude price dropped 1.4 percent from $48.37 to $47.69 on London’s ICE futures exchange. On the same day, the Bloomberg Commodity Index (BCOM) dropped almost 1 percent.

Being the world’s No. 2 economy and one of the largest buyers of commodities, the global markets are especially sensitive to China PMI readings.

Balancing the expectations of a state-mandated growth figure and the realities of an economy in turmoil has become an increasingly precarious task for Beijing. Over the last 12 months, China oversaw a stock market plunge over the summer, five interest rate cuts, and a surprise devaluation of the yuan, calling into question Beijing’s ability to manage its complex economy.

The latest PMI readings confirm that China’s economy may get worse, and that’s bad news ahead of Oct. 19’s release of third-quarter GDP.