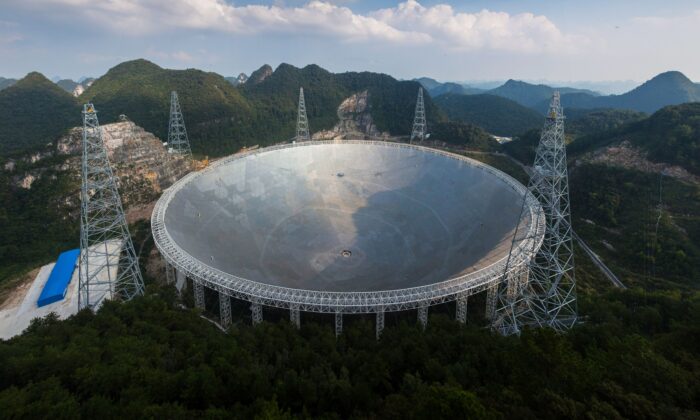 Beijing has been expanding its space exploration to search for extraterrestrials, which one Chinese astronomer once said is one of the ultimate goals of such explorations.

“Sky Eye” is a single-dish 500-meter aperture spherical radio telescope (FAST) with a receiving area of around 30 football fields. It was completed in September 2016 in Guiyang, Guizhou, a city in southwest China.

On Oct. 31, Wu Xiangping, an academician of the Chinese Academy of Sciences, said that the Chinese regime would support the construction of five more radio telescopes to form a massive array with the original FAST and become the world leader in space exploration.

Wu said that the Party officials claim that the 500-meter radio telescope was “not big enough and that they needed more of it,” during a domestic forum hosting young scientists on Oct. 31.

According to South Morning China Post (SMCP), the telescope’s extreme size means it can intercept signals that other radio telescopes will miss—possibly including radio waves generated by extraterrestrials. China has already quietly pointed FAST at some exoplanets near our solar system that may be able to support life, according to Professor Li Di, a senior scientist working at the site.

The FAST telescope is “well-positioned to conduct sensitive searches for radio emissions indicative of exo-intelligence,” said Li in a paper published in Research in Astronomy and Astrophysics in March last year.

Senior political commentator Shi Tao told The Epoch Times that the CCP’s expansion of the Sky Eye program is likely due to the original system’s shortcomings.

“It’s like [the CCP] can build a giant telescope dish, but it can’t make quality ballpoint pen refills. It wants to highlight the size of the telescopes to cover up its lack of other intricate abilities,” Shi said.

A former NASA Jet Propulsion Laboratory (JPL) engineer, Qu Zheng, told The Epoch Times that the FAST telescope only passively receives signals and does not transmit signals to the outside world.

“Even if they build 100 of them, there is still no real significance,” Qu said.

Qu believes that the CCP claims to lead the world in many fields, but there is no real evidence to back up those claims.

“The sole purpose of those claims is for external propaganda and to give the world the perception of achieving scientific glory under its communist leadership,” Qu said.

In a 2019 experiment, the Chinese team concentrated the FAST telescope on GJ273b, an exoplanet about three times the size of Earth that is 12 light-years away. However, the observation lasted only about five minutes. Later, the team announced plans in April 2020 to start searching for more distant alien life forms using the FAST telescope, but no notable discovery has been made thus far.