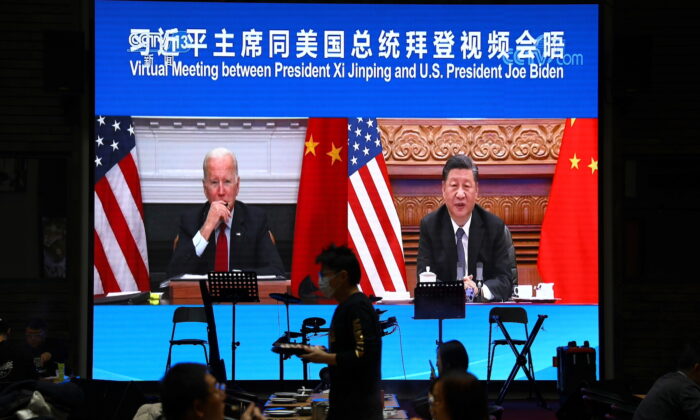 President Joe Biden on Dec. 15 “smirked and walked away” when a reporter wanted to know why he has not asked Beijing “to do more to be transparent on the origins” of COVID-19.

China’s coronavirus has now killed more than 806,400 Americans, according to the Johns Hopkins Coronavirus Resource Center.

China lied about the contagiousness of COVID-19 and then, while locking down China, pressured other countries to take arrivals from its soil without restrictions or quarantines.

The spread of the disease outside the People’s Republic, therefore, was the inevitable result of Chinese policies. In other words, China’s leaders have now deliberately killed more than 5.3 million people outside their country.

The President did not raise the issue of the disease’s origins during his two-hour phone call with Chinese ruler Xi Jinping in February. Nor did he talk about it during their three-and-a-half-hour “virtual meeting” in November. It does not appear Biden discussed the matter during a 90-minute phone call in September with Xi.

“The world deserves answers, and I will not rest until we get them,” Biden said in an Aug. 27 statement, as he released a summary of the findings of the U.S. intelligence community on the disease’s origins.

The American president evidently understands that China’s Communist Party is a bad actor when it comes to the coronavirus. “Critical information about the origins of this pandemic exists in the People’s Republic of China, yet from the beginning, government officials in China have worked to prevent international investigators and members of the global public health community from accessing it,” he also stated Aug. 27.

Yet Biden is apparently not interested in getting to the bottom of the matter. When it comes to China, he has become a master of empty words.

Why? There are Chinese business links with Biden’s family and with members of his administration and doubtless he wants to accommodate campaign donors wishing to do business in China, but most fundamentally the President, despite everything, speaks as if he has never let go of his decades-old benign view of the nature of Chinese communism.

In May 2019, he infamously proclaimed “they’re not bad folks,” referring to China’s leaders who were then busy committing genocide, crimes against humanity, and other Third Reich-scale acts of barbarism. At the same time, Biden said this about China: “they’re not competition for us.”

Biden these days sees China merely as a “competitor,” not, more appropriately, as an adversary or enemy. The competitor label implicitly assumes that the Chinese party-state accepts the current Westphalian international system, which recognizes the sovereignty of states that compete within its framework.

China, however, no longer accepts American sovereignty—or the sovereignty of any other society. In his speech on July 1, marking the centennial of China’s ruling organization, Xi Jinping promised in a much-publicized phrase to “crack skulls and spill blood,” but in more chilling words he said this: “The Communist Party of China and the Chinese people, with their bravery and tenacity, solemnly proclaim to the world that the Chinese people are not only good at taking down the old world but also good at building a new one.”

This is Xi-speak for the Chinese imperial-era system in which emperors believed they not only had the Mandate of Heaven to rule tianxia—all under Heaven—but they were also compelled by Heaven to do so.

Biden, like many Americans, likes to think that co-existence with the Chinese regime is both possible and desirable, and he has a hard time comprehending the ruthlessness of the Chinese regime or the comprehensive nature of its assault on the international system. The Communist Party, among other things, is breaking apart its neighbors, proliferating the world’s most dangerous weapons, supporting terrorists, and stealing hundreds of billions of dollars of intellectual property a year.

Furthermore, the Party is trying to destroy America. China’s ruling organization knows that the inspirational impact of American values poses an existential threat to its totalitarian pretensions. What Biden fails to understand is that Chinese communism is in a fight to the finish with the United States—whether the U.S. thinks so or not.

America is a far stronger society than China, which at the moment is especially fragile because of its debt crisis, but the Communist Party can destroy the U.S. simply because Biden is not adequately defending it from malicious—and unrelenting—Chinese attacks. Strength means nothing if America does not have the determination to defend itself.

“Whether you think China deliberately or mistakenly released its coronavirus on the world, its collective reactions have fantastically educated the People’s Liberation Army on how to make a possible future bio-attack a deadly success,” Richard Fisher of the International Assessment and Strategy Center told American Consequences.

That “deadly success” could result in the ultimate genocide.

The next disease from China could be a civilization-killer. China’s military is working on the next generation of pathogens, a new kind of biological warfare of “specific ethnic genetic attacks.” In other words, Chinese researchers are developing viruses, microbes, and germs that leave China’s people immune but kill everyone else.

The world, therefore, urgently needs to deter Xi Jinping from spreading the next disease. Biden’s failure so far to hold Xi accountable has given the Chinese a big green light to launch attacks that could kill Americans in unprecedented numbers.

The coronavirus is not the only Chinese weapon targeting Americans. China also kills tens of thousands of Americans a year by supporting criminal gangs designing, making, transporting, and selling fentanyl, one of dozens of synthetic opioids cooked in Chinese laboratories.

Biden in a Nov. 17 statement marked the overdose deaths of more than 100,000 Americans in the 12 months ended April 30. Not once did he mention China. Of that toll, approximately 64,000 deaths were attributable to fentanyl. Of that 64,000, almost all were the result of Chinese fentanyl.

Chinese leaders know exactly what is going on, given their near-total surveillance state. The working assumption is that Beijing knows about the far-flung and highly organized gangs, approves of them, and profits from their operations. The profits are laundered by other Chinese gangs through China’s state banks.

Yet Biden does not care about either coronavirus or fentanyl deaths. He is allowing a foreign power to murder Americans with no penalty whatsoever.

Today, Biden is scheduled to speak about what America can do to protect itself from the spread of COVID-19, but he will not talk about the most important thing the nation must do: impose the greatest of costs on China to make sure the Communist Party will not create another pandemic.

Biden’s failure to confront China, whether on coronavirus or fentanyl deaths, means he is derelict in discharging his most fundamental constitutional duty: protecting the American people from foreign attack.