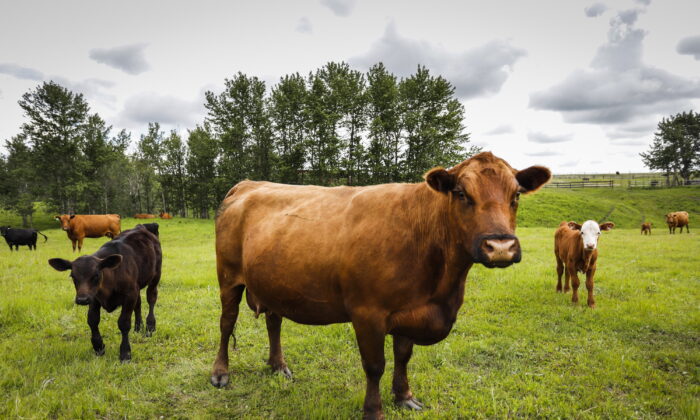 Cows and their calves graze in a pasture on a farm near Cremona, Alta., June 26, 2019. (The Canadian Press/Jeff McIntosh)
Canada

CALGARY—A cattle industry group says it is hopeful a newly imposed import ban on Canadian beef by China and two other Asian countries will be temporary.

South Korea, which is worth about $90 million per year to Canada’s beef industry, as well as the Philippines—which imports about $13 million in Canadian beef annually—have also suspended imports.

“I wouldn’t say it’s surprising, though we were hoping this wouldn’t happen,” said Dennis Laycraft, executive director of the Canadian Cattlemen’s Association. “We’re hopeful that these will be very short in duration, but it’s a foreign regulator that you’re dealing with, in different time zones and different languages.”

The detection of the atypical case, which was announced in December, is Canada’s first case of bovine spongiform encephalopathy in six years.

Atypical BSE develops spontaneously in about one in every one million cattle. It has been reported six times in the U.S., most recently in 2018, as well as a number of other countries.

Unlike the classic BSE strain, which has been linked to the fatal neurological disorder Creutzfeldt-Jakob disease, atypical BSE poses no health risk to humans and is not transmissible.

The Alberta government stated in December when it announced the discovery of the case that it was “not expected to have market impacts.”

But Laycraft said while there is “no reason” for a case of atypical BSE to result in trade restrictions, some countries are extra cautious and want Canada to provide additional information about the affected animal.

China also closed its borders to Brazilian beef last fall, after that country reported a case of the atypical strain. That closure lasted three months.

The discovery of the atypical case is not expected to negatively affect Canada’s status as a “negligible risk” country for BSE, as determined by the World Organization for Animal Health (OIE).

Canada was awarded that preferential status in May 2021, 18 years after the “mad cow crisis” devastated Canadian agriculture. It’s estimated that the crisis—which began with the discovery of a single case of typical BSE on an Alberta ranch in 2003—cost Canada between $4.9 billion and $5.5 billion as international borders slammed shut to Canadian product.

Since then, the Canadian beef industry and the Canadian government have worked to diversify and develop new markets for this country’s beef. Laycraft said with the loss of the Chinese market, Canada is still seeing good demand from key markets like the U.S., Japan, Mexico and Vietnam.

“We’re not as vulnerable as we were years ago to specific market closures,” he said. “So I think it depends how long the markets take to open back up again, but I believe (this could be resolved) in weeks. It could be days, but it should be no more than weeks.”

“Canada has proactively engaged with trading partners to provide information about this detection and maintain confidence in Canada’s safeguards against BSE,” Girard said in an email. “The government of Canada is confident in the strength of Canada’s BSE safeguards and the safety of Canadian beef.”

The atypical BSE cow was euthanized on the farm and did not enter the food or animal feed chain.