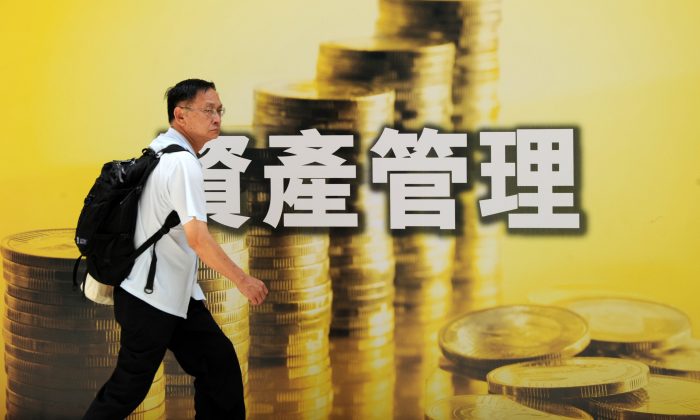 A pedestrian walks past an advertisement for investment related products in Hong Kong on June 21, 2010. (Mike Clarke/AFP/Getty Images)
China

China Orient Asset Management, the state-sponsored massive holder of bad debt, announced a restructuring plan Dec. 30 to pave the way for an eventual IPO. The plan would allow the Chinese Communist Party to pass ownership of the toxic asset pool onto third-party shareholders.

Orient, one of four so-called Chinese bad banks set up to buy non-performing loans (NPLs) from banks, said it would restructure into a joint-stock company and sell a small stake to China National Social Security Fund.

The fund will hold a small, 2 percent, stake in Orient, which is currently owned entirely by China’s Ministry of Finance. The restructuring will also pave the way for authorities to float an initial public offering later this year.

Great Wall also announced plans to form a joint-stock company with the China National Social Security Fund and China Life Insurance Group sometime in January. It aims to list either in Hong Kong or China in the first half of 2017, a senior company executive told Reuters on Dec. 24.

The bad banks serve as clearinghouses for China’s bad-debt problem.

The other two bad banks are already partially publicly listed. Cinda raised $2.5 billion in a Hong Kong IPO in 2013, while Huarong sold $2.3 billion of shares via Hong Kong in 2014.

Lipstick on a Pig

The bad banks were set up by China in 1999 to resolve the nation’s NPL problems resulting from years of bank loans to mismanaged state-owned enterprises (SOEs). Each of the four managers corresponded to one of China’s “big four” commercial banks—Bank of China, Agriculture Bank of China, China Construction Bank, and Industrial and Commercial Bank of China.

The bad banks bought NPLs from state banks, freeing the latter’s balance sheets so they could keep lending to SOEs.

To finance the purchases, which were sometimes overvalued so as to not saddle the state-owned banks with excessive losses, the bad banks were initially capitalized by the state. They borrowed an additional 570 billion yuan ($87 billion) from the People’s Bank of China at the time, and raised another 820 billion yuan via bonds, sold to the commercial banks.

The South China Morning Post estimated that in a five-year span after their creation, the bad banks collectively took on more than 2 trillion yuan ($300 billion) in non-performing loans from the banks. Many of the subsequent purchases were financed via bond issuances by the bad banks, either bought by the Ministry of Finance or the commercial banks themselves.

Essentially, the bad banks serve as clearinghouses for China’s bad-debt problem. Beijing is able to shift such devalued—and sometimes worthless—assets away from the banks’ balance sheets, swapped out for either cash or bonds issued by the bad banks, many of which were issued credit-worthy grades by the rating agencies. That’s how the country’s big banks can claim a 1 to 2 percent bad-loan ratio.

By itself, this tactic of an asset transfer can work if it’s an isolated affair. U.S. banks restructured following the financial crisis in 2007, selling pools of toxic mortgage-backed securities, credit default swaps, and other assets into newly formed entities and spinning them off into hedge funds. The banks took one-time write-offs at sale, but they were able to clean up their balance sheets, tighten risk management, exit legacy businesses, and move on.

China’s bad banks had the same mission back in 1999. They were given 10-year loans to finance the asset purchases and were supposed to go away after winding down the NPLs in 10 years. But SOE reform didn’t work due to politics: Swallowing the bitter pill and consolidating the country’s massively inefficient SOE sector would invariably cost jobs and upset the public, fueling social unrest and threatening the Party’s grip on power. So the bad banks were kept, became bigger than ever, and are now an integral part of Beijing’s “kicking the can down the road” financial strategy.

The bad banks allow China to prop up inefficient SOEs by granting them lifeline loans indefinitely. Banks will issue them more loans, and as bad debts accumulate, they’ll unload them to the asset managers. This cycle has played out over the last 15 years.

Non-Performing Loans for All

China’s bad banks purchase bad debts at a discount to begin with, with the commercial banks shouldering some losses from their initial loans. While on their balance sheets, the bad banks have the ability to manage unrealized gains and losses by dictating valuation and controlling write-downs. Carl Walter and Fraser Howie, co-authors of “Red Capitalism: The Fragile Financial Foundation of China’s Extraordinary Rise,” wrote that as of 2008 the bad banks were sitting on 1.5 trillion yuan of unrecognized write-downs.

Cinda was the first bad bank to IPO in Hong Kong in 2013, and we can use its publicly available filings to draw some conclusions.

What has been a boon for Cinda—courtesy of China’s equity market bubble over the last two years—is debt-to-equity swaps. The company exchanged some of its loans for SOE stock in recent years. As the country’s stock market rose, Cinda saw opportunities to unload the shares at a gain.

By all other measures, Cinda’s financial position has been deteriorating as it has grown its balance sheet. Assets excluding cash increased from 116.9 billion yuan (about $18 billion) to 500.5 billion yuan from 2010 to 2014, an increase of 428 percent. During this five-year period, return on average assets, or a measure of net profitability, has dramatically decreased from 6.3 percent to 2.6 percent. In addition, equity cushion as a percentage of assets has fallen from 25 percent in 2010 to 15 percent as of June 2015.

There are also signs of liquidity crunch. The bad banks’ initial 10-year term loans were continually restructured and extended by the central bank, and in 2013, the Ministry of Finance had to step in to pay a tranche of the debts of the bad banks on their behalf.

To keep up with the ever-increasing supply of bad debt, China has also increased the number of bad banks. In addition to the four national ones, provincial bad banks have been set up in more than a dozen regions, including in Zhejiang and Shanghai, to digest the debts of local governments and smaller SOEs. The bad banks have also been actively promoting Chinese NPLs to foreign investors; for example, Cinda held a presentation in May 2015 for foreign investment banks and hedge funds.

Beijing’s financial smoke and mirrors will no longer be funded by the state alone—investors will soon participate in the bad-debt game.

To give future retail investors the semblance of a more well-rounded asset management business—which is key for any IPO—the bad banks set up small investment banks and expanded into brokerage, underwriting, and insurance businesses. Their goal: diversify the business and muddle up their accounts in preparation for increased regulatory scrutiny. Most recently, Cinda also ramped up its margin loan business, which had grown 147 percent from December 2014 to June 2015 to 17.1 billion yuan ($2.6 billion).

Some analysts believe that the bad banks—similar to the large Chinese commercial banks—trade among each other to prop up earnings and inflate NPL values. With banks already cash constrained, there will be only so much money to move between the debt managers as they gobble up more soured loans.

With the inevitable IPOs of the asset managers, China’s bad banks will have new—and much needed—external sources of financing. Beijing’s financial smoke and mirrors will no longer be funded by the state alone.

Retail investors, retirees and pensioners, and foreign investors soon will all participate in the bad-debt game.