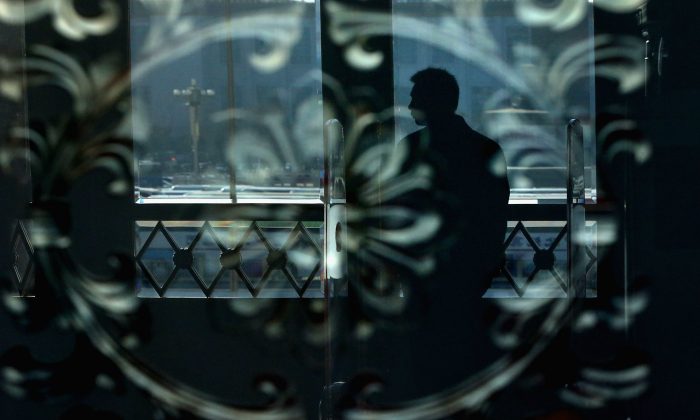 An usher stands guard reflected in a glass door at the Great Hall of the People in Beijing on March 10, 2013. (Feng Li/Getty Images)
China

The Communist Party’s new disciplinary chief at a major state-run shipping company has given an internal speech excoriating the corruption at the firm and in the Party generally, while boasting of his prowess in taking down powerful cadres.

Such speeches are usually considered highly secret—but this one, made by Xu Aisheng, the head of the Communist Party’s internal disciplinary group at the China Ocean Shipping Company, was leaked online.

The speech provides unprecedented insight into the anti-corruption campaign being waged by Party leader Xi Jinping and his lieutenants, who are trying to change the culture of lawlessness inside the Communist Party and its appendages. It also provides a vivid look at the personal jostling, and occasional flashes of braggadocio, involved in carrying out that campaign.

Summaries of the speech quickly spread on mainland Chinese websites, to the delight of Internet users, but were quickly purged. Though it was not possible to verify the authenticity of the document with the state shipping firm, the full version was archived on overseas Chinese sites and is widely considered genuine.

I’m telling you all, as the head of the disciplinary inspection team here, I’m not afraid of offending anyone.
— Xu Aisheng, Communist Party disciplinarian

Xu is a senior official with the Central Commission for Discipline Inspection (CCDI), a Party-run secret police agency that specifically focuses on crimes and infractions by Communist Party members. The CCDI dispatches teams that go on investigation tours around China, and also stations small teams in state firms and Party bodies, auditing books and sniffing out venality.

Xu was promoted to be a leader of the investigatory group in Cosco, as the state shipping giant is usually called, only two months ago. He reveals a keenness to establish his authority inside the firm, which employees around 40,000 people and sees yearly revenues of $10 billion, early on.

Xu boasted, for example, about how he had rooted out and taken down many “big tigers,” a term for powerful corrupt officials. These included Liu Zhijun, the former Minister of Railways, and Shuai Junqing, deputy general manager of the State Grid. Both are extremely powerful posts that hold control over billions of dollars in assets. The cadres who hold such positions have traditionally been able to extract vast rents from the public purse.

Liu Zhijun, who is said to have embezzled over $137 million, was one of Xu’s major conquests. “We all know that Liu was active in his ‘social engagements,’ we all know that he had high end patrons. But he still ended up in prison. Who said anything to protect him? Who dared to say such things?” Xu said. “I personally delivered Liu to jail,” he later added.

Another official that Xu recalled taunting was Ma Jian, the former deputy minister of the Ministry State Security, generally thought to be a supremely powerful position.

When Ma warned Xu away from investigating an official in the State Grid, because he was a spy protected by State Security, he rebuffed the request: “No problem, if you want to have people follow me, then follow me. If you want to spy on me, then do it. Whatever,” Xu recalled.

“Other comrades, including those in the CCDI, told me not to offend him, he’s state security,” Xu said. “Six months later, he was in jail.”

Xu continued: “I’m telling you all, as the head of the disciplinary inspection team here, I’m not afraid of offending anyone.”

Analysts suspect that Xu has the direct backing of Wang Qishan himself, the head of the CCDI, in order to be able to target such well-connected factional networks. Officials like Liu Zhijun and Ma Jian had operated in the shadows for decades, part of a broad network of patronage and influence connected to the former political dynasty of Jiang Zemin. Xi Jinping has, since he came to power in late 2012, been systematically dismantling this network of influence and power. Ma Jian is believed to have close ties to Zeng Qinghong, Jiang Zemin’s political mastermind for more than two decades. Liu Zhijun, removed in 2011, is known to have enjoyed a close relationship with Jiang Zemin.

Xu said that one of the forms of corruption that he has already observed at Cosco is paying for golf with company funds.

He expressed rage at statistics that said 198 officials spent $550,000 in 118 golf activities in 2013. Xu said he’d never heard of “any western enterprises that eat, drink and play golf on public funds. It’s impossible! It is only our Communist Party officers that take advantage of management loopholes.”

“Even Xi Jinping knows that you play golf,” he said at one point in the speech.

He gave the example of Phil Heatley, a former New Zealand cabinet minister who resigned from his housing and fisheries portfolios after being found to have wrongly used his ministerial expense account for two bottles of wine, worth $70 New Zealand dollars, and writing the cost off as a dinner.

“Even an incident like that was considered major corruption,” Xu said. “You all think again, if he ate and drank on the public purse, could he finish his meal? Could he use his expense account to play golf?”

Xu’s earnestness in combatting corruption, however, was only counterbalanced by his dubious explanation for how to resolve the problem at its root. Not an independent judiciary, genuine rule of law, or transparency to the public, but increased “Party discipline” and Communist Party control over state and company functions.

He related an anecdote in which he was unable to get the official flag of the Chinese Communist Party delivered to his office by an underling, after an entire week. When he questioned a general manager about the delay, the answer was that Party flags are hard to come by. “I was outraged,” Xu said. “I said that it’s the Communist Party’s world. How can you not buy a Party flag? What nonsense.”