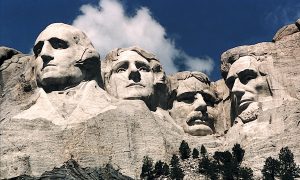 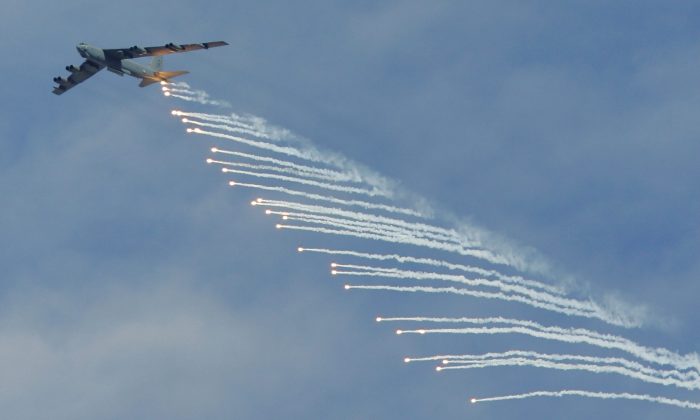 A US A B-52 Stratofortress demonstrates its firepower in a US Air Force display in Nevada. The United States does not accept Beijing’s rulings under the Chinese regime’s new Air Defence Identification Zone (ADIZ) and sent two B52’s over the zone without notifying Chinese authorities to make the point. (Ethan Miller/Getty Images)
Asia & Pacific

The United States has taken a stand against Beijing’s grab for air space over territory disputed by Japan and South Korea, saying it will not recognise the Air Defence Identification Zone (ADIZ) nor the requirement that aircraft entering the zone lodge flight plans and identify themselves.

US Secretary of State John Kerry said the United States believed “freedom of overflight” and other legal uses of air and space were essential for stability and prosperity in the region.

“We don’t support efforts by any State to apply its ADIZ procedures to foreign aircraft not intending to enter its national airspace,” he said in statement.

“The United States does not apply its ADIZ procedures to foreign aircraft not intending to enter US national airspace.”

The Chinese ministry warned that it was prepared to take “defensive emergency measures” against aircraft that did not comply.

Mr Kerry said the US was in discussion with Japan and other allies in the region and called for a “more collaborative and less confrontational” approach.

“We urge China not to implement its threat to take action against aircraft that do not identify themselves or obey orders from Beijing,” Mr Kerry said

In a separate statement US Defense Secretary Chuck Hagel described the move as “destabilising” and an “attempt to alter the status quo in the region”. He said the United States would not be changing the way it conducted its military operations in the region.

To drive the point home, two US Air Force B-52 planes flew into the newly declared zone November 26, CNN reported. According to a US official who CNN did not name, the flight lasted around an hour and the pilots did not identify themselves as required under China’s claim.

Bonnie Glaser, senior adviser for Asia with the Washington-based think tank, the Center for Strategic and International Studies (CSIS), says there are already encounters between Chinese and Japanese defence forces in the disputed region. The move will only heighten the likelihood of accidents, she said.

“In the waters around the disputed islands, the Japanese yell through megaphones at Chinese ships that they are in Japanese waters and the Chinese simply ignore them,” Ms Glaser said in an email.

Whether they do the same in the air and whether Chinese pilots intercept in a safe manner is a concern. “With Chinese and Japanese pilots flying at Mach 1, the possibility of a collision is quite high if intercepts are not conducted safely,” she wrote.

Japanese Prime Minister Shinzo Abe urged Beijing to scrap the new zoning, describing it as “dangerous” and likely to “invite an unexpected occurrence”.

“We demand China revoke any measures that could infringe upon the freedom of flight in international airspace,” he told the Japanese Parliament on Nov 25.

Japan is one of at least 20 other countries that have their own ADIZ but, unlike China, the Japanese request – but do not require – airlines to submit plans to enter its air defence zones.

Taiwan also claims ownership of the disputed islands, whose surrounding reefs and waters are rich in natural resources.

The Taiwanese National Security Council issued a statement saying The Republic of China (Taiwan) would continue to “safeguard its sovereignty” over the islands.

“That stance will not be changed by China’s announcement of the East China Sea ADIZ,” the council said.

South Korea expressed “regret” over China’s actions and a spokeswoman in the South Korean foreign ministry said that Seoul had told Chinese officials that it is “very very concerned” the Financial Times reported.

The territory claimed by Beijing in the new zone overlaps with South Korea’s own ADIZ and includes airspace over a submerged rock and area that South Koreans call Leodo.

“We don’t think it is fair – we think that area is our space,” the spokeswoman told the Financial Times.

“Australia has made clear its opposition to any coercive or unilateral actions to change the status quo in the East China Sea,” she said.

Chinese officials have been dismissive of concerns. Colonel Yang Yujun, a Ministry of National Defence spokesman, described US criticism of Beijing’s plan as “completely unreasonable” and “irresponsible”.

He also described Japan’s reaction as “absolutely groundless and unacceptable”.

But Ms Glaser believes the negative reaction from the US and other countries may have taken Chinese by surprise.

“I think the Chinese miscalculated,” she wrote in an email. “They got tough responses from the US, expressions of regret from South Korea and Taiwan, and a rejection from Japan.

“I doubt the Chinese anticipated all these reactions and it doesn’t serve Chinese interests to have tensions with so many neighbours simultaneously,” she said.

China has also laid claim to most of the South China Sea and is engaged in territorial disputes with several other countries in the region, including Vietnam and the Philippines.