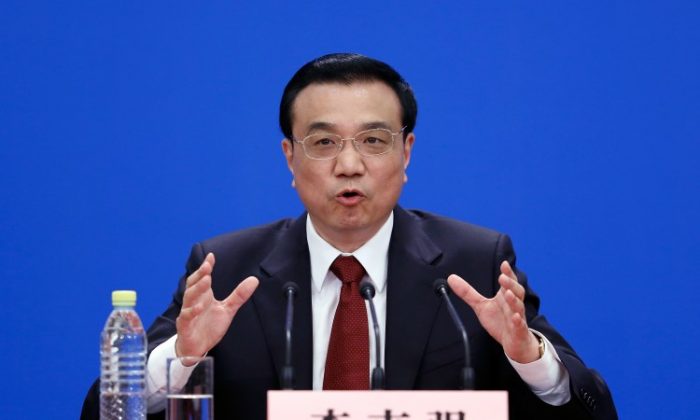 Chinese Premier Li Keqiang speaks at his first press conference at the Great Hall of the People in Beijing on March 17, 2013. (Lintao Zhang/Getty Images)
China

China was “shocked and outraged” by the suicide bombing attack in Karachi that killed three Chinese nationals and a Pakistani national, Chinese Premier Li Keqiang told his Pakistani counterpart on May 16.

Li spoke by phone with Pakistani Prime Minister Shahbaz Sharif and urged him to “make every effort to deal with the follow-up matters of the casualties” following the April 26 bombing near the Karachi University.

He also urged Shahbaz to increase security measures to ensure the safety of Chinese personnel and institutions in Pakistan, according to a statement from China’s foreign ministry.

In response, Shahbaz reassured Beijing that his government will do “its utmost to investigate the truth of the incident” and take robust security measures to protect all Chinese personnel in Pakistan.

Their discussion comes on the same day as Pakistani police arrested a suspected suicide bomber who planned to blow herself up near a convoy of Chinese nationals along the CPEC. Police recovered explosives and detonators from the woman.

Police said the female militant belongs to the Baloch Liberation Army (BLA), a terrorist group based in Pakistan’s Balochistan province that claimed responsibility for the April 26 blast in Karachi.

Following the Karachi bombing, BLA had ordered China “to immediately halt its exploitation projects and refrain from aiding the occupying Pakistani state” or face “even harsher” attacks.

China’s foreign ministry strongly condemned the attack, saying that “the blood of the Chinese people should not be shed in vain, and those behind this incident will surely pay the price.”

China is a close ally of Pakistan, investing over $65 billion for infrastructure in Pakistan under the CPEC, which is part of Beijing’s Belt and Road Initiative (BRI), which other countries have criticized as a “debt trap” for smaller nations.

Balochistan is home to a deep-water port in Gwadar city, which Beijing is developing under the CPEC. Baloch separatist guerillas claimed they have been fighting for decades for a greater share in regional mine and mineral resources.

Massive protests erupted in November 2021 against the CPEC as locals opposed the government granting licenses for Chinese trawlers to fish near Gwadar. Tens of thousands of people, including women, took part in the protest.

They protested against the severe shortage of drinking water and electricity, restrictions on movement, and limited sea access resulting from the high level of security for the CPEC that runs through the province. The protests eased after the government agreed to most of their demands in December.