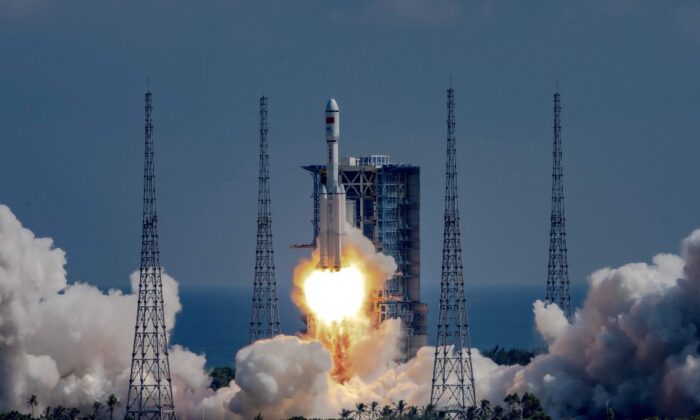 The Chinese regime is on a mission to become a global leader in space exploration, technology, and law-making, according to an official white paper released on Jan. 28.

“To explore the vast cosmos, develop the space industry, and build China into a space power is our eternal dream,” Chinese leader Xi Jinping is quoted by the report as saying.

The paper, titled “China’s Space Program: A 2021 Perspective,” was published by the regime’s State Council Information Office and provides a summary of accomplishments to date and plans for China’s continued ascension in outer space over the next five years.

“In the next five years, China will integrate space science, technology, and applications while pursuing the new development philosophy, building a new development model, and meeting the requirements for high-quality development,” the report states.

“It will start a new journey toward space power.”

The report follows a banner year for China’s space program. In 2021, the Chinese regime led 55 space launches, more than any other nation. The regime currently has plans to reach at least 40 space launches in 2022, an effort that began on Jan. 17 with the launch of a satellite on a classified mission.

Beijing completed the first phase of its effort to build a joint moon base with Russia in 2021 and, according to last week’s white paper, will complete its own crewed space station, the Tiangong, later this year.

Importantly, the report stated that the communist regime would be “proactive” in developing China’s domestic space industry to quicken its attempts to recreate foreign technologies in a process colloquially referred to as technology transfer.

“[The regime will] seize the opportunities presented by the expanding digital industry and the digital transformation of traditional industries, to promote the application and transfer of space technology,” the report states.

“A number of major space and science projects are in place to promote the leapfrog development of space science and technology, which spearheads overall technical advances.”

Leapfrog development refers to a strategy of technological development widely employed by Beijing that seeks to skip steps in the evolution of technology, thereby offering the regime the ability to pursue next-generation technologies without first investing in foreign technologies that are only moderately ahead of its own.

The Visage of Peace in the Stars

The white paper comes at a time of increased tensions between the Chinese regime and United States that has negatively affected international diplomatic, industrial, and military relations. Regardless, the paper describes Beijing’s ambitions in space as wholly peaceful.

“China has always advocated the use of outer space for peaceful purposes, and opposes any attempt to turn outer space into a weapon or battlefield or launch an arms race in outer space,” the report states.

The self-described dedication to “utilizing outer space for peaceful purposes,” however, is at odds with other goals stated in the report. Notably, it calls for the increased pursuit of security, national rights, and interests, to build up the nation’s “overall strength.”

Experts have warned that the Chinese Communist Party (CCP) is extending its “Three Warfares” strategy into space, attempting to dominate the extra-orbital landscape through legal, media, and psychological means.

The report also failed to describe the regime’s foray into hypersonic weapons, its test of anti-satellite (ASAT) weapons, and apparent preparations for space warfare, which run counter to its stated goals of peaceful development.

Moreover, the report reflects the regime’s grand strategy to displace the U.S.-led liberal order with its own version of global Marxism, which is being realized in space policy and law.

“China will speed up the formulation of a national space law and establish a legal system with this law at the core,” the report states.

The report outlines that Beijing will pursue a strategy of researching law and policy with the goal of leading international efforts to write the rules of space in its favor. It says China has the responsibility of “safeguarding the central role of the United Nations in managing outer space affairs” in a way that “serves the Belt and Road Initiative,” referring to Beijing’s massive infrastructure investment project used to amplify the regime’s economic and political influence worldwide.

To that end, the regime will greatly expand its bilateral and multilateral cooperation mechanisms, according to the report, in the contest for global influence with the United States. This, the report states, is necessary to promote the values of a “modern socialist country” for the sake of a “global community of shared future.”

Such efforts would serve “human progress.”