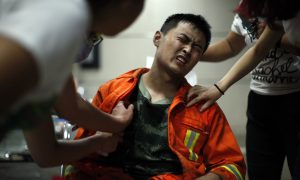 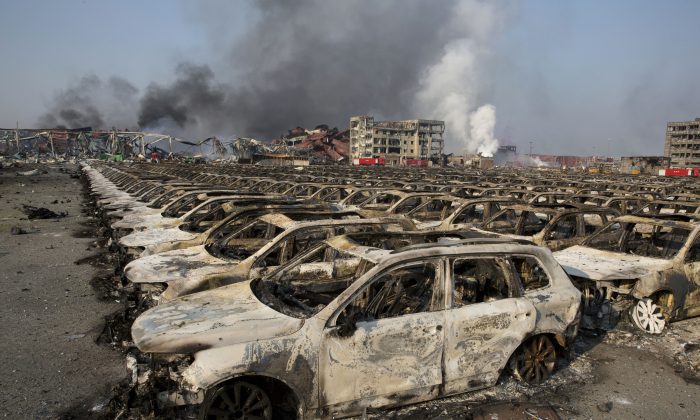 Smoke billows from the site of an explosion that reduced a parking lot filled with new cars to charred remains at a warehouse in northeastern China's Tianjin municipality, Thursday, Aug. 13, 2015. (AP Photo/Ng Han Guan)
China

TIANJIN, China—Beijing on Monday ordered a nationwide check on workplace safety and to correct all irregularities five days after huge explosions at warehouse in the port city of Tianjin killed 114 people and left 70 people missing.

The directive from the Ministry of Industry and Information Technology lamented the frequency of fatal workplace incidents and demanded a thorough national inspection on all safety risks.

Meanwhile, prosecutors have been tasked with investigating possible dereliction of duties and abuse of power that may have contributed to Wednesday night’s blasts.

Upset at government negligence, about 100 people whose residences were damaged in the explosions gathered Monday for a protest to demand compensation from the government.

Wednesday’s blasts originated at a warehouse for hazardous material, where 700 tons of sodium cyanide — a toxic chemical that can form combustible substances on contact with water — were being stored in amounts that violated safety rules. That has prompted contamination fears and a major cleanup of a 3-kilometer (1.8-mile) -radius, cordoned-off area in this Chinese port city southeast of Beijing.

Chinese work safety rules require such facilities to be at least 1,000 meters (3,300 feet) away from residences, public buildings and highways. But online map searches show the Ruihai International Logistics warehouse was within 500 meters of both an expressway and a 100,000-square-meter (1-million-square-foot) apartment complex. Those apartments had walls singed and windows shattered, and all the residents have been evacuated.

“We victims demand: Government, buy back our houses,” said a banner carried by the residents at a protest outside the Tianjin hotel where officials have held daily news conferences about the disaster. “Kids are asking: How can we grow up healthy?” read another banner.

Tianjin officials have been hard-pressed to answer how the warehouse was allowed to operate in its location. Questions also have been raised about management of the warehouse, and the country’s top prosecuting office announced Sunday that it was setting up a team to investigate possible offenses related to the massive blasts, including dereliction of duty and abuse of power. Ruihai’s general manager is in hospital under police watch.

Bian Jiang, a resident of one of the nearby housing complexes, said he was asleep when the first explosion struck Wednesday shortly before midnight.

“Twenty seconds later I heard the second explosion and saw the rising mushroom cloud. Then, I was thrown out of bed by the force of the blast. I was wondering if we would able to get out alive,” he said, adding that his home is now ruined. “All the windows are gone.”

On Monday, He Shushan, a deputy mayor, confirmed there were 700 tons of the toxic chemical sodium cyanide on the site at the time of the blasts, although the authorities said there have not been any substantial leaks. Authorities also said they had sealed all waterways leading into the sea from the blast site and built retention walls to prevent any runoff.

Sodium cyanide is a toxic chemical that can form a flammable gas upon contact with water, and several hundred tons would be a clear violation of rules cited by state media that the warehouse could store no more than 10 tons at a time.

The ministry’s directive ordered government authorities at all levels to check whether companies within their jurisdiction that produce and store hazardous materials comply with safety regulations, especially if they keep a safe distance from residential areas and do not exceed storage limits.

The death toll includes at least 21 firefighters — making the disaster the deadliest for Chinese firefighters in more than six decades — and their toll could go much higher because 64 remain missing. About 1,000 firefighters responded to the disaster.

The public has raised concerns whether firefighters were put into harm’s way in the initial response to the fire and whether the hazardous material — including compounds combustible on contact with water — was properly taken into account in the way the firefighters responded.

The massive explosions late Wednesday night happened about 40 minutes after reports of a fire at the warehouse and after an initial wave of firefighters arrived and, reportedly, doused some of the area with water.