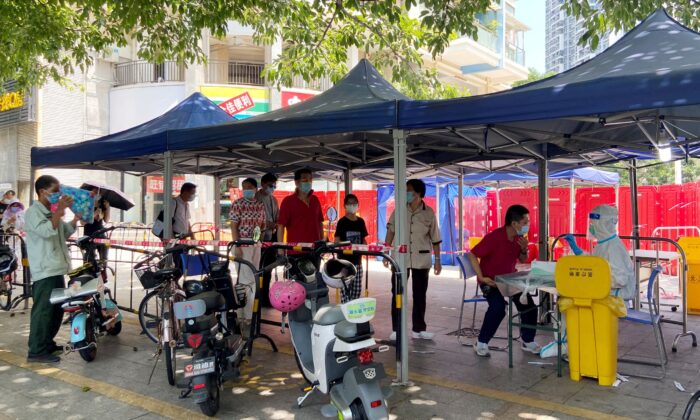 Residents line up to be swabbed for COVID-19 testing at a nucleic acid testing site in Shenzhen, Guangdong Province, China, on July 22, 2022. (Reuters/David Kirton)
INSIDE CHINA

Shenzhen authorities ordered manufacturers in the economic hub, including Apple suppliers, into a 7-day “closed-loop” production mode, as COVID-19 continues to spread in the city despite following the regime’s strict zero-COVID policy. The move has caused concerns about the possibility of longer mass lockdowns of factories like there were in Shanghai earlier this year.

Meanwhile, more mega cities are implementing partial lockdowns due to the resurgence of COVID-19, while officials are trying to lift some of the restrictions on international movement of people and goods to ease economic pressure.

According to the official notice, the “closed-loop” production mode restricts non-essential personnel going in and out of the factories; workers inside are tested daily for COVID-19 and they must show a negative nucleic acid test certificate issued within 24 hours before they can work. Shenzhen officials also reiterated that local regulators would “resolutely” implement Xi Jinping’s order to achieve “zero-COVID.”

The new control measure in Shenzhen has reignited concerns about the possibility of a “Shanghai-style lockdown” that forced tens of thousands of workers into quarantine in factories for months.

Factories of companies such as Apple supplier Quanta Computer Corp, chipmaker SMIC, and Tesla Inc. in Shanghai were put in “closed-loop” production for weeks or months when the city was locked down due to a COVID-19 outbreak from late March to early June. As a result, Shanghai’s GDP fell by 13.7 percent in the second quarter. It also disrupted the global supply chain.

Shenzhen has reported about 20 daily infections in the past a few days. On July 26, the Shenzhen Municipal Government ordered a partial lockdown in the districts of Futian, Luohu, Nanshan, Bao’an, Longgang, and others, where shops and residential areas were blocked by boards. The last time Shenzhen was under a citywide lockdown was from March 14 to 20 when factories across the city were also shut down for a week.

COVID-19 has resurged in Wuhan, the city where the pandemic first broke out. The local authorities announced on July 27 that Jiangxia District was locked down for three days, as asymptomatic infections had been detected in the district. During the control period, buses are suspended, no dining-in allowed in restaurants, entertainment venues, clinics, and farmers markets are closed, colleges and universities are locked down, and non-essential group activities are not allowed. The official notice also requires residents of the district to not go to other districts and prevents others from entering the districts, unless it’s deemed necessary by the authorities.

Meanwhile, the Chinese regime tried to ease the economic pressures caused by its extreme zero-COVID policy and control measures by lifting some restrictions on international travel and import of goods that have been in place since the beginning of the pandemic.

Since the end of June, the quarantine time in a concentrated facility for travelers from abroad has been reduced to seven days, and the following home quarantine time shortened to three days. Nucleic acid tests are still carried out regularly during the quarantine period. The Chinese regime banned direct flights from outside China to Beijing in early 2020, and any traveler must first land in a pre-approved city and be quarantined there before they can go to Beijing.

The Chinese regime also removed COVID-19 testing from ‘non-cold-chain’ food imports from low-risk countries or regions on July 22, after it dropped suspension of imported frozen foods in mid-July.