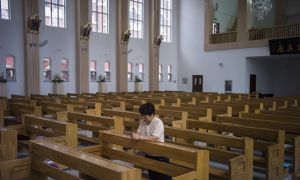 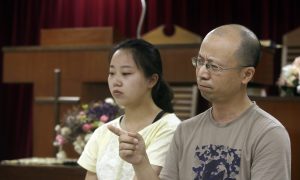 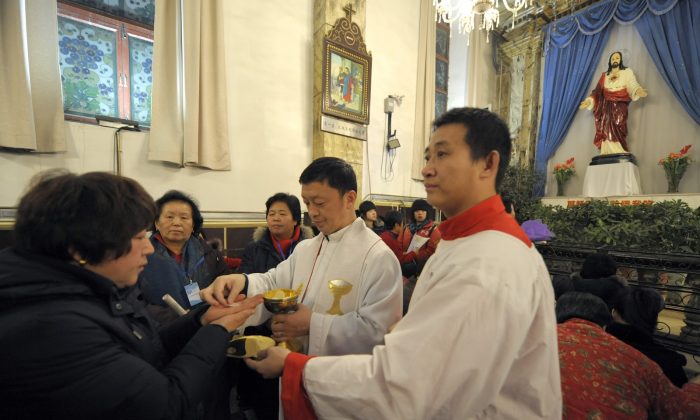 Chinese worshippers attend a holy communion during Christmas Mass at a Catholic church in Beijing on Dec. 24, 2009. (Liu Jin/AFP/Getty Images)
Thinking About China

China Orders Churches to Promote the Chinese Communist Party—or Else

On Feb. 1, new and onerous restrictions on churches, temples, shrines, and all forms of organized religious activity will come into force in China.

The new rules were issued by the Chinese regime’s Bureau of Religious Affairs on Nov. 20, 2019, but only made public by the state-run Xinhua News Agency, or New China News Agency, on Dec. 31. They outline in practical terms how the earlier “Regulations on Religious Affairs”—put in place on Feb. 1, 2018—will be monitored and enforced.

The “Control Measures for Religious Groups,” as the new rules are called, consist of 41 articles that deal with every facet of religious life. Each and every such activity—from weekly services and daily projects, to annual meetings and fundraising—must be reported in advance to the regime’s “Religious Affairs” office for its approval.

But there is an even more severe restriction as well: Each and every such religious group, as a condition of being allowed to exist at all, must first register with the “Civil Affairs” office of the communist regime.

The spiritual discipline Falun Gong and groups such as the Early Rain Covenant Church, which the regime has wrongly declared to be xiejiao (“heretical teachings”), will obviously not be allowed to register at all. They will, therefore, continue to be banned under the communist regime.

In Imperial China, Confucianism was the established state religion, while the term xiejiao was reserved for its non-Confucian counterparts. Since the establishment of the PRC, the established state religion has been communism or, more recently, “socialism with Chinese characteristics.” During this period, the meaning of xiejiao shifted strongly to the pejorative, used to refer to religious organizations that refuse to submit to the authority of the Chinese Communist Party (CCP).

Neither Confucianism, nor communism, nor “socialism with Chinese Characteristics” is a transcendent religion, of course, and China’s communist leaders don’t conceive of themselves as religious leaders. But any total ideology, such as communism or “socialism with Chinese Characteristics,” in fact constitutes a kind of quasi-religion. Both are being used by China’s political rulers today as a means to impose and maintain social and ideological control.

With the publication of the “Control Measures,” however, the communist party leadership now obviously has decided to go beyond merely demanding submission. It has decided that it will only allow Christian, Buddhist, and other groups to exist at all if they become active collaborators, helping the Party to maintain its grip on power.

This is the reason why the CCP in 2019 announced it was transferring responsibility for religious groups from the regime’s Bureau of Religious Affairs to the Party’s United Front Works Department. The same United Front tactics that were used to compromise, co-opt, and coerce China’s Socialist Party and other minor parties at the time of the Chinese Civil War into an alliance with the communist party are to be used again—this time to coerce religious groups into becoming the Party’s willing puppets.

It’s no longer enough that recognized religious groups merely submit to the authority of the Party. Such groups must support its continued rule, uphold the leadership of the CCP, propagate its principles and policies, and educate its staff and followers to do the same.

Article 5 of the new measures, for example, states that “religious organizations must uphold the leadership of the Chinese Communist Party, obey the Constitution, laws, regulations, ordinances, and policies; uphold the principle of independence and self-government [from all foreign groups]; uphold the overall policy of the sinicization of religion; practice the core values of socialism; safeguard national unity, ethnic unity, religious harmony, and social stability.”

Consider Article 17 in this regard: “Religious groups must propagandize the principles and policies of the Chinese Communist Party, along with national laws, regulations and ordinances to all of their religious staff and followers; [they must] educate and guide all religious staff and followers to embrace the Chinese Communist Party’s leadership, to embrace the socialist system, to upholding the path of Socialism with Chinese Characteristics, to obey national laws, regulations, ordinances, and policies; [they must] correctly resolve the relationship between national laws and religious commandments, strengthen awareness of the nation, the rule of law, and the people.”

Reading the new “Control Measures,” it’s patently obvious what the CCP is about. It wants to co-opt all transcendent religions in China, that is to say, to transform them into instruments of Party-State control over the religious elements of society. Such religions will be allowed to maintain certain ritual trappings, but their theology will be emptied out of its transcendent elements and refocused on such things as “embracing the Party’s leadership” and upholding the path of Socialism.

Article 2 explains the new role of religious groups in no uncertain terms. They are to be “the bridge and bond that unites the Chinese Communist Party and the People’s Government with religious leaders and their followers.”

Reading the new regulations, a Chinese Catholic priest commented: “In practice, your religion no longer matters, if you are Buddhist, or Taoist, or Muslim or Christian: the only religion allowed is faith in the Chinese Communist Party.”

Or, as another believer put it to me even more succinctly, “The walls are closing in.”