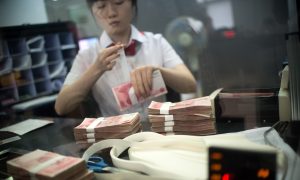 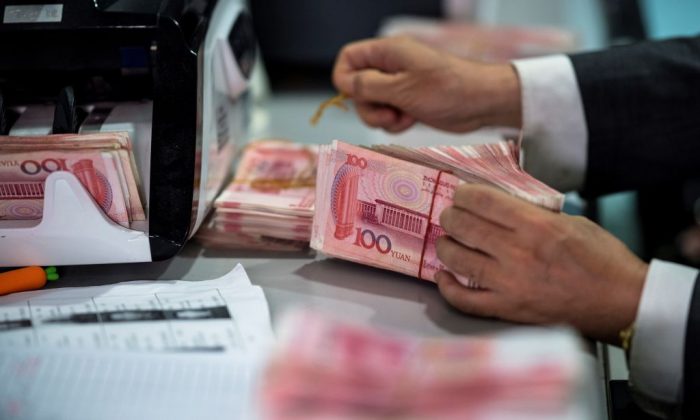 WASHINGTON—China has resorted to currency manipulation, allowing the yuan to fall against the U.S. dollar, in an apparent effort to blunt the effect of the trade war on the Chinese economy.

The United States labeled Beijing a currency manipulator, after the Chinese renminbi weakened to its lowest level since 2008, slipping below the level of 7 per dollar, which had been thought to be crucial for preventing a run on the yuan.

By keeping its currency undervalued, China can make its exports cheap and imports expensive, thus gaining a competitive advantage in international trade.

Governments use their own domestic currencies as a trade tool, in order to boost exports and build trade surpluses. Washington has long fought to deter currency manipulation, arguing that it has led to the loss or displacement of millions of American jobs.

Currency manipulation became a hot topic in international trade particularly between 2003 and 2013. More than $250 billion of trade balances annually shifted from deficit to surplus countries due to the currency misalignments during that time, Fred Bergsten, senior fellow and director emeritus at the Peterson Institute for International Economics, said in a report.

He said that almost 20 countries, including China, were heavily intervening in foreign exchange markets as part of their trade strategies. Manipulation of currency was a more common practice for manufacturing countries—mainly in Asia—oil exporters, and financial centers.

“The United States lost at least one million jobs as a result, especially during the Great Recession, when unemployment was already high. European countries were major losers as well,” he wrote.

Although currency manipulation has slowed in recent years, the practice continues to occur.

In May, the Treasury Department issued its semiannual report to Congress that analyzed the exchange rate and economic policies of its major trading partners. The Treasury, in that report, didn’t name any country a currency manipulator. However, it put certain trading partners on a monitoring list that included China, Japan, Korea, Germany, Italy, Ireland, Singapore, Malaysia, and Vietnam.

Beijing’s latest move to weaken its currency against the U.S. dollar prompted the Treasury Department on Aug. 5 to designate China as a currency manipulator.

What the currency manipulator designation means in practice remains to be seen, according to Stephanie Segal, deputy director and senior fellow at Center for Strategic and International Studies.

“Actions on currency have ushered in a new stage in the U.S.-China trade war that risks spinning out of control absent a concerted effort to get negotiations back on track,” Segal wrote in a report. “Now that escalatory actions have been taken at the most senior levels of both governments, it’s not clear how either side stands down.”

China’s move came on the heels of President Donald Trump’s announcement to impose 10 percent tariffs on an additional $300 billion worth of Chinese imports. In a series of tweets last week, Trump accused the Chinese regime of failing to deliver on a pledge to buy more U.S. agricultural products. He also said China hasn’t followed through on its commitment to stem the flow of the synthetic opioid fentanyl into the United States.

White House economic adviser Larry Kudlow defended the Treasury’s action and said “pouring money and devaluing currencies” shouldn’t be the answer. He noted that Beijing had devalued the yuan by at least 10 percent in the past 15 months.

“We’re in great shape economically. And frankly, the biggest loser is China right now,” he told reporters on Aug. 6.

For more than a decade, the central bank of China had maintained the exchange rate between 6 and 7 yuan per dollar. And on Aug. 5, the yuan dropped almost 2 percent in one day, reaching 7.053 per dollar.

Trump denounced China’s move to devalue the yuan, via Twitter, stating, “This is a major violation which will greatly weaken China over time!”

In another tweet on Aug. 6, he wrote, “Massive amounts of money from China and other parts of the world is pouring into the United States for reasons of safety, investment, and interest rates!”

“We are in a very strong position. Companies are also coming to the U.S. in big numbers. A beautiful thing to watch!”

Following the announcement of fresh 10 percent tariffs on the remaining $300 billion of Chinese exports late last week, China saw more than $2 billion in nonresident equity outflows, with almost $1 billion in outflows on Aug. 2, according to data compiled by the Institute of International Finance.

The Treasury’s response “marks the latest escalation in the ongoing trade and currency dispute between the United States and China,” Todd Elmer, a foreign exchange strategist for Citigroup, said in a note to clients.

“The decision by the Trump administration to label China a currency manipulator marks the first time in the past several decades the Treasury has used this designation, with China, Taiwan, and South Korea the last countries to be named in 1994, 1992 and 1989, respectively,” he wrote.