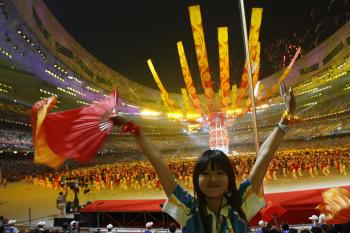 An audience member cheers during the closing ceremony of the Beijing Olympics. (Adrian Dennis/AFP/Getty Images)
Opinion

A Successful Olympics Accelerates the Collapse of the Chinese Communist Regime

Young is an associate professor in the Department of Business Management at National Sun Yat-Sen University in Taiwan. He is a leading scholar in Asia who has studied and taught the renowned management guru Dr. Peter M. Senge’s concept of a learning organization and the fifth discipline.

Professor Young gave a brilliant analysis and forecast of China’s present and future from the stand point of systems analysis and this article is a reflection on the conversation with him.

The Chinese communist regime has made an all out effort to put up a good show. To many, the Beijing Olympics has successfully showcased China’s new-found prosperity. The fact that China was able to successfully host such a complex international event and the fact that China won 51 gold medals was used by the regime to burnish its legitimacy through harnessing Chinese nationalism and pride, and to thus prove to the world, and more importantly to its own people, that communism does work and that China has grown to be a strong global power thanks to the communist regime.

Many in the Western world have already chosen to ride with China’s booming economy, assuming that economic growth and the free market must lead to democracy and free societies. Such changes will eventually benefit all, including the Chinese people and people in other countries, and therefore is a win-win situation. The Beijing Olympics seem to have proved their point.

To this, professor Young sent a strong warning message, “The more the Chinese communist regime pushes for economic growth, the faster the regime will collapse.”

Although it is a dream come true for many Chinese to witness China taking center stage of the world, the Beijing Olympics were however achieved at the great cost of many lives and many people’s well being.

Besides spending an enormous amount of money and resources in preparation for the Beijing Olympics, the regime has committed serious human rights violations, including forcefully evicting residents to make room for the Olympics, forcefully removing migrant workers and out-of-province and foreign students from Beijing, and arresting appellants on a large scale to drive them out of Beijing. The regime also tightened visa policy and thus threatened tourism.

In fact, China’s hosting the Beijing Olympics is a typical example of a shifting-the-burden archetype, in which a short term fix like the Olympics has temporarily relieved the many political and social problems China has been suffering for a long time. However, these unresolved problems will get worse as time goes by and will eventually lead to even bigger problems.

Economic Growth Alone Does Not Cut It

Linear-thinking analyzes a system with a straight line, and predicts the future by extrapolating the trend of the past into the future. This is how most people project China’s future, e.g., the projection of a strong economics in the future is based on the current rapid economic growth.

Non-linear thinking sees the whole picture and studies changes over a long period of time, as opposed to just focusing on its parts in a short time frame. Accordingly, instead of focusing on just the economic condition, non-linear thinking looks at how economic, social, and political conditions in China are interwoven.

Although China has been experiencing phenomenal economic growth since the economic reforms started, the political and social reforms have fallen far behind the economic reforms. Accordingly, an overemphasis and strengthening of a single leg alone will only accelerate the collapse of a three-legged stool.

It is true that the Chinese people are enjoying greater wealth now. Yet, with wealth has come corruption, and with corruption has come the fact that only a small group of people get to enjoy wealth.

In order to solve China’s problems, the regime must make progress systematically and holistically in all three areas, including political, social, and economic structure, instead of only limiting progress to the economic structure. Nevertheless, the Chinese communist regime has been reluctant to make political progress.

Throughout the history of the CCP, those who have advocated political reform, like Liu Shaoqi, Hu Yaobang, and Zhao Ziyang, have all failed and been punished for their efforts.

Therefore, it is impossible for Hu Jintao to push for any political reform in China because his relationship with the CCP is one that in which he and the CCP each takes advantage of one another. By nature, the CCP is very evil, and the party nature dictates the inevitable and constant struggles within a communist system.

Coca-cola Commercial Alone is Enough to Bring Down the CCP

The CCP controls people with fear. Despite of it, the momentum toward collapse has already been generated in China. When people overcome fear with moral courage, the collapse of a totalitarian regime will happen in a sudden instant.

An important way for a totalitarian regime to stay s in power is by controlling the media. Basically, the Soviet Union collapsed because people started to protest against the government and because of the information from the outside world.

Peter Drucker once said, “A Coca-cola commercial alone is enough to bring down the Chinese communist regime.” Why? Because the Chinese communist regime constantly lies to its own people, telling people how bad a free and democratic society is. Yet, Chinese people have seen with their own eyes through Coca-cola commercial that people in the Western world are living a very good life, shattering the lies they lived by.

From the Impossible to the Inevitable

A totalitarian regime stays in power by controlling people with fear, and when it collapses it collapses in a sudden instance. This is called the butterfly effect, which states that the flutter of a butterfly’s wings generates an air current that seems insignificant for a long period of time, yet the air current eventually develops into a tornado. If it takes 30 days to develop a tornado, it appears to be quiet and peaceful in the first 25 days, but signs of low tropical pressure and tornado start to surface in the last five days.

The same is true for the collapse of the CCP. The momentum has developed slowly and gradually. But only a few, like Peter Drucker, have realized this and predicted that the CCP will eventually collapse suddenly.

A Win-Win Solution to China’s Problems

Many Western countries have been attracted to trade with China because China’s growing population and economy offer a major marketplace for goods and services. Although China is becoming a global economic power, China is not the ideal country for that. For one thing, it is controlled by a totalitarian regime that can easily violate free and fair trade.

Therefore, for the sake of Chinese people, and for the sake of the rest of the world wanting to trade with China, reform in China’s political system should be a priority.

The Epoch Times has been providing a platform for the Chinese people to quit the CCP.  The global movement for quitting the CCP has inspired 43 million Chinese to renounce all ties with the CCP.  The core value of the movement is letting people understand the true nature of the CCP. Many people have come to realize the true nature of the CCP as being that of a liar, killer, evil cult, and political scoundrel, and have therefore stopped supporting the CCP.

The momentum for the massive wave of resignations from the CCP has been generated slowly and gradually. The CCP is threatened by this peaceful yet powerful movement, and is now facing the imminent danger of falling apart.

Many selfless and courageous people have paved the way for quitting the CCP movement. What seemed to be impossible is now becoming inevitable if the world comes together to support this movement. A free and democratic China without the CCP is a win-win situation for not only the Chinese people, but also the whole world.