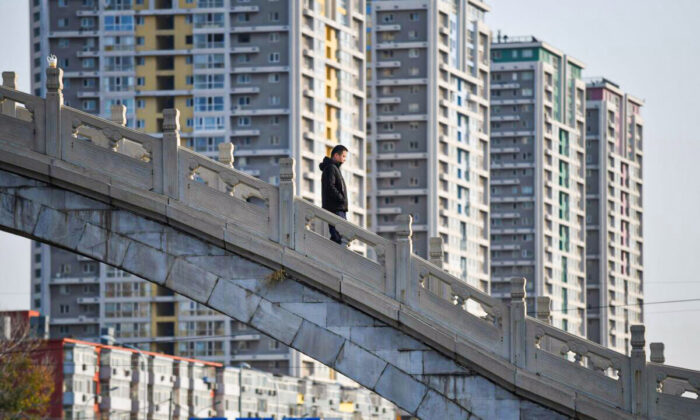 A man crosses a bridge near an apartment complex in Beijing on Dec. 1, 2020. (Greg Baker/AFP via Getty Images)
China Business & Economy

Chills over China’s property market spread in November as both home prices and sales slumped to a six-year low, according to official data on Dec. 15.

According to the latest new home price indices released by the National Bureau of Statistics (NBS), new home prices in 70 tracked Chinese cities slipped 0.3 percent month-on-month in November, the biggest decline since February 2015. It was worse than the 0.2 percent drop in October.

Only nine of the 70 cities saw monthly price gains in November, the fewest since February 2015, according to Reuters. Meanwhile, new home prices have dropped in 64 cities so far this year.

In a separate NBS statement, home sales by value slumped for a fifth month to 16.31 percent, flagging gloomy demand despite supportive measures taken by some cities to boost transactions.

China’s central bank on Dec. 6 announced a cut to the amount of cash that banks must hold in reserve, freeing more cash for lending. Such a move is the second this year, attempting to bolster slowing growth.

Yet unsold housing stock in China’s 100 biggest cities rose to the highest level in five years in November, according to a private-sector survey on Dec. 10.

The country’s property industry has been grappling with tighter regulations this year, including limits on how much property developers can borrow amid growing financial woes.

In November, China’s property investment by developers fell 4.3 percent, according to the NBS, as new construction starts as measured by floor area tumbled over 20 percent.

Chinese authorities on Dec. 14 reported a second case of the Omicron variant in a 67-year-old man from the southern city of Guangzhou.