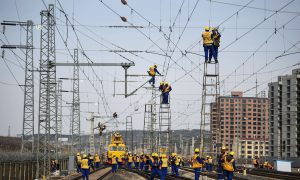 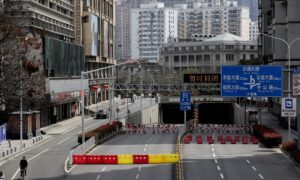 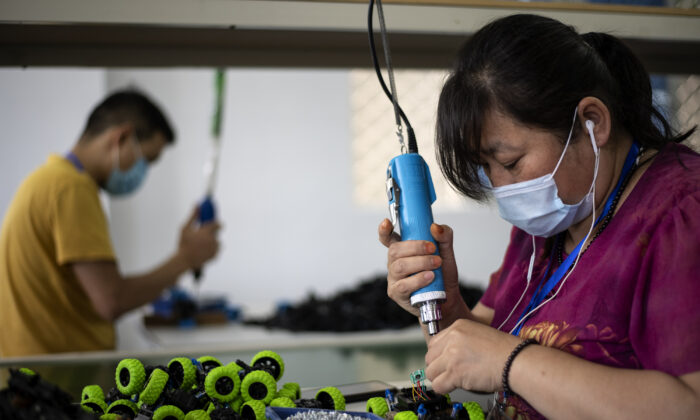 Workers assembling toys at the Mendiss toy factory in Shantou, Guangdong Province, on May 20, 2020. Cancelled shipments, returned goods, and a dearth of new orders have left Chinese exporters in crisis as the coronavirus hits its trading partners worldwide. (Noel Celis/AFP via Getty Images)
China Business & Economy

After a 6.8 percent year-over-year drop in the first quarter of 2020—the first decline in the Chinese economy since Beijing began quarterly reporting in 1992—a slow recovery is starting to take shape in the second quarter. But the positives are fleeting and “does not mean a return to anything approaching the old levels of growth,” said the China Beige Book (CBB) research service in its June 22 “early look” report on the Chinese economy in Q2.

The fledgling recovery is built on growing domestic Chinese demand, while the critical export sector is the biggest laggard due to weak foreign demand stemming from the COVID-19 lockdowns.

While China is sometimes thought to be an early indicator of how the recovery might go in the rest of the world, Shehzad Qazi, CBB International’s managing director, told The Epoch Times that “there are serious limitations to viewing China as a bellwether of global recovery.”

The reason is the Chinese economy is still heavily reliant on exports, whereas the United States recovery, for example, will hinge mainly on how consumer spending rebounds, he says.

Chinese regions that are more reliant on international demand, such as coastal areas like export-sensitive Guangdong, fared worse in Q2, while the interior—the western and southwest regions—led the recovery. For China to experience robust growth, its coastal areas need to start contributing.

CBB poses the question: “Are we about to see a return to the old Beijing playbook of heavy infrastructure stimulus as the solution to flagging growth? Policy statements are unclear but our credit data suggest yes.”

The Chinese authorities have been trying to pivot its economy from one driven by capital investment to one primarily driven by consumption, which encompasses both the retail and services sectors. But that objective has taken a hit due to the pandemic.

Chinese consumer spending has not returned to anywhere close to pre-pandemic levels, and retail was the worst-performing sector. The CBB report also notes that low interest rates did not encourage struggling retailers to borrow.

“China has always been better at stimulating production than consumption, as our retail results continue to affirm,” the report stated.

The services sector, however, was the best-performing one. It saw some improvements in business-to-business industries and hospitality. Since China is a net importer of services, weak global demand is not holding that sector back.

However, “overall, the so-called consumption economy, rather than boosting growth, remains a drag on it,” Qazi said.

Retailing has now been contracting for six months, he added, noting that the Q2 improvement was almost totally driven by infrastructure development and manufacturing.

Qazi says that what stands out so far is the relatively small amount of financial stimulus the Chinese authorities have pumped out, for example compared to programs undertaken by the United States and Canada.

In recent economic downturns in China, companies’ borrowing surged. But now, Qazi says low demand for loans, as seen among retailers, is due to the economic uncertainty.

“The formal borrowing metrics are not picking up an explosion in credit growth like they did during previous downturns,” he said.

In China, the authorities tend to boost the economy by producing more regardless of demand, with the result being excess supply—a recipe for deflation.

The Chinese economy is in a deep recession, and for the first time since 2002, the government said it was not going to set an annual growth target.

The partial rebound from the first quarter in Q2 needs to be put in the context of year-over-year plunge, CBB said.

“It’s impossible to properly characterize China’s current recovery without the year-on-year results, where every single key metric we track is still down massively,” the CBB report said.

In late May, the Chinese yuan fell to near its lowest level since the 2008 financial crisis.