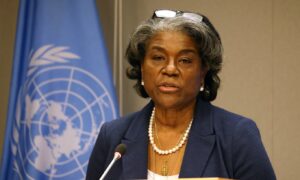 US Ready to Help Israel, Palestinians If They Seek a Ceasefire
0
Share Now
TelegramFacebookTweetEmailTellMeWeReddit
Copy Link 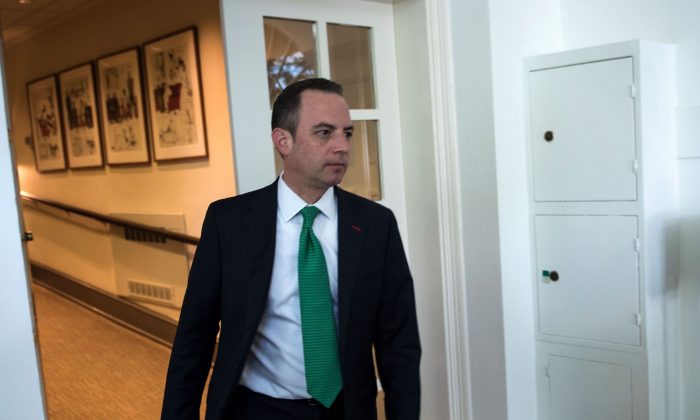 White House Chief of Staff Reince Priebus arrives before US President Donald Trump announces the US will withdraw from the Paris accord in the Rose Garden of the White House on June 1, 2017 in Washington, DC. (Brendan Smialowski/AFP/Getty Images)
Politics

China and North Korea have interfered in the U.S. presidential elections and have done so for many years, according to Reince Priebus, White House chief of staff.

Putin had told reporters in a press conference on July 8 that he believes Trump “was satisfied with [his] answers” denying interference in the election. Russian Foreign Minister Sergey Lavrov asserted the same.

Priebus said that the assertion was not true.

“The President absolutely did not believe the denial of President Putin,” Priebus said.

“What the president did is he immediately came into the meeting, talked about Russian meddling in the U.S. election, went after that issue at least two separate times. This was not just a five minute piece of the conversation. This was an extensive portion of the meeting,” he said.

“He also said, which drives the media crazy, but it’s an absolute fact, is that others have [interfered] as well. And that’s true, that China has, North Korea has, and they have consistently over many, many years,” said Priebus.

“People shouldn’t be interfering in our elections. In an ideal world that’s true, but in the real world everyone does that,” said Drew Berquist, a veteran of the intelligence community and founder of security-focused website OpsLens. “I know it’s appalling to know that’s going on, but that’s how it is.”

Ahead of the 2008 U.S. presidential race, the Chinese regime was accused of hacking campaign emails of both John McCain and Barack Obama. These attacks, while taken seriously, were broadly written off as typical intelligence gathering by a foreign government to understand the policies of each campaign.

In 2016, data analysis company Novetta released a report on the Lazarus Group, a hacker collective linked to North Korea, stating its malware “has been used to target government, media, military, aerospace, financial, and critical infrastructure entities in a limited geographic area, primarily South Korea and the United States.”

While U.S. intelligence has publicly commented solely on Russia in the past months, a complete list of foreign influencers would be “certainly longer than one country,” Berquist said.

In fact, China’s efforts go far beyond influencing elections. The Chinese regime has an entire military branch and two political branches, as well as large-scale systems for information control, to carry out its strategy of “political warfare,” as The Epoch Times has reported.

“We haven’t even begun to coordinate ourselves to take on this challenge,” said Richard Fisher, senior fellow on Asian military affairs with the International Assessment and Strategy Center.

“Political warfare seeks to influence emotions, motives, objective reasoning, and behavior of foreign governments, organizations, groups, and individuals in a manner favorable to one’s own political-military objectives,” states a 2013 report on the communist regime’s political warfare operations from Project 2049 Institute, a politics and security think tank.

China carries out the campaign through cyber attacks, propaganda, traditional spies as well as through ideologically influenced members of the Chinese diaspora and other “agents of influence.”

The first stage of political warfare, Fisher said, is to grow the CCP’s political and economic power globally, and to “promote the notion and to convince most of the world of the inevitability of China’s rise.” The communist regime will continue this stage, he said, until it is able to displace the United States as the “central political and strategic authority around the globe.”

If China can achieve that goal, it will move to the second phase of exporting its authoritarian “China model” of governance.

Russia also runs political warfare operations, but they are comparatively limited in scope. Its supporters are typically region-locked, in Eastern European states, and only among the ethnic Russian communities.

Most of Russia’s political warfare operations further abroad, such as in the United States, are carried out by smaller numbers of more official spies, and through electronic means—such as online state media, social media posts, and cyberattacks.