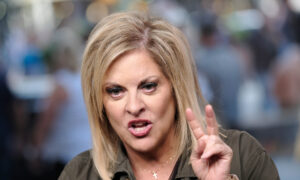 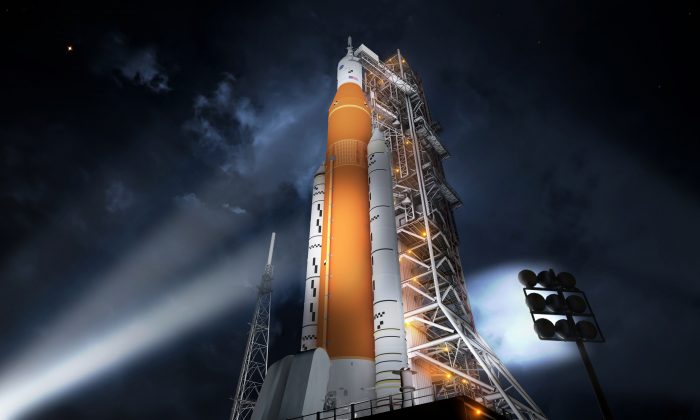 Artist concept of the SLS Block 1 configuration. For the first time in almost 40 years, a NASA human-rated rocket has completed all steps needed to clear a critical design review. The agency’s Space Launch System (SLS) is the first vehicle designed to meet the challenges of the journey to Mars and the first exploration class rocket since the Saturn V. (NASA/MSFC)
Viewpoints

China Must Not Beat America Back to the Moon

President Donald Trump signed a policy directive on Dec. 11, 2017, committing the United States to a return to the moon. A year later, it’s becoming increasingly apparent that China is reconfiguring its manned space program in order to “beat” the United States back to the lunar surface.

For a brief period in the late 1950s, both the United States and the former Soviet Union considered building military bases on the moon. The United States abandoned that idea quickly, while the Soviets continued to invest in moon-base technologies until the collapse of the union. China, however, in the late 1980s, put the People’s Liberation Army (PLA) in charge of its revived manned space program, which has consistently produced “dual use” benefits for the PLA.

This was demonstrated by China’s first manned Shenzhou-5 space mission in 2003, when the most important payload was two large optical Earth surveillance cameras. In September 2008, the Shenzhou-7 mission included the launch of a microsatellite as it passed about 28 miles from the International Space Station (ISS), basically a mock military interception. China’s first large space station may be completed by 2022 and can be expected to perform numerous military as well as civil missions.

But the moon may constitute the new “high ground” for the PLA.

In April this year, the Kanwa Defense Review magazine reported from a U.S. source that the PLA had recently held a large conference on military uses of the moon. In the early and mid-2000s, the former director of China’s moon research program, Ouyang Ziyuan, repeatedly stressed the strategic value of the moon for China.

For China, militarizing the moon, or ensuring that it can deny moon access to the United States and others, is consistent with its current vast projection of economic, military, and political power on Earth. The PLA wants to control low Earth orbit in order to dominate warfare on Earth. For the CCP, controlling access to the moon and Mars and a potential new era of economic and scientific progress, is essential to becoming the dominant power on Earth.

But, in contrast to the late 1950s, China, Russia, and the United States today are capable of developing the economical transport and the many systems required to sustain a manned and unmanned presence on the moon.

On Dec. 8, China launched its second unmanned lander mission to the dark side of the moon, featuring a new data relay satellite that occupies the Lagrangian point L2—a location in space where gravitational forces balance themselves out, meaning a space-craft can “hover” at that point.

Chinese sources indicate that in 2023 and 2026, they will send unmanned landers to the north and the south poles of the moon, important locations of possible resources like water, and the best locations for omnidirectional detection.

In late 2017, Chinese engineers revealed initial concepts for a manned moon base, which Chinese sources say may be built after 2030.

However, in the past two months, China has begun to reconfigure its manned space program in ways that may enable it to put people on the moon well before 2030, the previously expected launch date of its Long March-9 heavy space launch vehicle (SLV), which can transport 50 tons of crew transport ship and moon lander to the moon.

So, instead of one Long March-9 that may not fly until 2030, China may use two of their newest SLVs to separately launch a new moon lander to orbit around the moon, and a new manned spaceship that would carry the crew that would descend to the moon.

During a mid-November briefing in Moscow, the first Chinese astronaut, Yang Liwei, appeared to reveal what may be the first image of China’s two-stage moon lander. With this architecture, China would be accepting more risk, but may also put its people on the moon by 2025 or earlier.

In 2019 or 2020, the United States may launch NASA’s next heavy-lift SLV, called the Space Launch System (SLS), which may then launch a new Orion manned spaceship in 2023. But Americans may not return to the moon until 2028 or after, following the building of the new Lunar Orbital Platform-Gateway (known as Gateway), a small, three-person space station to orbit around the moon.

The Gateway is said to allow for the more economical shuttling of astronauts from the ISS to the Gateway, and then to a reusable shuttle-lander to the moon. However, the concept has its critics, who aren’t sure it will prove economical, especially should the ISS be retired after 2025. There is also the added risk of having to rely on the flawless function of multiple widely separate platforms to reach the moon.

Michael Griffin, NASA director during the George W. Bush administration and now Defense Department undersecretary for research and engineering, has called the Gateway “a stupid architecture” that shouldn’t be built until the United States can manufacture rocket fuel on the moon.

Griffin, who has urged a more direct return to the moon, was in charge of Bush’s “Constellation” program, which had the goal of returning the United States to the moon by 2020. However, President Barack Obama canceled this program in 2010.

While the United States must deny China the ability to control the moon and low Earth orbit, it must also be wary of Chinese stratagems that would have the United States divert its resources while China focuses on terrestrial military goals, such as conquering Taiwan.

A near-term and direct return to the moon would be less expensive than Gateway. While some number of SLS launchers should be purchased as a reserve capability, Washington also has the option of waiting to use Elon Musk’s reusable Big Falcon Rocket (BFR, now “Starship”), or Jeff Bezos’s Blue Origin, to build a decisive presence on the Moon. Should Musk overcome technology hurdles and meet the goal of launching by 2020, BFR/Starship could potentially transport 100 tons of cargo to the moon with significant cost savings.

As early as 2004, Griffin had warned that China could use its Long March-5 to beat the United States to the moon, resulting in great damage to U.S. prestige, which does matter when considering the deference that nations give to U.S. global leadership.

Even though it leads a humanity-crushing dictatorship, the CCP will use a potential victory in the new “moon race” to strengthen its credentials as it seeks global military power and to displace U.S. leadership. Beating China back to the moon is crucial for the United States, but it must also prepare to deter global Chinese aggression.

Rick Fisher is a senior fellow with the International Assessment and Strategy Center and the author of “China’s Military Modernization: Building for Regional and Global Reach.