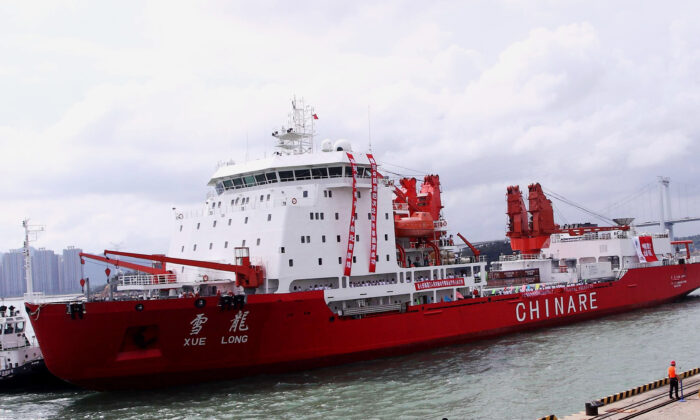 The Chinese research vessel and icebreaker Xuelong, which will depart for the Arctic, arrives in Xiamen, south China's Fujian Province, on June 27, 2010. The Arctic is much coveted by energy-hungry Beijing for its oil and natural gas. (STR/AFP via Getty Images)
Global Expansion

China Moving to Project Power Into the Arctic: Experts

China aims to project power through new economic and military projects in the Arctic, according to experts.

By securing new trade routes and military access in the Arctic, the Chinese Communist Party (CCP) seeks to expand its capacity for “global power projection,” according to Rick Fisher, a senior fellow at the International Assessment and Strategy Center.

“For China, the Arctic offers a strategic and tactical opportunity,” Fisher said during an interview with NTD, a sister media outlet of The Epoch Times, airing on Sept. 15.

“A lot of ice is melting and, as a consequence, new polar sea routes are opening up that will allow Russia and China to exploit Russian hydrocarbon reserves that have not yet been tapped. … They are so large, and the economics of maritime transport are such, that it’s become very attractive.”

The Arctic holds vast reserves of natural resources, including oil, natural gas, rare earth metals, diamonds, and pristine fishing grounds. As such, the formerly uncontested region will likely play an increasingly important role in global geopolitics in the coming years as access increases, and the global resource crunch continues.

The CCP declared China a “near-arctic state” in 2012, hoping to fabricate some semblance of legitimacy for its efforts to push into the region. Among those efforts is the so-called Polar Silk Road, a proposed route that would link Asia and Europe by traversing the opening waterways of the Arctic.

To gain more access to the Arctic’s bounty and to secure such trade routes, however, the CCP will need to appease the most powerful player in the region: Russia.

“With that, there would be an increase in Chinese flagships, icebreakers, petroleum transport ships, [cooperation] with the Russian navy, and it would also justify China sending its naval forces … into the Arctic region.”

To that end, Fisher said that China continues to grow its navy—already the largest in the world—to prepare for an increased presence in the Arctic.

“China’s navy is growing,” Fisher said. “It will have more ships to spare for operations in the Arctic.

The Stakes Are ‘Huge’

Bruce Jones, a senior fellow at the Brookings Institution, said in a separate interview with NTD that China and the United States are entering a protracted period of naval competition and increased risk of conflict. The Arctic, he said, would be a key focal point for both nations in that competition.

“It’s become one of the hottest zones of competition there is,” Jones said. “The biggest issue is that climate change is rapidly changing the ability to sail across the Arctic sea year-round.”

Jones said it is currently only possible to traverse the Arctic for five to six months a year without heavy icebreaker ships. Due to the melting of the polar ice caps, however, year-round travel through the Arctic could be possible in 10 to 15 years.

That shift would have profound implications for global trade, commerce, and strategy, Jones said, as it would effectively halve the distance between the East and the West.

“If you think about it from a trade perspective, the difference in distance between Shanghai and New York, if you can sail the Arctic route, is about half the distance if you have to go through the Suez Canal across the Mediterranean and then across the Atlantic Ocean,” Jones said.

“It’s similar in nature to what the Suez Canal did to trade between Asia and Europe when it was first established. It has the potential to be a major change in global commercial routes.”

For Jones, the explosion of Arctic maritime traffic that appears to be on the horizon also bears great risks—where trade goes, so, too, do militaries.

“This is where Russia now has the largest concentration of its naval power,” Jones said. “The United States has begun to return nuclear submarines to the Arctic for the first time since the end of the Cold War.”

“China is deploying repeated scientific missions, which are frequently dual use. So this is really becoming a zone of tense military buildup.”

Jones said that the risks and rewards of achieving Arctic dominance would be immense for any nation pursuing such a goal.