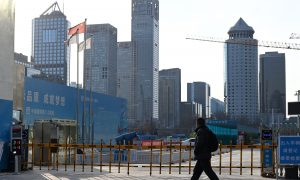 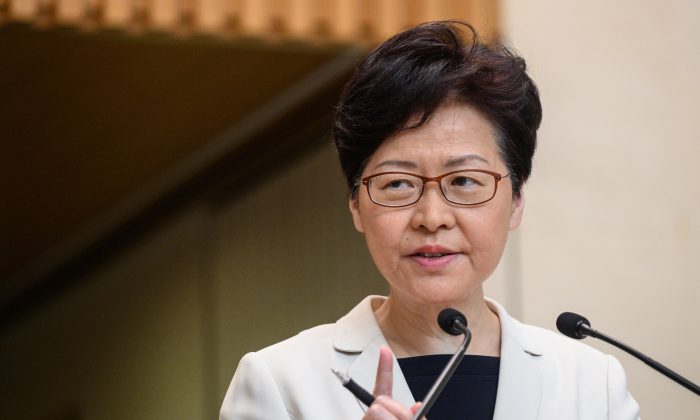 Beijing appeared to be sending deliberate warnings to Hong Kong protesters with its irregular troop rotation in the region and a state media editorial openly endorsing the Hong Kong government to declare a state of emergency.

According to Hong Kong media, Chinese military vehicles, including armor vehicles and troop-transporting vehicles, were spotted passing through roads in both the New Territories and Hong Kong Island. Hong Kong police were also spotted escorting these vehicles.

The timing—just two days before a mass march planned for Aug. 31 by the Civil Human Rights Front (CHRF)—is troubling.

“I don’t believe that, given the sensitive timing that we have right now, that this is anything routine,” said Civic Party lawmaker Dennis Kwok about the troop rotation, on a radio program by local broadcaster RTHK.

“I believe it’s a deliberate posture on the part of the PLA to tell, or warn, the Hong Kong people that they may be deployed,” Kwok said.

Protests stemming from a now-suspended extradition bill—which would allow the Chinese regime to transfer individuals to face trial in mainland China—have entered their 12th consecutive week. Many view the bill as Beijing’s encroachment on Hong Kong’s judicial independence.

The threat of Chinese troops being sent to quell protests has been a concern for weeks. In late July, Chinese paramilitary troops began holding exercises in Shenzhen, the Chinese city that borders Hong Kong.

Chinese state media for the first time said it supports the Hong Kong government exploring the use of an emergency ordinance that would give the city’s leader broad powers to clamp down on protests, calling it “a right step” to resolve the anti-extradition-bill crisis.

Hong Kong Chief Executive Carrie Lam came under fire two days earlier for leaving open the possibility of invoking the Emergency Regulations Ordinance, a law that could give her sweeping authority to make arrests, censor publications, enact new laws, and issue punishment during “occasions of emergency or public danger.”

“All laws in Hong Kong, if they can provide a legal means to stop the violence and chaos, the government has a responsibility to look into it,” Lam said at an Aug. 27 press conference. Her vague response prompted widespread alarm in Hong Kong society.

The hawkish Chinese state-run newspaper Global Times ran an editorial on Aug. 29 welcoming the discussion around the emergency ordinance, saying that it would allow Hong Kong to mobilize abundant legal resources and “help maintain the consistent logic of Hong Kong’s existing legal system.” The newspaper cited unnamed lawyers who claimed that the ordinance could be used to prohibit protesters from wearing masks, a method adopted by protesters to protect themselves from being easily identified by authorities.

It went on to condemn a “small group of people” in Hong Kong for “worsening the violence,” saying that the heated discussion about the ordinance indicates that the situation in Hong Kong has become dire enough to warrant exceptional measures.

The article warned protesters not to become “powder kegs.” “Stop before it is too late; it is the only choice for those rioters to avoid losing more … Sooner or later, Hong Kong will be back to order.”

Despite Edward Yau, Secretary for Commerce and Economic Development, offering reassurances that the emergency ordinance would not affect Hong Kong’s trade status were it to be invoked, local democracy groups were not convinced and saw it as the latest threat to Hongkongers’ basic rights.

Activist Joshua Wong, who is also the co-founder and secretary-general of local pro-democracy party Demosisto, said that by declaring a state of emergency, the Hong Kong government could essentially have unrestricted power to “do whatever it wants.”

“It is a de facto Martial Law, with no PLA marching on the streets, but would bring an equivalent threat of violence to the city,” Wong wrote in a tweet after Lam’s press conference on Tuesday.

“Carrie Lam’s mooting some emergency law that would give her practically unlimited powers to shut down Hong Kong, amounting to putting this city into a coffin and hammering in nails,” legislator Claudia Mo said on Twitter.

Charles Mok, a lawmaker and IT advocate, said that the emergency ordinance would allow the government to take control over telecommunications and even shut down internet service, which would be detrimental to the city.

“[It] will truly be the darkest day for Hong Kong,” he wrote on Twitter.

Fears of an internet shutdown have triggered an urgent statement from the Hong Kong Internet Service Providers Association on Aug. 29.

Any “insensible” internet restrictions, it warned, would “start the end of the open internet of Hong Kong,” ultimately “putting Hong Kong’s internet behind a big firewall.”

Ng Ming-yam, a local councilor in the Tuen Mun District, told the Hong Kong bureau of The Epoch Times that Chinese troops’ recent movements in Hong Kong and the emergency ordinance are scare tactics that go hand in hand in an attempt to discourage protesters from coming out—though he believed those would only have the opposite effect.

“I think more people might take to the streets. It’s no use to threaten them,” he said. “The more you pressure and scare Hongkongers, the more they will come out to use their feet and sweat to demonstrate to the world they are rational and peaceful.”

Lam’s popularity has continued to dip since mass protests erupted in June. According to the latest poll by the Hong Kong Public Opinion Research Institute, Lam’s overall approval rating is 24.9 as of August, an all-time low among Hong Kong leaders since 1992.