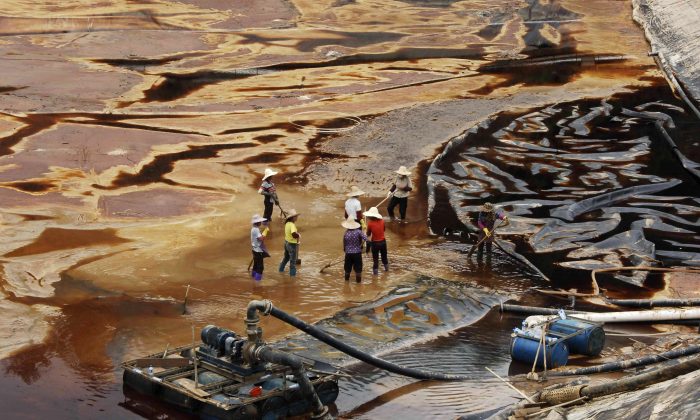 Workers drain away polluted water near the Zijin copper mine in Shanghang on July 13, 2010, after pollution from the mine contaminated the Ting River, a major waterway in southeast China's Fujian Province. Water pollution is a severe environmental problem in China and contributes to high cancer rates. (STR/AFP/Getty Images)
Social Media

The article was published on World News Daily Report, which claims to be a “satire” website. The fake report says that the miner was trapped after a mine collapsed and killed 78 workers 17 years ago.

The disclaimer for the website says, “World News Daily Report is a news and political satire web publication, which may or may not use real names, often in semi-real or mostly fictitious ways. All news articles contained within worldnewsdailyreport.com are fiction, and presumably fake news. Any resemblance to the truth is purely coincidental, except for all references to politicians and/or celebrities, in which case they are based on real people, but still based almost entirely in fiction.”

The article has been shared tens of thousands of times, and it still appears to be getting shared as of Wednesday.

However, the article may have unknowingly shone a spotlight on China’s perilous mining industry, considered the deadliest in the world.

Late last week, 11 people were killed in a coal mine accident in China’s Shaanxi Province. Those who were killed were workers who were in a shaft when a cement pipeline detached, according to the PTI news agency.

The Shaanxi accident was the second mining accident in May. According to the China Mine Disaster Watch, a mine accident killed two on May 9 in Heilongjiang Province.