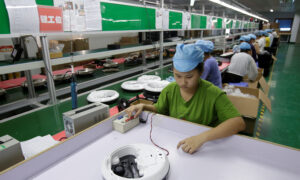 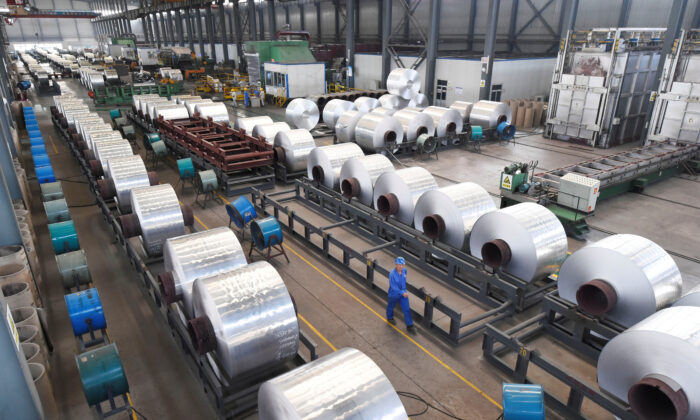 Workers are seen next to aluminium rolls at a plant in Binzhou, Shandong Province, China, on Sept. 13, 2018. (Reuters)
China Business & Economy

BEIJING—Inventories of metal in China piled up this week, data from consultancies and the Shanghai Futures Exchange (ShFE) showed, underscoring persistent sluggish demand in the world’s top metals consumer amid the coronavirus outbreak.

Stocks of five main steel products held by traders in China, including construction steel rebar and hot-rolled coil used in cars and home appliances, hit a new all-time high of 25.27 million tonnes on Mar. 5, according to Mysteel, while ShFE data showed copper inventories near a four-year high.

The sky-high inventory levels show that excess supply is still hanging over the market despite China’s efforts to get its economy up and running again as the number of new virus infections shows a downward trend.

Chen Derong, chairman of China Baowu Steel Group, said this week it would take another two months for bring his company’s inventories back to normal levels due to low operating rates downstream. Baowu overtook ArcelorMittal as the world’s biggest steelmaker in 2019.

In base metals, inventories of copper, widely used in power and construction, rose by a hefty 11.1 percent from the previous week to 345,126 tonnes, the highest since April 2016, according to data released on Friday.

Aluminum stocks meanwhile rose by 9.2 percent to 479,472 tonnes, the highest since May last year.

The most traded aluminum contract on the ShFE had earlier on Friday hit a 41-month low of 13,020 yuan a tonne as demand from downstream fabricators, which were slow to return from an extended Lunar New Year holiday, struggles to return.

Stocks of zinc, used to galvanize steel, nudged up another 1.5 percent to their highest since April 2017.

Demand is not expected to fully recover until late March or even April, three analysts said.

“Each industry is recovering step by step,” said Zhuo Guiqiu of Jinrui Futures. Some construction-related sectors, like cement, have been slow to resume production, which will in turn “curtail demand for other materials like rebar,” he added.

While more than 20 regions in mainland China have lowered their emergency response levels after being on high alert when the virus spread was at its peak, the central government remains cautious about lifting curbs, especially with some cases coming in from overseas.

A Beijing-based trader who sells steel products all over the country said his firm was still waiting for government permission to send out orders.

By Min Zhang and Tom Daly