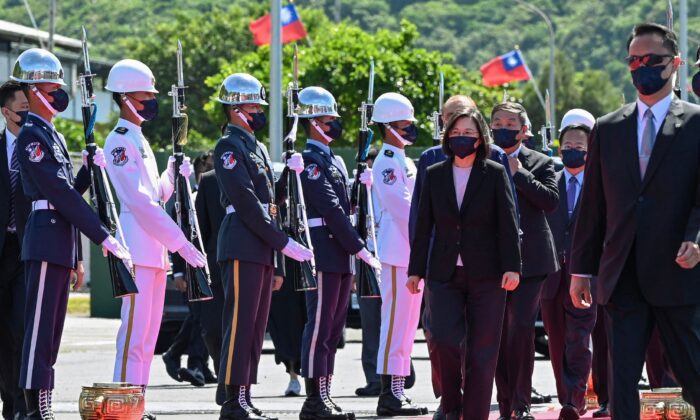 Taiwan's President Tsai Ing-wen (C) attends an inauguration ceremony of a Ta Chiang Corvette at a navy base in Yilan on Sept. 9, 2021. (Sam Yeh/AFP via Getty Images)
Subverting Taiwan

China May Impose an ‘Economic Blockade’ on Taiwan to Force Submission: Experts

The Chinese Communist Party (CCP) has ramped up its threats to Taiwan as the United States reportedly considers a measure favorable to the self-ruled island claimed by Beijing.

The Financial Times recently reported that the Biden administration is “seriously considering” allowing the island to change the name of its de facto embassy in Washington to include the “Taiwan.” The office is currently called the “Taipei Economic and Cultural Representative Office.” The report prompted Global Times, a hawkish newspaper controlled by the CCP, to publish an editorial charged with threats of economic and military action against the small East Asian island.

The Epoch Times spoke to Michael E. O’Hanlon about the plausibility of these types of threats coming to fruition in the near future. The senior fellow and director of research in foreign policy at Washington-based think tank Brookings Institution said he considers an “economic blockade” to be the most feasible action to be taken against Taiwan—and the repercussions could be enough to cripple the small island. By definition, an economic blockade involves the intentional disruption of a country’s economy.

Rather than immediately taking military action, the Chinese regime, according to O’Hanlon, is much more likely to “look for ways to gradually turn up the temperature on Taiwan” with various kinds of economical, psychological, and political pressure. An “economic blockade” scenario is more conceivable than an attempted invasion, he said.

Dan Steiner, a retired U.S. Air Force colonel and global strategist agreed, saying an economic attack would be the “most plausible course of action” for Beijing in the near future. Bending the will of the Taiwanese people to accept unification with mainland China is “a sound concept—and economic pressure is an integral part of that,” he told The Epoch Times. According to the CCP’s campaign of “unrestricted warfare,” Steiner said, “economic tools are in parity with physical tools.”

O’Hanlon said that “shutting down the Taiwan economy by interfering with ships coming in and out of Taiwan is a substantial threat—even if the island is not completely cut off.” For example, hampering with global supply chains moving in and out of Taiwan could greatly harm their stock market, cause the investor community to pull away, and potentially lead to a crippling recession, he said.

In this scenario, the Chinese regime “would get enough leverage on Taiwan to establish some demands that could lead to something that looks like reunification,” O’Hanlon said.

But the CCP is slick on the global stage, he noted. “Don’t be surprised when things like medicines and other goods are allowed into Taiwan to give the appearance of being humanitarian when their actions actually say otherwise.”

Steiner doesn’t believe the Chinese regime would risk the embarrassment of Taiwan “bloodying their nose” if there were an actual physical confrontation. Faced with the possibility of the United States stepping in to defend Taiwan, the CCP likely doesn’t want to take such risks and pursue a military invasion, he said.

While O’Hanlon perceives an invasion to be a distant possibility, even the slightest chance of a military response remains “very worrisome.” An outright attack on Taiwan, he said, would be “a tectonic event in world affairs,” something more than an internal or regional conflict. Such an attack would risk American intervention, prompting possibilities of a third world war or nuclear war, according to the expert.

In early March, the then-head of the U.S. Indo-Pacific Command (INDOPACOM), U.S. Adm. Philip Davidson, said that the threat of the CCP invading Taiwan will manifest in the next six years. U.S. Adm. John Aquilino, now the INDOPACOM head, later said the threat of a Chinese invasion is “much closer to us than most think.”

O’Hanlon doesn’t rule out other forms of military attacks, including cyberattacks or a strike on a shipping vessel at some point in time. Either option could, ultimately, interfere with Taiwan’s economy, he added.

According to O’Hanlon, Taiwan would be best served by stocking up on essential supplies so it could “ride out” a blockade for a while. But Steiner cautioned that the CCP is patient, and Taiwan may not be positioned to withstand the regime’s long-term pressure of economic isolation.

Meanwhile, the island needs to continue shoring up its defenses, O’Hanlon said.

“It would be well-advised for Taiwan to make sure the invasion scenario is completely unthinkable by continuing to improve ways of repulsing Chinese ships as they approach the shoreline,” he said.

To that end, the Taiwanese government plans to increase its defense spending by $8.69 billion ($240 billion Taiwan dollars) over the next five years.

O’Hanlon, however, questioned the benefit of the recent commissioning of a domestically-made warship in Taiwan. The naval vessel has been labeled a “carrier-killer” warship, designed to bolster defense capacity amid heightened tensions with the Chinese regime.

Should the Chinese regime ever attack Taiwan, he suspects, “China won’t bother using a carrier, as it can easily use airplanes that are based 100 miles away on the Chinese coast.”

“Protecting Taiwan’s shores from invasion doesn’t require a navy so much as a robust land-based, but anti-maritime set of capabilities,” O’Hanlon said. “If anything, to get more ambitious on the naval front, the ability to go after Chinese submarines should be the higher priority.”

Despite mounting tensions in the South China Sea, the CCP would like to be seen as “the nice guys” on the international stage, according to O’Hanlon. He argued that the regime’s whole strategy for expanding influence at this time relies on other countries being willing to cooperate and collaborate with China, economically, if nothing else.

Cooperation and collaboration must be the goal long enough for the Chinese regime “to insert its tentacles into the world economy so deeply that individual countries don’t dare challenge it at some point in the future,” O’Hanlon said. “[The regime] will either genuinely try to be somewhat cooperative with most other countries, or it’s going to try to fool other countries into believing that it is.”

Steiner said, “In order to be successful economically, the Chinese regime can’t be seen as an ogre; they have to be patient, as the ogre can come later.”

Thus, in the same breath of tough rhetoric about taking military action against Taiwan, it appears the Chinese regime will also continue to publicly tout the idea of a peaceful reunification for the time being, according to O’Hanlon. Yet he cautioned, “there is still a high enough risk for [military action] to merit considerable attention and concern for the future.”