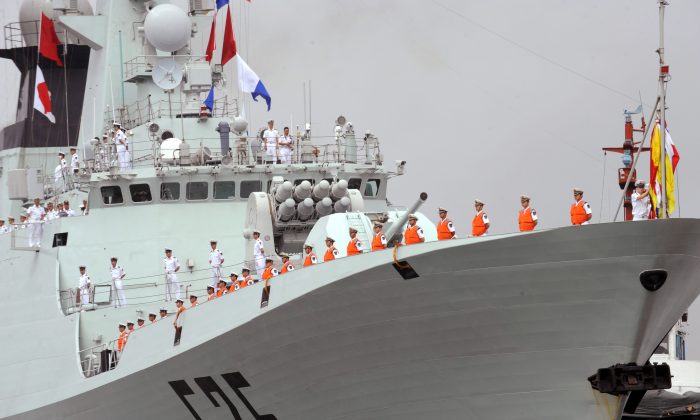 People's Liberation Army (PLA) Navy sailors stand on the deck of a Chinese warship at the international port in Manila on April 13, 2010. (Ted Aljibe/AFP/Getty Images)
Viewpoints

China May Be Arming Its Ships With Space Weapons

The Chinese regime may be placing anti-satellite weapons on its icebreaker ships, according to satellite images discovered by retired Indian Army Col. Vinayak Bhat.

The images show emplacements on the ships that resemble anti-satellite weapons seen on Chinese military bases.

Bhat had previously exposed satellite imagery of secret anti-satellite weapons bases in China, which included testing facilities for electromagnetic pulse (EMP) weapons. The facilities, which appear to include tracking equipment, are stationed in buildings with sliding roofs.

The satellite images of the alleged weapons systems have a similar appearance. Bhat said on Twitter that China was testing EMP generators on its naval ships to work as anti-satellite (ASAT) weapons. He wrote that they are similar to the EMP generators he discovered previously in Chinese facilities in Xinjiang.

According to Jane’s Defense Weekly, the Chinese regime announced it was testing a prototype laser weapon for the PLAN on April 5. It notes several images of the weapons were released on Chinese media, which included “a trainable optical device mounted on a mobile chassis with a large main lens.”

The latest findings from Bhat suggest that the Chinese Communist Party (CCP) has stepped up its deployment of these weapons. He wrote on India’s ThePrint, “Satellite imagery accessed by ThePrint shows China has indeed moved on to testing and weaponizing its naval platforms for space denial.”

It appears the CCP’s ships of choice for these weapons are icebreakers. ThePrint notes the CCP sent two new icebreakers to its Huludao Naval Test and Research Base, and they have been “observed conducting tests and trials for the PLAN’s latest electronic equipment, especially during the summer months.”

The claims are plausible, according to Robert J. Bunker, an adjunct research professor at the Strategic Studies Institute of the U.S. Army War College.

Bunker said in an email that there are strategic advantages for the CCP to be using its nuclear-powered icebreakers for the test: “First, it would have the higher electrical power generation needed to better utilize EMP/ASAT weaponry. Second, it’s only an icebreaker—not much of a ‘military threat’ from a narrative perspective.”

He also noted that if a nuclear-powered ship such as these icebreakers is attacked with a normal weapon, “the attack is considered a nuclear strike, in a sense.”

Because of these factors, it’s less likely that other nations would attack the CCP’s icebreakers, unless it justified the seriousness of the consequences. Bunker said it “creates a really high deterrent value to attacking a nuclear-powered icebreaker using EMP/ASAT weaponry.”

Bunker also pointed to recent Chinese reports that its experimental icebreakers could be, as South China Morning Post described it, a “stepping stone to building nuclear aircraft carriers.” It’s possible that the CCP is using the icebreakers to experiment with various technologies for regular warships.

Included in the executive order is a directive for the Department of Defense to focus on ways to prevent EMP attacks, and on methods to defend against them.