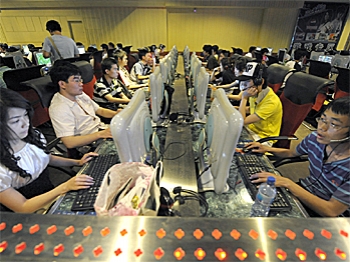 People use computers at an Internet bar in Beijing. The Chinese regime is mandating censorship software for every computer sold in China. (Liu Jin/AFP/Getty Images)
US

A joint letter, signed by U.S. Secretary of Commerce Gary Locke and U.S. Trade Representative Ron Kirk, went out on June 24, urging China to revoke a mandated measure (Circular 226) that would require all computers produced and sold in China to have an Internet filtering system, designed by the Chinese regime, called Green Dam.

According to a statement put out by the Office of the U.S. Trade Representative, in the letter, Locke and Kirk raise concerns that the mandatory rule does not comply with World Trade Organization rules, and also noted concerns raised by global technology companies, Chinese citizens, and worldwide media.

“China is putting companies in an untenable position by requiring them, with virtually no public notice, to pre-install software that appears to have broad-based censorship implications and network security issues,” Locke said.

The letter also notes the flawed nature of the Green Dam software, “Mandating technically flawed Green Dam software and denying manufacturers and consumers freedom to select filtering software is an unnecessary and unjustified means to achieve that objective [denying children access to pornography], and poses a serious barrier to trade,” Kirk said.

The joint letter also called on continued dialogue to help promote the needs of users and the freedom of expression.