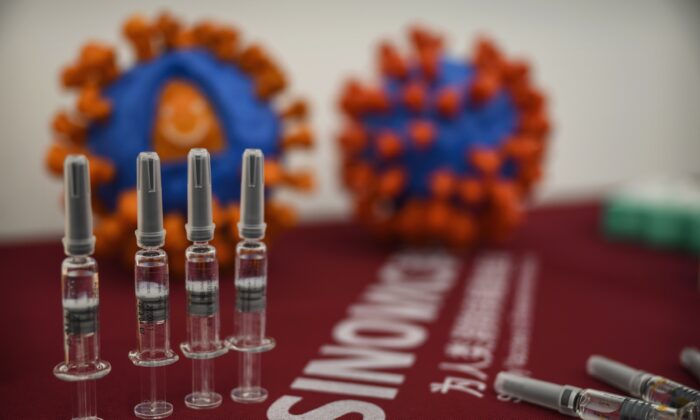 Syringes of COVID-19 vaccine CoronaVac displayed by Sinovac Biotech during a press conference in Beijing on Sept. 24, 2020. (Kevin Frayer/Getty Images)
INSIDE CHINA

A growing number of Chinese citizens who have been diagnosed with leukemia after receiving domestic COVID vaccines say authorities deem their claims to be a threat to social order, and aren’t providing answers to their queries.

Wang Jun (pseudonym), a resident of the city of Panjin, in Liaoning Province, told The Epoch Times on May 31 that his wife was diagnosed with acute leukemia after receiving two Sinovac vaccinations.

“She took her first shot in our town on May 14 last year, a Beijing-based Sinovac product,” Wang said. “Then the second one on June 4.”

Four days later, she developed a persistent daily headache that was resistant to painkillers. It took until Sept. 22 for doctors to conclude, because of an extremely low level of platelets, that she had leukemia. Previously, his wife was healthy, with no history of exposure to toxic substances or blood transfusions, according to Wang. Her family had no history of leukemia.

Wang said that one of his former colleagues developed the same disease, and that there were reportedly six cases of leukemia in his city alone last year.

Ms. Lin, the mother of a 14-year-old girl who lives in Loudi in Hunan Province, said her daughter was diagnosed with myeloid leukemia in November 2021, two months after receiving her second Sinovac shot.

“I believe my child’s disease [leukemia] has something to do the shots,” she told The Epoch Times. “My daughter had had an operation because of congenital heart disease. Before taking the shots, I consulted the [local] CDC, asking if she was qualified to receive COVID vaccines, and they said yes.”

A male surnamed Yang from the city of Jincheng, in Shanxi Province, said he was confirmed to have acute myeloblastic leukemia M2a in April 2022, and had symptoms of severe anemia and limb weakness. He was inoculated with the Sinovac vaccine in July 2021 and developed a large patch of petechiae on his body one month later.

According to Wang, his family has spent more than 200,000 yuan (about $30,000) over eight months for the treatment of his wife’s disease, which he says is a heavy blow to the family.

Lin told The Epoch Times that her daughter’s five courses of chemotherapy cost her more than 500,000 yuan (about $75,072). She said she had to mortgage their house to meet the medical costs.

In China, patients must pay for most medical treatments because general medical insurance only covers a limited number of items that have been preapproved by authorities, and excludes a large number of imported drugs that are more expensive but more effective, and usually have fewer side effects.

Notably, a top Chinese Center for Disease Control and Prevention (CDC) expert gave a vague response to a question about post-vaccination leukemia at a top anti-COVID conference hosted by the Joint Prevention and Control Mechanism of the State Council on May 27.

When asked about the issue, the chief expert on immunization planning at China’s CDC, Wang Huaqing, didn’t confirm or deny the possibility of a connection between COVID vaccines and the subsequent development of leukemia. Nor did he cite any comparative studies indicating a change in the number of leukemia cases pre-pandemic and during the pandemic.

Instead, he emphasized compliance with reporting procedures and relying on a reasonable basis for assessing results.

Wang said that when it came to a medical assessment regarding his wife’s leukemia, different authorities chose to shift responsibility elsewhere.

“Our complaint stayed in our town even one month after we submitted it,” Wang said. “They [local town officials] said they couldn’t report our case to a higher level, which they deem as indirectly demonstrating they have recognized that COVID shots led to leukemia.”

Local officials wouldn’t even provide him with any proof of vaccination.

Wang contacted the local health commission, the vaccine maker, and the CDC, but officials and experts found a variety of excuses to delay their response or refuse to provide an official paper or sign their name on any document.

Wang is still seeking a resolution of his queries from the authorities.

Early in May, an open letter was circulated online calling for attention to the community of those who have been diagnosed with leukemia. However, the original text was heavily censored on the Chinese internet, with WeChat showing a message that the content couldn’t be shown “on suspicion of violating relevant laws, regulations, and policies.”

The letter says: “We have voluntarily collected information on 1,000 plus cases, including vaccine takers, time and location of vaccination, pre-vaccination health status, post-vaccination symptoms, type of leukemia, and courses of treatment. These detailed data and information are of certain statistical significance.”

Additionally, the letter expresses distrust in the assessment from the CDC-approved experts, which show, without exception, what they call a “coincidental” link between receiving COVID shots and developing leukemia.

“A mere theory of ‘coincidental link’ cannot justify the occurrence of more than 1,000 [leukemia] cases among us,” the letter states, refuting the official explanation.

Victims are also angry that the authorities treat them rudely and deem them to be a threat to social stability and targets for suppression, citing a document allegedly leaked from the National Health Commission.

The official document suggests that the top medical authority had recognized the leukemia patients before March 2022. It includes a list of their names, which was given to its branches in each province to monitor their whereabouts in the name of “maintaining social stability.”

Victims and their families have tried contacting domestic reporters and lawyers, although none agreed to help them, according to the letter.

The open letter warned of a potential crisis, as confirmed cases could surface endlessly as long as vaccinations continue and society remains ignorant of the presence of a potential consequence.

There is no known official study linking receipt of a COVID vaccine and a subsequent diagnosis of leukemia.

Finally, the letter urged the leading domestic vaccine maker, Sinovac Biotech, to offer humanitarian funds to help victims and asked the Chinese regime to not see them as “enemies” anymore.

China’s National Health Commission couldn’t be reached for comment despite repeated attempts. Sinovac Biotech declined a request for an interview.